Saracens and Harlequins make it to final of Tyrrells Premier 15s 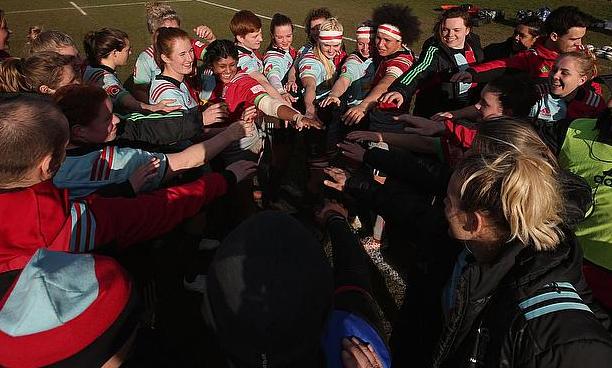 The inaugural edition of the Tyrrells Premier 15s will see Saracens Women and Harlequins Ladies competing in the final following wins over Gloucester-Hartpury Women's RFC and Wasps FC Ladies respectively in the second leg of the semi-final on Saturday.

Wasps entered the game needing a win by seven or more points to make it to the final following their 19-25 defeat to Harlequins in the first leg. Both teams struggled to score a point in the first quarter before Stacey White crashed past the corner to score the opening try for Harlequins in the 25th minute and soon their second try came with full-back Jess Wooden touching down. Harlequins ended the first half with a 10-point lead.

Deborah McCormack and VickiiCornborough scored further tries for the Quins after the break to take their tally to 22 points. Danielle Waterman had Wasps' response but the damage was already done as they succumbed to a 15 point defeat in the second leg of the semi-final.

"We came out today with the goal of getting in to the final, repeating what we did last year as well," said Cornborough.

"We knew we had an absolutely massive challenge on us today, the scoreline last week against Wasps was level-pegging and it could have gone either way today.

"All we could ask for from Harlequins was to go back to basics, do the basics well and simple wins games – that’s what we did today."

Saracens' resounding 0-62 win in the first leg meant Gloucester were left with an improbable task of stopping their opponents from reaching the final. Though they got the first points when Rachel Lund crossed over but Bryony Cleall led Saracens' response. The hosts went on to claim a 19-14 lead at the end of the first half with tries from Helena Rowland and Hannah Botterman as compared to Gloucester's second try coming from Mary-Ann Gittings.

Saracens regained complete control after the break as they stretched the lead to 38-14 with tries from Garnet Mackinder, Marlie Packer and Lotte Clapp. Rowland completed her double and Gloucester-Hartpury fought to the end, with Tandy grabbing the last score of the game that sees Saracens go on to play Harlequins in the final.

Saracens skipper Clapp is pleased with the way the team dominated the proceedings to reach the final.

“We came together again as a team today, we took from what we did last week and built on it through training.

"We didn’t play as flowingly as we did last week but we did what we had to do get to the final and that’s what we’ve been aiming for all season.

"It’s going to be tough against Harlequins, last time we played them we came away with a loss which is unfortunate, but we know from that first game that we can get points against them.”