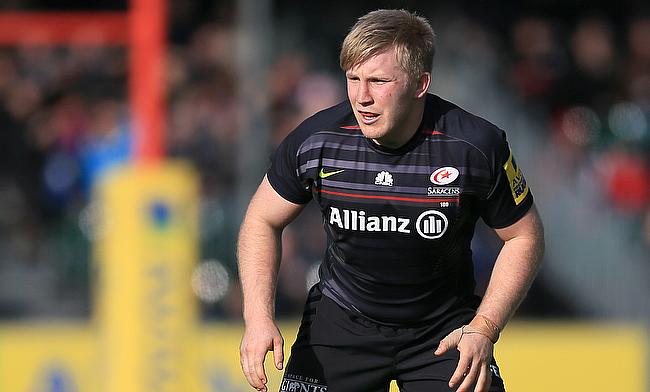 Saracens secured both first place in the Aviva Premiership table and a home play-off semi-final with a combative 23-14 win over Newcastle Falcons at Allianz Park.

However, a brace from Jackson Wray regained the hosts' advantage and England star Maro Itoje thenput the game out of sight with a score of his own.

It was an emotional afternoon at Allianz Park as Sarries fans said goodbye to Namibian flanker Jacques Burger following his last match before retirement and Newcastle cemented their top-flight status even in defeat.

Both sides had opportunities in the opening 10 minutes as a sedate start was punctured by some quick ball from Newcastle, with only resolute defending from Saracens denying the Falcons an early score.

Sarries had a good chance themselves on eight minutes, when Chris Ashton intercepted a risky pass by Adam Powell on the Newcastle try line. Ashton fed the ball back to Wray, but he was unable to control it and knocked on.

The home side broke the deadlock on 18 minutes when Newcastle were penalised for not releasing in the tackle and Hodgson coolly kicked the resulting penalty from just outside the 22 on the right-hand side.

Newcastle almost struck back immediately when a blistering run by Michael Young took them deep into Saracens' territory but was halted 10 metres from the try line.

But Mark McCall's men lost the ball from the resulting scrum and Newcastle shifted the ball to the near side rapidly, with Chris Harris timing his hand-off to Watson to perfection.

Watson met the ball on the run and powered to the corner to put the visitors ahead, with Craig Willis adding a difficult conversion from the touchline after the TMO confirmed the score.

Sarries missed a chance to cut the deficit to one point on 24 minutes, when Hodgson hit the post after Falcons were penalised for not rolling away.

But the visitors had the better of the first half and took full advantage when they scored a second try just before the break.

A good kick behind from Willis opened Saracens up and Watson collected it and squirmed his way to the line, with Richard Wigglesworth clinging to his ankles to send the Falcons into the break 14-3 ahead after Willis converted.

Sarries started the second half sharply and Wray forced the ball over from a maul, but Hodgson missed the conversion to leave the gap at six points.

Burger was then withdrawn to a standing ovation and that seemed to galvanise both the crowd and Saracens players, as they regained the lead seconds later with an almost identical try to their first - Hodgson adding the conversion and then a long-range penalty to make it 18-14.

Itoje then put daylight between the two sides with a try on 69 minutes after yet another strong maul from the home side, but Hodgson missed his fourth kick of the day to leave Newcastle nine points behind.