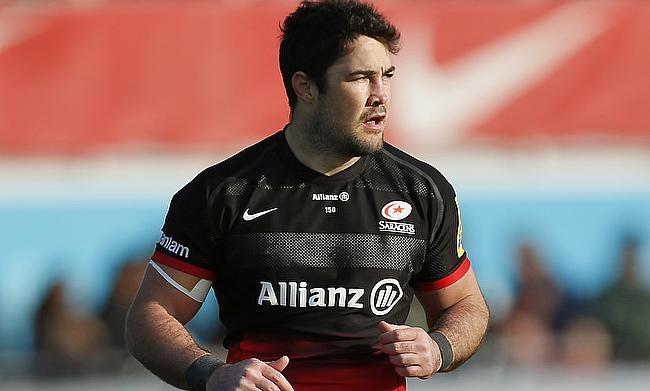 Brad Barritt admits it will be "the icing on the cake" if Saracens are crowned European champions this season.

A 24-17 semi-final victory over Aviva Premiership rivals Wasps at the Madejski Stadium means Saracens will face Leicester or Racing 92 in Lyon on May 14.

It will be Saracens' second European final appearance in three seasons, but England international centre Barritt has no doubt that his team will remain grounded during the build-up.

"In terms of frustrations in the past, by no means have we won anything yet," Saracens skipper Barritt said.

"There is still this hunger and desire within this team. We now have a final to look forward to and prepare for.

"The pleasing thing with this team is the resilience. The things we speak about at length, but more importantly put into practice.

"We know that every team is going to have their 'golden moment' in a game, and it's about staying focused for your next task. That's what we did - we applied the pressure.

"The hugely-pleasing thing about this team is that there are on-field generals across the pitch. There are guys who are leading in their own departments and are making a stand and helping and coaching each other off the ball.The resilience within the squad is huge.

"It (winning the European Champions Cup) has been a driving force for us for five seasons now. We've slowly edged our way closer and closer. We've gone from qualifying to a quarter-final, two semi-finals and a final.

"It would be the icing on the cake to lift the trophy, but we are not there yet and we are not going to talk about it until it happens. But it's a huge driving force, and this team is very hungry for that success."

Saracens took another giant stride towards a possible domestic and European double, although the Premiership leaders were tested physically by a resilient Wasps side.

But flanker Michael Rhodes' first-half score, which was followed by a penalty try that Owen Farrell converted as part of a 14-point haul, proved enough.

Wasps led through an early Dan Robson try and substitute hooker Ashley Johnson touched down late on, with fly-half Jimmy Gopperth kicking both conversions and a penalty, but Saracens dominated large chunks of possession and territory and were worthy winners.

Saracens rugby director Mark McCall added: "I thought we were brilliant today. We were physical and intelligent in the way we played the game, but we couldn't get away on the scoreboard.

"There were times today when we could have got a little bit frustrated - obviously after one minute when you are seven points behind - but we felt we dominated the rest of the half."

Wasps rugby director Dai Young said: "They had a bit of a stranglehold on us in the first half, and you have got to give them a lot of credit. We struggled to break Saracens' defence down, but we kept on playing.

"We have come a long way in a relatively short space of time and maybe their experience over the last couple of years in some big semi-finals perhaps gave them a little bit of an edge.

And Wasps captain James Haskell added: "When you play a game like that, you get the initial disappointment, but we gave it everything we had.

"Credit to Saracens, they are a team that plays that strangling rugby a lot of the time, and it is very difficult to make inroads. When we did, we looked very dangerous.

"They see an opportunity. If you are on the front foot going at them, then that kinds of stops them, but if you don't, it kind of plays a little bit into their hands and it is very difficult to deal with."