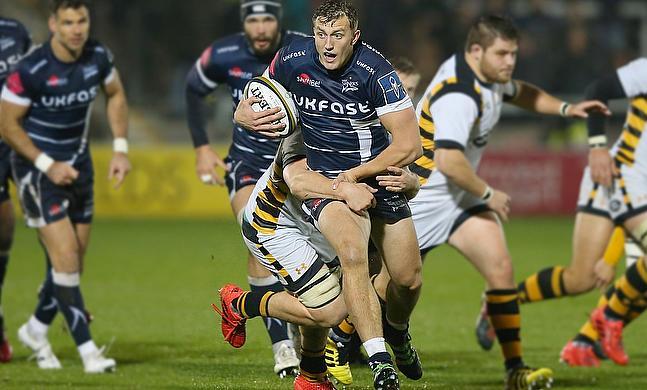 Former Australia captain George Smith joins Bristol Bears on short-term deal
Bristol to enter Premiership next season with rebranded name of 'Bristol Bears'
Bristol promoted as Ealing fall to Doncaster
Sam Bedlow: “Moving to Bristol is something I needed to do in order to reach my ambition”

Sam Bedlow is determined to put a frustrating year behind him as he looks to hit the ground running with Bristol Bears this season.

The former Sale Sharks centre moved to Ashton Gate at the beginning of the 2017/18 campaign, but Bedlow suffered multiple injuries throughout the term.

After missing a large chunk of the beginning of last season, Bedlow was sent on loan to Hartpury RFC where he once again found himself on the sidelines.

But after a year of hardly playing any rugby, the 23-year-old insists he is now fully fit and ready to make his mark at Bristol.

“Unfortunately, I spent most of last season injured,” Bedlow said.

“I had quite serious injuries. After the second game, I tore two ligaments in my ankle so I had to have an operation. That put me out for about four months.

“After that, I came back and I was sent on loan to Hartpury playing in the Championship still. In my first game for them, I torn my hamstring so I was out for another four or five weeks! It wasn’t the best!

“I did come back to play a few more games towards the end of last year, but I am all fit and ready to go now.”

In an interview with TRU last year, Bedlow admitted he had to move to Bristol in order to further his career which meant leaving his boyhood team, Sale, behind.

Bedlow may not have featured much for the southwest side last year, but Bristol are a club heading in the right direction.

?? | Fantastic to see our proud city getting behind the #BristolBears ??

With Pat Lam at the helm, Steve Lansdown’s backing and some high quality signings, Bristol returned to the Premiership in emphatic style last term and they are out to make an impression in English rugby’s top division this season.

Bedlow added: “Obviously when Pat Lam came in, it is a totally different coaching style to what I have received before which is always a good learning curve. It makes you a better player.

“The detail the coaches go into here is massive. Every little detail you do, it gets picked up on. If it is wrong, you get called out for it. I have never seen that level of detail before so it is really good.

“Everyone knows the support we have got from the Lansdown’s and it’s a really good club to be at. They know what they want to do and they know where they want to be as a club.

“We have set some goals, but I don’t want to reveal too much! We just want to really show what we are capable of. It is a great environment at the minute so I am looking forward to what this season brings.”

Bristol kick off the new campaign with a mouth-watering fixture against Bath at Ashton Gate on 31st August and Bedlow is keen to be a part of the West country derby.

The #GallagherPrem fixture all in one place??

Subscribe to sync the fixture dates?? and kick-off times automatically with your device ??https://t.co/PbTCpliS0h pic.twitter.com/sMxmegApWs

Before that though, the Bears have an ‘in house’ pre-season friendly with Hartpury this Saturday before games against Scarlets, Nottingham and Connacht.

Below said: “Pre-season has been really good and we have our first game this weekend so it would be good to be involved and show what I can do this year for Bristol again.

“It is a massive chance for me. There are a number of good centres in our squad so if I can get the chance to put out a good performance in the first game, that puts me in good stead for that home game against Bath so that is what the plan is. I am looking forward to it.”