Sam Bedlow: “Moving to Bristol is something I needed to do in order to reach my ambition” 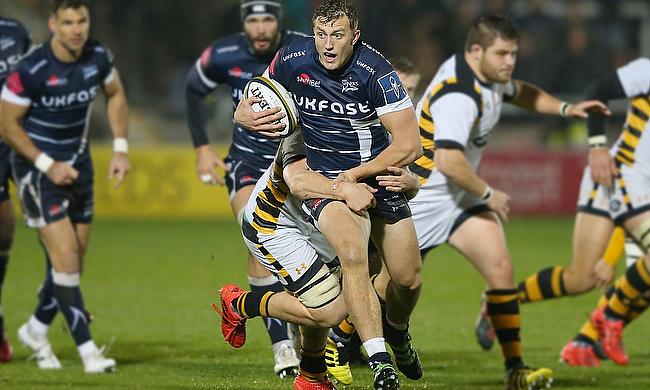 Sam Bedlow in action for Sale Sharks against Wasps
©PA

Sam James: 'England call-up was a big surprise and a massive honour, but I still have to improve'
Bristol make three more additions to squad for next season
Seb Negri: The Italian Job
Mat Protheroe: “It has been a quick transition, but I know I have a long way to go.”

With the domestic season coming to a close, one of Bristol Rugby’s newest recruits tells TRU how moving to Ashton Gate was a must.

It is when we discuss Sale Sharks that Sam Bedlow really opens up and the next step in his journey takes a back seat.

There was a moment in his short career when the now 21 year-old arrived at Sale training for the very first time not knowing what to expect. He was left in awe as players which he had watched on a regular basis whilst growing up walked past him. Bedlow is very fond of Sale and that aforementioned experience makes it blatantly obvious.

“I remember my first day when I arrived at training, seeing the likes of Mark Cueto and Danny Cipriani,” he says.  “I was a bit star struck!” But despite his amazement at seeing some of his role-models, he knew his time to impress was there and then. “They have a lot of senior players that go out of their way to help the younger lads and everyone is just in it for the club and not themselves. It helps you settle quickly and focus on developing as a player.”

Bedlow has every right to be gushing about his first experience with the senior team. Because of where he is from and his path into professional rugby, his decision to recently leave the club he has watched all his life would not have been an easy choice. For any ‘fan’ to part ways with your team is tough, but signing a deal at Championship side Bristol is something which Bedlow insists he had to do in order for him to continue becoming a better player.

When he joined Sale’s academy after his time at Myerscough College four years ago, Bedlow may have thought his dream chance had arrived, but that wasn’t the case. He then worked hard to force his way into Steve Diamond’s first team plans and he appeared in Europe as well as numerous Angelo-Welsh Cup matches including against Wasps where he scored his first try for his boyhood club last November. However, Bedlow played on just two more occasions for Sale against Bristol and then Exeter Chiefs in the Premiership before he had to make a difficult call.

“It is a club which I have grown really close to and it is a club that I have always been to watch so it was a huge thing for me to run out on that pitch wearing the Sale shirt,” he says – but those special appearances just wetted Bedlow’s appetite to continue playing even more.

“Sale offered me to stay there, but they have signed some new wingers and that brought Will Addison into the centre which he prefers and he has done so well this season which meant little game time for me. You can train as much as you want, but for me at this stage of my career, I need more game time otherwise I am not going to develop as a player. Sale is obviously a club close to my heart but I need to keep playing to reach my ambition. “

Bedlow has always been ambitious. He began playing the game aged four when he joined his local club and now National Three North side Rossendale where he graduated through the age groups before joining Myerscough after finishing his GSCEs at Hasslington School. The next logical choice for Bedlow was taking full advantage of the College’s link with Sale and he did just that. “It was something I had always aspired to do when I first started playing rugby and to be part of Sale was unbelievable.”

“With Sale being the way it is, they don’t run a big squad so they do rely on the younger lads to develop a lot quicker than they would elsewhere. You get a lot of exposure in training when you are with the first team. I think it is a place where you have to go and not shy away from the challenge.”

It is fair to say that Bedlow fronted up to the obstacles and tests that were thrown at him including a recent loan successful move to National One side Fylde. He admits playing at that level was great for his development, but he knew that becoming a mainstay at Sale was something that may not happen.

While that realisation crept into his thoughts a couple of months ago, his determination to develop as a player still burned bright. The call then came from Ashton Gate and the next chapter of Bedlow’s career is now in full swing.

“All my family are up in Manchester so moving away from your family and moving away from a club which I have watched all my life as well as friends I have made at Sale is tough, but at the end of the day, it is something I had to do for myself. My decision was only because I wanted to improve as a player and as a career move, it is the right thing to do to make myself better.

“Bristol have really strengthened their squad up for next year and with Pat Lam [Director of Rugby]  coming in, he is a top class coach and he is only going  to further that development at Bristol and he will be keen to leave a legacy at the club.

“I have had a few conversations with him and he sounds like he wants to take the club somewhere. He won’t just let Bristol sit in the Championship. He will want to try and guide the club back into the Premiership because he is keen to achieve something at Bristol and that is something I want to be a part of.”