Sale Sharks' Paul Deacon: “We have got to try and break the cycle” 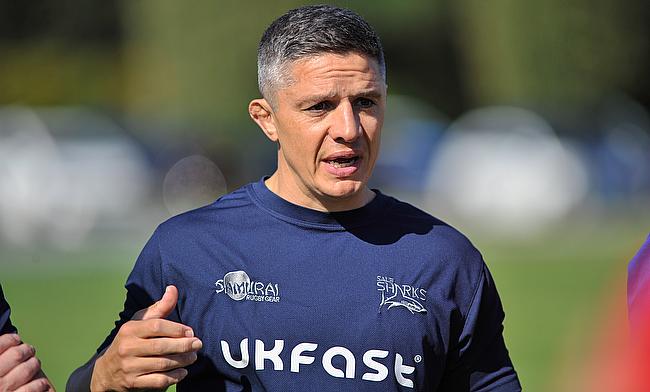 If Sale Sharks’ second-half performance against Toulon had done Steve Diamond “proud”, I wonder what the former Director of Rugby would have made of the club’s recent showings over the last two weeks.

By no means have Sale been gobsmackingly poor, but after seemingly putting themselves in a healthy position at the AJ Bell Stadium against Edinburgh and Wasps respectively, they let the second 40 minutes pass them by on both occasions.

In Europe, Sale’s cohesion disappeared as Richard Cockerill’s side came from 12-0 down to leave Manchester with a victory, whilst last weekend, a lapse in concentration saw Wasps score two quick-fire tries which ultimately cost the disjointed Sharks the game on their return to Premiership action.

An adventure in the Champions Cup has all but gone and it now means there is a sharp focus on Sale’s domestic ambitions ahead of their trip to Gloucester this weekend.

Their painful loss to Wasps on Sunday means the sense of optimism at Carrington has been slightly dampened and some would argue Diamond’s departure has played a major part in that.

"What I’d like to say to our fans is that we may have lost our leader, but I think we are in good hands.”

The shock departure of their Director of Rugby took people by surprise, but can Sale Sharks continue to shine without Steve Diamond?https://t.co/pqEp5M5yES pic.twitter.com/IWdL1rb8ZO

Stepping into his shoes was always going to be an unenviable task considering the amount of blood, sweat and tears Diamond poured into ‘his’ club and current interim boss Paul Deacon is keen to halt Sale’s slide following three successive defeats under his stewardship.

“I said the week that it happened [Diamond’s exit], everybody at the club owes him a lot and he is the reason why we are all here, myself included,” Deacon said. “It was a big change, but the lads have cracked on.

“Now we have got to break the [losing] cycle and hopefully we will do that this week. I think you learn the most when things aren’t going perfectly, but if those things keep happening, then I am under pressure. Wins don’t just miraculously appear from nowhere.

“I would always be questioning what we were doing whether we won or lost. Whether we win or we lose, we can always get better in my opinion. I am confident that what I am trying to do is the right way to go, but a win would be nice this weekend, but we have to focus on the performance.”

The ‘pressure’ that Deacon alludes to is a by-product of Sale’s improvements over the last year or so. From being satisfied with midtable security, the Sharks challenged for the title again in 2019/20 and clinching their first piece of silverware for 14 years [the Premiership Rugby Cup] would have added to the expectations around the club.

Deacon - who also insisted there was no update in regards to a permanent successor to Diamond despite Sale being linked with ex-England coach Stuart Lancaster and former player Alex Sanderson - has continued to stress that Sale supporters can expect minimal changes to the style of play which has elevated the Sharks back into the conversation for honours.

However, one of the challenges the former England and Great Britain Rugby League half-back has is finding his own voice and stamping his own leadership style on a talented group of players.

“On the rugby side of things, not much has changed,” Deacon added. “I am a different type of leader than Dimes. We are different characters.

"The big issue for him is finding his own voice, at a time when there has been just one dominant voice over the last 10 years."@andNickMullins discusses the challenge facing Paul Deacon at @SaleSharksRugby ??#GallagherPrem pic.twitter.com/xlNfTu5K15

“I think if you ask the lads, I do sort of lead and manage a little bit differently to him in my own style. If you are leading people, you can’t be fake so I can’t be a Steve Diamond. I have to be myself so from that side of things, I think things have changed.

“Whether it is for the good or the worse, time will tell. At the minute, I have not managed to get a victory at the end of the week which is the important thing so I need to keep improving.

“I have learnt a lot about myself. I certainly don’t sleep as much as I used to do! I am just trying to do the right thing all of the time. I won’t always get it right, and I am sure every coach will say that, but I am trying very hard to keep the boys positive and also improve them.”

Some would argue perspective is needed here too. Deacon has only had three games as the ‘main man’ at Sale and his side remain in the top four of the Premiership despite last weekend’s defeat.

On Saturday, the Sharks visit Gloucester [11th] who, unlike Sale, would have taken confidence from their last two outings following a slow start to the season. Their dramatic victory over Ulster has kept the Cherry and Whites’ European aims alive whilst George Skivington’s men did make life difficult for Premiership champions Exeter Chiefs on Boxing Day.

As for Sale, they have won their last two trips to Kingsholm so a trio of successes in the West Country would be the perfect way to begin 2021 for the Sharks.

“We had an honest review after Wasps,” Deacon said. “The senior group had a big hand in it, getting their feelings out there and how we can do things better. We spoke about areas we need to get better at and reacting to adversity better than we did in that game. It is about getting back on track and not dwelling on areas and mistakes.

“We are raring to go for the weekend. Gloucester are a tough team. They are going to be hard to beat. They are a good, solid team that do a lot of the basics very well so we have to be at the top of our game to get any kind of result at the weekend.”