Niall Annett: Podcasting, painting and the need to help others 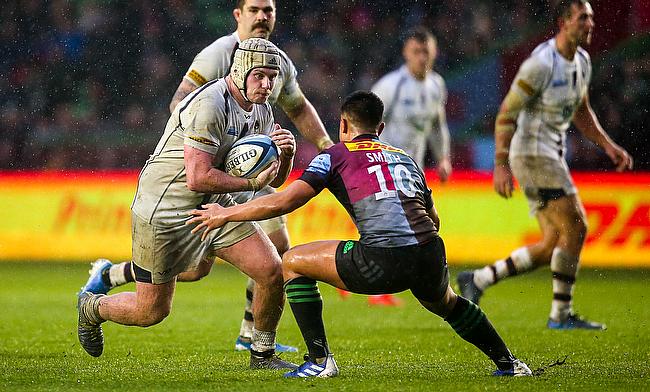 For professional athletes during this coronavirus pandemic, the daily routine of turning up to training and preparing for a specific event has been put on hold.

The 2020 Olympic Games in Tokyo was the latest sporting spectacle to be confirmed as postponed, joining the ever-growing list which of course includes the Gallagher Premiership. For the last nine days – since the RFU suspended all rugby activity in England - Worcester Warriors’ Niall Annett has seen his everyday life come to a standstill.

Last December, the forward signed a new two-year deal at Sixways but now the rough and tumble of English top-flight rugby has been replaced by individual workouts at home. Speaking on the phone on Tuesday, Annett was philosophical about the wider situation we all find ourselves in.

“It’s quite surreal, but the important thing is that everyone remains calm, sets themselves targets on a weekly or daily basis, and we just follow the guidelines,” he says.

“I can sense a lot of people are getting quite frustrated and anxious about this, but the reality is, there’s very little we can do other than stay at home. As a professional rugby player, this is unprecedented for us but it’s unprecedented for everyone so we have all got to remain calm and keep going.”

Following government advice today, the RFU will suspend all rugby activity in England, at both professional and community level.

Please read the full statement below on our website.

Annett is in good spirits and jokes that he has had time on his hands to sort out a ‘big cupboard’ of paperwork which he should have tidied three years ago whilst he is also helping his wife, Claire, paint the house. “One of the most important things for myself and Claire is basically creating a routine! We set an alarm just as we would if we were going to work. I’ll definitely train and she might jump in and jump out. We will get some cardio done in the morning, get some work done, have breakfast and just fill the day with stuff. It makes you feel like you are making some sort of progress and productive gains.”

The Worcester forward has also launched his new podcast, Wind Yer Neck In, which has already featured Alex Grove and Chris Pennell, with Saracens’ Nick Tompkins set to be Annett’s next guest. “I have actually been quite busy! I can’t believe I am actually saying that! The podcast is something I really enjoy doing because I get to be quite creative which is great!”

If he isn’t putting his teammates in front of a microphone, Annett has been contacting them regularly via WhatsApp and the Worcester group chat would have had something to smile about last weekend after a video emerged of lock Michael Fatialofa, walking unaided, less than 11 weeks after a serious neck injury.

The 27-year-old has been in hospital since January 4th after suffering a spinal injury against Saracens and the forward had to spend two weeks in intensive care. “We are just so delighted to see him making the progress he is,” adds Annett. “Having gone down to see him, it is not a surprise the attitude he and his wife Tatiana have taken to this challenge. It is just one of the most inspirational things I have come across.”

Annett also revealed club doctor Nick Tait has created a forum for players who are living on their own and may have concerns during this difficult time. The Worcester forward admits the daily existence can become ‘very lonely’ if you have no-one around to talk to and with mental health awareness constantly in the spotlight, the forum allows players to express their feelings if they are anxious.

The support Worcester are offering doesn’t just aid the players. Annett is an integral part of the club’s community work and earlier this week, the hooker – along with Ethan Waller, Sam Lewis, Justin Clegg and physio Dan Walton - volunteered their time to collect and deliver shopping or prescriptions for vulnerable people who are unable to leave their homes due to the coronavirus outbreak.

Following the new government guidelines which were announced on Monday evening, it means the club will not be able to continue with this but Annett insists there is still many different ways in which he and his teammates can help.

Whilst doing this as safely and sensibly as possible, we want to help: get in touch and lets look after eachother. Be kind and be safe. ??? https://t.co/XVNn2HQEtJ

“Part of my rugby career and experience has developed in terms of trying to give back as much as possible,” he says. “As the Acorns Hospice ambassador, I get to support families and their children on a bi-weekly basis but in terms of the scenario we are in now, it is just about offering help to people who maybe can’t get out there to get their groceries or prescriptions or anything like that.

“We will also be trying to offer communication for people who are feeling lonely or feeling down. We will look into picking up the phone or sending emails but I think the most we can do is try and reach out a hand to people and show them we can face this together and make sure we can get through this. It takes no time at all for us to lift someone’s day. The more we can do out there, the better.”

In terms of rugby, Annett admits he would love to see the Premiership season come to a conclusion as the forward was returning to full fitness before the suspension of the campaign, but it is, as he says, a “wait and see process now”.

“Obviously as a player, you love to build that momentum and I felt like I was getting back to that point after a couple of injuries,” Annett says. “It is a strange situation, but rugby has to come second at the moment. You have to focus on the bigger picture.”