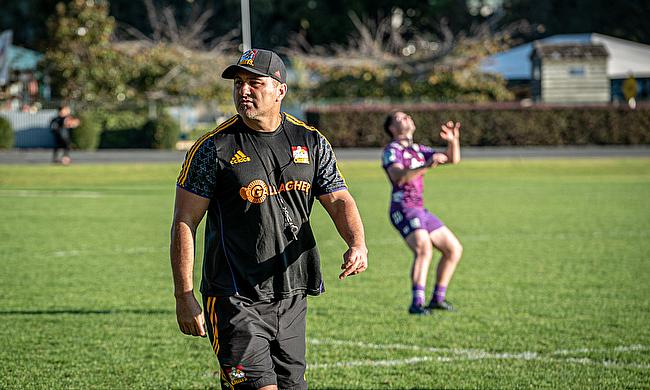 Dane Coles: “We respect all the decisions that have been made”
Scott Barrett signs new deal with New Zealand and Crusaders until 2023
New Zealand players to resume training on Monday

Last week Talking Rugby Union heard from All Blacks hooker and Hurricanes Dane Coles about the restart of rugby in New Zealand. This week, TRU hear the thoughts from former All Black wing and current backs coach at the Chiefs, Roger Randle.

Led by Lions coach Warren Gatland, the Chiefs were sat in fifth place in the overall Super Rugby standings prior to the competition’s cancellation.

It was a strong year for the New Zealand franchises, four of the five sides all reaching the playoffs, with the Highlanders being the only team to not reach the knockouts.

The country having now seemingly overcome its pandemic, Super Rugby Aotearoa will take place between the five Kiwi clubs over 10 weeks. Having not played since March 13, in a home loss to the Hurricanes, backs coach Roger Randle says that the side are adjusting to the social distancing measures that have been implemented.

“We don’t huddle up as much and instead of team meetings, we just go on the field and explain what training looks like,” Randle said. “We have still got team videos that we put on for them to watch in their own time, we still have one-on-one’s with distancing there. We have just got to make it our norm and we just find a way.

“Obviously we have got the contact area (where social distancing can’t be avoided) and any time other than that, we are keeping those practices in place. The boys come in, in the morning, do their temperature, we’ve got hand sanitiser and every time that they leave the environment, they’ll sign out.”

Also having a longer lunch break, players now return to their homes in order to shower and have meals individually prior to returning to training in the afternoon. Pleased with the condition of his players coming back from a period with less day to day scrutiny of their fitness, Randle says that the team were extremely motivated to stay fit for rugby’s return.

“A lot of our guys are intrinsically motivated,” Randle says. “We had some guys that had pretty well-prepared gyms. Muscle mass for some guys is a little bit down, but running wise they are really, really fit because they have all stayed close to a park, which is fortunate as where we are is quite a rural town.

“There is plenty of places for them to go on a run and there are some really good results from our fitness testing. Gym wise we are slowly getting into that sort of stuff and with the contact, we are slowly progressing that.”

With eleven All Blacks in the Chiefs squad, in spite of star lock Brodie Retallick opting out of the Aotearoa competition, the Chiefs squad is blessed with talent. With Aaron Cruden, Damien Mackenzie, Anton Lienert-Brown, Brad Weber and many more within his ranks, Randle has certainly got the players available to be more than competitive in the tournament.

“All the players and management, we all look forward to our local derbies,” Randle said. “They are really physical and brutal. We have eight or nine of them over a nine, 10-week period. The attrition rate is going to be massive, so your full depth in the squad is going to be really important and everybody is going to contribute.

Pulling on the black jersey twice in his playing career, Randle was unfortunate to have played in the era that he did. A wing comfortable in the centres too, he had the likes of Jonah Lomu and Tana Umaga to contend with. Winning two gold medals at the Commonwealth for New Zealand, Randle has coached for over 10 years now.

Coaching Waikato as an assistant, as well as the Maori All Blacks, Randle has also been involved with Japan Sevens and even the All Blacks Sevens over the years. He even coached against his current boss, Warren Gatland, when the New Zealand Barbarians faced the British and Irish Lions on their 2017 tour.

Running the Lions close in a good test at Okara Park, the tourists only won by six points and Gatland’s son, Bryn, was one of the star men for the home side. The majority of the squad that Randle led that day have found themselves at Super Rugby sides, with Gatland junior now the understudy to Beauden Barrett at the Blues.

In fact, Clayton McMillan, who led the New Zealand Barbarians that day, will be taking the reins from Gatland at the Chiefs when the former Wales coach leads the Lions for a third time. Working with Gatland at Waikato in the mid-2000s, Randle says that he is enjoying their time at the Chiefs.

“He is respected all around the world with his coaching and back here he’s been awesome,” Randle said. “He has given us the autonomy as assistant coaches within our portfolios to run that. He’s very comfortable to be challenged. We have some healthy debates and he has got a lot of experience and I have enjoyed working with him. The players love him too.

The Chiefs start their Super Rugby Aotearoa campaign against the Highlanders at Forsyth Barr on the 13th of June.