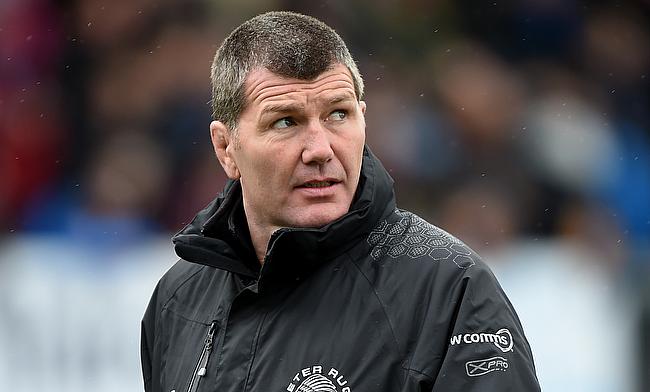 Exeter head coach Rob Baxter has urged his team to give their best performance when they take on the defending Aviva Premiership champions Saracens in the upcoming clash at Allianz Park on Saturday.

Exeter Chiefs will be heading into the game on the back of five consecutive wins, which also includes triumph against Leicester Tigers and Bath Rugby. They are currently third in the table with 39 points and a win on Saturday can help them close the gap over Saracens, who are positioned second with 46 points.

Admitting Saracens will be a tough challenge for Exeter Chiefs, Baxter feels it will be an opportunity for his team to prove a point.

"I don't mind admitting that Saracens have dealt with us very well the last few times we've played them," Baxter said.

"We have definitely got to improve our performance levels from the last couple of times we have played them. We've got to hit the pitch in the right fettle right from the start and not let the game get difficult for us on the scoreboard too early.

"We have fought our way into the top four. It's another top-four clash, and we have come through two of them in the last two weeks. It is not a bad run of games to be on.

"I am pleased we have pushed back into the top four because the destiny of our Premiership season is back in our hands, and that is how you want it to be.

"Obviously, plenty of things will happen between now and the end of the season, but you've got to look at these as opportunities. It's an opportunity for us to go out and show some really good qualities and do something a little bit special within the league."

The 46-year-old also had high praises for Mark McCall's men and urged his players to be at their best, if they are to beat the double champions on Saturday.

"Sometimes they (Saracens) get unfairly labelled as being one- dimensional in the things they do.

"But what they do have is a good structure and good organisation, along with a lot of good players who buy into that structure and who are also able to break out of it very quickly to great effect.

"That not only allows them to maximise their effort and work-rate, but they also take advantage of mistakes you make and they have quality decision-makers who can really punish you.

"That is why it's important we turn up with the right attitude from minute one on the weekend, and that our energy levels and our focus are spot-on."