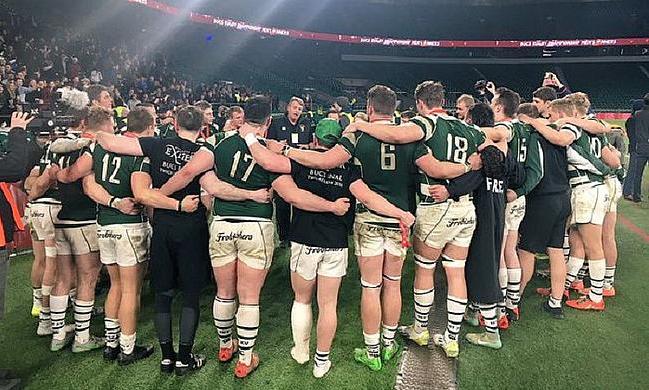 Hartpury return to top with wins over Northumbria and Leeds Beckett
Greenwood: “You won’t find a bigger fan of University Rugby than me”
Loughborough move to the summit of Super Rugby

The bonus-point win for Exeter throws the BUCS Super Rugby division wide open, with the Green and Whites now sitting in third and just five points behind Hartpury College.

Loughborough are now up to second in the table and a point adrift of Hartpury after a convincing win over Northumbria while Leeds Beckett are still searching for their first victory of the term as a last-gasp try denied them the win against Durham. In the other fixture in the division, Cardiff Met were edged out by Bath.

Elsewhere across BUCS, Nottingham Trent remain top of North A while Edinburgh, Leeds Beckett 2nds and Leicester all continued their superb form. In the Women’s competition, last year’s finalists - Cardiff Met and Northumbria - made no mistake in their respective divisions.

Exeter ended Hartpury College’s 100 per start to the season as they thrashed the league leaders to earn their sixth straight victory.

After a slow start to the season, the current BUCS Champions have recaptured their form from the last campaign as they looked unstoppable on home soil.

Callum Roberts scored a brace while Dom Thorne, Callum Young, Charlie Wicks, Rauf Birler and Jack Owlett all went over for the hosts.

Hartpury grabbed tries in either half, but it was another tough trip to Devon for John Barnes’ men who have not beaten Exeter on their own patch in their recent history.

Exeter Director of Rugby Keith Fleming: "Extremely happy with how the game went. This is one of the best performances I have seen in my time here at Exeter. Hartpury are a very good side and we knew we were going to have to match their intensity from the start and we did just that."

Northumbria claimed their first win in BUCS Super Rugby on Friday night when they narrowly beat Cardiff Met 32-31, but they were on the end of hammering yesterday which wasn’t helped by a red card shown to Michael Walton after just six minutes.

The away side reacted well to the flanker’s dismissal as Charlie Parkhouse’s try briefly gave them the lead in this contest.

However, Loughborough cut loose after that as Watson, Mark Dixon and Will Elt all crossed before the break to give the home side a 25-8 advantage

Watson then completed his hat-trick in the second-half and was joined by Joss Linney, Quentin Koster, James Page and Dixon again, who all touched down.

Northumbria grabbed a late consolation try, but this was a comfortable and impressive victory for Loughborough.

A late try from Brodie Wilson saw Durham come from behind in a frantic finale to secure an exciting BUCS Super Rugby win over Leeds Beckett at Headingley.

Trailing 15-0 just after half-time thanks to tries from Jona Marshall and Harry Newborn, Durham’s Rob Stevenson got one back before Nathaniel Opedo crossed shortly after to reduce Beckett’s lead to just three points.

David Mcilwaine opened up some breathing space for Beckett with a penalty on 67 minutes, but his side were under the cosh four minutes from the end. Tom Bullough was yellow-carded and Durham took full advantage of their extra man as Wilson snatched the win for the away side right at the death.

A late Cardiff Met score wasn’t enough as Bath held on to earn a narrow victory and also pick up their first win in four matches.

Bath led 10-6 at the break thanks to a penalty from Hugo Stiles and a close range try, with the visitors’ power up front proving the difference in the first period.

Tom Morgan had kicked two penalties to keep his side firmly in the game, but it was Bath who extended their lead just two minutes after the interval with their second try of the afternoon.

The away side continued to hold that lead in this encounter and were only troubled when Cardiff Met crossed though Alex Dombrandt following nice build-up play to set up a tense finale. However, Bath held on to their lead to seal a much needed win.

In North A, league leaders Nottingham Trent stay top of the division following a 33-22 victory over Loughborough 2nds who have now lost six of their last seven matches. Their city rivals, Nottingham, are now three points behind Trent as they returned to winning ways in style as they beat Durham 2nds 42-9. Elsewhere, Newcastle are third in North A following a convincing 26-0 victory over Bishops Burton while Leeds secured their fourth win of the season as they beat Birmingham 57-46 in Yorkshire.

Hartpury College 2nds did what their 1st XV couldn’t in South A as they picked up an 18-20 victory away at Exeter 2nds while elsewhere, the University of South Wales beat UWE 20-17 and Swansea thrashed King’s College 48-7.

North B returned this week following BUCS Trophy action eight days ago and league leaders the University of Edinburgh maintained their 100 per cent start to the season in some style. They demolished Worcester 106-7 at home to secure their seventh straight win in all competitions. St Andrews remain in second placed despite suffering a 36-38 loss to Manchester which was the north-west outfits’ first win of the season while in the other fixture in this division, Durham 3rds failed to take advantage of St Andrews’ misfortune as they too fell to a defeat as they lost 32-31 to Strathclyde.

In South B, Exeter 3rds went top of the division as they secured their sixth victory of the season after beating Portsmouth 65-12 away from home while Southampton thrashed Bristol 2nds 52-21 to clinch their second win of the campaign.

Northern 1A league leaders Leeds Beckett 2nds made it five wins on the bounce as they thrashed bottom of the table Lancaster 89-5. Their lead at the top is just three points as Sheffield sealed back to back league victories as they beat Newcastle 2nds 51-26. Elsewhere, Durham 3rds edged out Hull 29-27 in Yorkshire.

After a week of cup action involving sides in Northern 2A, league commitments were back on the agenda, but there was only one fixture in this division. Second placed Manchester Met moved to within a point of league leaders Liverpool as they thrashed UCLan 78-7 to secure their fifth win of the season.

Northern 2B also returned after a week of cup duty and there was a full fixture list too.  League leaders Northumbria 2nds returned to winning ways as they beat city rivals Newcastle 3rds 41-15 to move two points clear at the top of this division. Second placed Leeds Beckett 3rds edged out York 23-22 while Sheffield Hallam made it two successive triumphs thanks to a 20-5 victory over Leeds 2nds.

In Midlands 1A this week, Leicester stretched their lead at the top of the table to 10 points thanks to a comfortable 31-14 win over second placed Nottingham 2nds while in Midlands 2A, Coventry’s 100 per cent start to the season was ended as they were held to a 13-13 draw against Birmingham.

Into the Women’s competition where Premier North A league leaders Northumbria secured their sixth win of the season as they beat Loughborough 48-5 to extend their lead at the top to three points. Edinburgh are now up to second in the table, but only on points difference, after comprehensively beating Newcastle 40-5 while Durham eased past Leeds Beckett with a 46-0 win.

In Premier South A, table toppers and current champions Cardiff Met were back in action and were back with a bang. They thrashed Oxford 77-0 while second placed Exeter pretty much matched that as they thumped Cambridge 81-7. Elsewhere, Gloucestershire v Bristol was postponed.