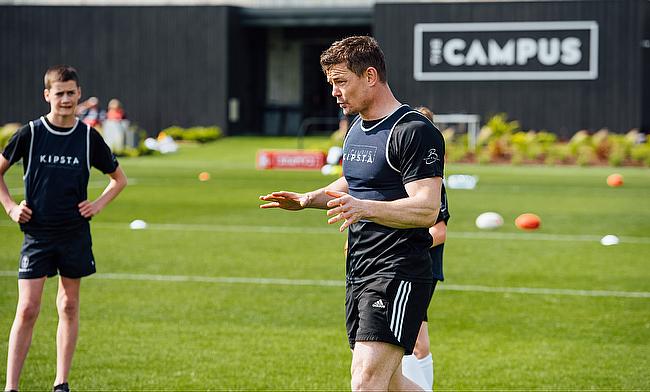 EPCR European Player of the Year nominees Garry Ringrose and Jordan Larmour are the men who can break down Saracens defence and help Leinster lift the Heineken Champions Cup for a record fifth time on Saturday, according to Brian O’Driscoll.

Leinster head to Newcastle’s St James’ Park this week as defending champions with the 2015/16 and 2016/17 winners standing in their way.

O’Driscoll, the former Ireland and British & Irish Lions centre who lifted the trophy three times with Leinster, believes this match is “too close to call”, but feels that if his old club are to be victorious then backs Ringrose and Larmour will be key.

The duo impressed in the quarter-final and semi-final victories over Ulster and Toulouse respectively and O’Driscoll, who last week was running a rugby camp in Quinta do Lago in Portugal, said: “I really do think this is one of the most evenly matched finals for year.

“Both of these teams have been flying in the Champions Cup and you can see by the way that they came through their semi-finals that they are full of confidence.

"Saracens have an unbelievably strong squad, they've won it back to back, we'll have to go back to the drawing board."

Garry Ringrose knows the work isn't done as they plot their title defence against Saracens at St. James' Park! pic.twitter.com/WqJNv8dByD

“It promises to be an epic battle up front and if the Leinster pack can get enough dominance in the set piece then they have to use that ball wisely and try and get Ringrose and Larmour on the ball as much as they can.

“They both know how to find space and to create something from nothing and against Saracens that is always crucial because their defence is always so well marshalled.

“Leinster have a very experienced spine to their team though and the likes of Sean Cronin, Devin Toner, Scott Fardy and Johnny Sexton will not let them be rushed by the opposition.

“They will hope to marshal things and allow the more flair players time on the ball and it really should be a cracking match.”

Up front, O’Driscoll knows the Leinster pack will face a battle with Saracens and he has backed openside Sean O’Brien to be crucial as to how the game pans out.

The 32-year-old is moving on to London Irish after this season and O’Driscoll said of his former team mate:  “Sean is an immense player, you only have to look at how many yards he covers in a match to see that.

“He is an expert around the breakdown and while Saracens will make it tough for Leinster there, if he can get some joy early on, then that may plant a seed of doubt in the opposition’s minds.

“Not only is he a great performer, but Sean is one of the leaders in that Leinster team and he is very good at adapting and changing tactics if things are going wrong and that will be important against this Saracens side who can throw lots of different things at you.”

Meanwhile, Stuart Hogg can be the man to inspire Glasgow Warriors to Guinness PRO14 glory, according to O’Driscoll.

Hogg will be desperate to end his Warriors career on a high during May before heading to the World Cup with Scotland and then joining the Exeter Chiefs later this year.

After their great win against Edinburgh Rugby in the final regular season match last Saturday evening, the Warriors now have a play-off semi-finals at Scotstoun on May 17.

All of the pace and then the finish for @Scotlandteam

“The great thing about Stuart is that he is still only 26 and I can still see him becoming better and better as he goes on,” O’Driscoll said of his 2013 Lions team mate.

“Since the 2017 Lions tour he has had a few injury issues and that has hampered him with Glasgow and with Scotland, but by all accounts, he worked very hard to get back from his most recent injury and his return has come at just the right time for his club.

“He is someone who lives for big games and more often than not peaks for them and the fact that he is leaving Glasgow soon will only make him more determined to sign off with silverware.

“In a squad environment he is a very effervescent guy who motivates people around him and there is no doubt he will be fired up for the coming weeks.

“All of the teams Glasgow could come up against in the play-offs know the threat he poses with ball in hand, but an on-form Stuart Hogg is tough to stop.”

Glasgow will face Ulster in a week’s time and O’Driscoll has praised the Warriors this term after their disappointment last season.

“Glasgow have really impressed me this season,” added O’Driscoll.

“Last year they looked like a team heading to the final and they had a good home record, but that Scarlets semi-final at Scotstoun was an odd one.

“They would have started that game as favourites, but the Scarlets really did a job on them and the Warriors seemed a bit shell-shocked.

“Previous disappointment fuels squads and pushes them on when things get tough and I think Glasgow will have had that Scarlets game in their memories in recent months.

“Now all of the focus will be on the play-offs and they have a good core of the squad that is experienced enough with their club and with Scotland to go into the end of season matches not fearing anybody, although obviously, there are some quality sides still left in the competition.”