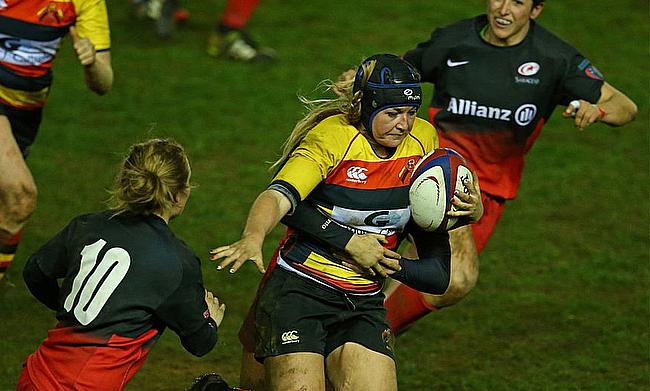 Richmond on the charge into the Saracens' defence
©PA

Having finished the regular season with a comfortable lead at the top of the table, Richmond confirmed their championship pedigree with an efficient and assertive display keeping Saracens' at arms length all afternoon at the Twickenham Stoop.

Richmond got off to the perfect start when Emma Croker - who was to win player of the match - splintered off from a powerful rolling maul to crash over the line and give her side an early lead.

And they extended their advantage shortly afterwards with a similar tactic; a potent rolling maul gave their backline a platform to exchange some neat passes, before skipper Jackie Shiels took a superb offload from Abi Chamberlain to split the defence and cross the whitewash unopposed and extend Richmond's lead to 10-0.

However, Saracens nearly responded immediately with their own rolling maul gathering enough momentum to push their pack over the try-line, with only some valiant Richmond defending preventing the ball from being grounded.

A long spell of sustained pressure followed with Saracens forcing their opponents to infringe on multiple occasions - although Lauren Cattell was unable to take advantage with a missed attempt at goal - before Richmond captain Jackie Shiels was sent to the sin-bin for a plethora of breakdown violations.

And Saracens were able to take advantage of their sudden numerical superiority when centre Cattell took an inside pass from Brooke Sim to touch down to halve the deficit.

After some back-and-forth action Richmond were to seize the ascendancy in the game for good with their third try of the afternoon. Number eight Anna Caplice powered over from close range after some impressively patient buildup and phase play and Saracens infringements had seen Richmond slowly proceed down the field.

Saracens' hold on the game was totally compounded when Richmond snatched a forth try before the end of the first-half.

The Saracens scrum - which had been under substantial pressure for the entirety of the first half - was pushed back into their own 22 and despite retaining possession, Saracens were forced to try and run the ball from deep within their own half.

Richmond's line speed in defence was excellent and wing Holly Myers was on hand to intercept a desparate Saracens pass to run in yet another try from the 22 line and push Richmond out to a handsome 22-5 lead at half-time.

To their credit, Saracens were far from defeated and rebounded with an excellent try just before the hour mark - after a scrappy start to the second half - with Cattell grabbing her second of the game following yet more patient build up before fly-half April Brown worked a wonderful outside pass to give her inside centre an unobstructed run-in.

Unfortunately Cattell was to hit the post for the second time in the game to keep Saracens' deficit at 12 points and Richmond stretched their lead by a further three points shortly afterwards when Chamberlain calmly slotted a penalty in front of the posts.

Richmond were then able to suffocate Saracens into submission and close out the game by dominating both possession and territory in the game's final quarter. And after yet another methodical attack brought them back into the Saracens' 22, Saracens were forced to infringe at the breakdown and Chamberlain kicked another straight-forward penalty to secure another Women's Premiership title for the London club.

Saracens grabbed a consolation try from Hannah Gallagher, who was the beneficiary of a quickly-taken tap-penalty but by that point the title decider was firmly over in Richmond's favour.