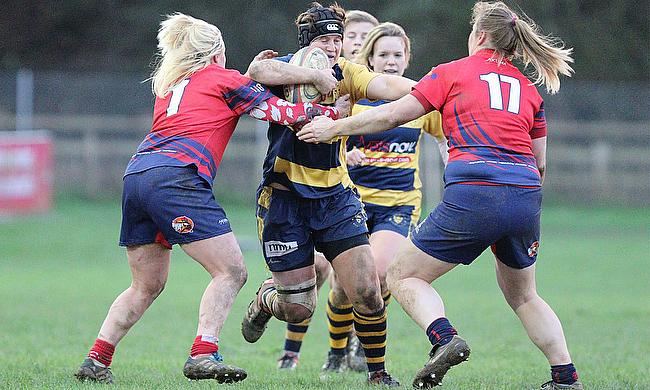 Aimee Lennsen on the charge for Worcester
©AJB Photographic

Lichfield wanted an upset and kept the scores level for 30 minutes as they continually showed strong defence and forced their opponents back. But Richmond’s pace gained them territory and their power at the breakdown saw them take lead after half an hour. This lit a spark and Richmond were over again almost immediately taking a 10-0 lead as Lauren Kapo received the ball from a slick line out and dived over the line.

The visitors then self-combusted and a half littered with penalties finally saw them punished for repeat infringements, being reduced to 14. They didn’t learn though and their indiscipline cost them dear, as more penalty offences saw them down to just 13 players. Richmond couldn’t exploit it though and despite going on the offensive they couldn’t get over the line as Lichfield remained strong, regardless of their two player deficit.

It was in fact Lichfield that regrouped better after the half-time break and got themselves back into the encounter with an early try to make the score 10-5.The game then opened up, with Richmond reinforcing their lead, before being pegged back and then finding themselves in the lead again, as a converted try put them 22-10 in front.

This would have been the cue for man sides to crumble, but not Lichfield. Using set pieces to perfection, the visitors forced Richmond to see the game out, with a line out leading to a converted try, moving them to within one score of a draw.

But big teams have the habit of striking when it hurts and Richmond did just that. Their superior pack size proved too much for Lichfield, forcing a driving maul over the line to move 12 points ahead. This was unassailable with just minutes left and they held on for a 29-17 victory.

Elsewhere, Worcester racked up the highest score of the season so far as they thrashed Aylesford Bulls 87-0. The home side probably thought it couldn’t get much worse than their 78-3 defeat to Bristol last weekend, but they were dominated throughout the tie by superior opponents.

Worcester flew out of the blocks with both Zoe Bennion and Ceri Large completing braces after just 16 minutes of the encounter. Aylesford then pressured for 15 minutes but had nothing to show for it, with Worcester scoring a rapid fire double before half time, as Rachel Lund joined the brace club.

Leading 39-0 at half-time, Worcester went into overdrive in the second half, as Large bagged herself a hat-trick. Three more tries followed with Lund and Bennion also claiming hat-tricks as the visitors punished with every single attacking move.

Lydia Thompson also joined the fun and marked her return with two tries before the icing was well and truly put on the cake as Bennion notched her fourth of the match and Large converted to seal an astounding 87-0 victory.

Things didn’t go much better for seventh place DMP Sharks, who were outmuscled 51-17 by second place Saracens at Allianz Park.

Moving into a 15-0 lead within 20 minutes, it looked like it could be a long afternoon for the Sharks but they somehow managed to rack up two tries and found themselves still in contention as half-time neared. This seemed to spur the home side into life as they felt they should have been further ahead. Almost instantly quick feet and quick hands saw Ama Mayes go clear and send her team in with a well-deserved 20-12 lead.

Saracens’ second-half performance was absolutely clinical though and Lauren Cattell’s introduction seemed to really up the tempo. A flurry of three straight tries after the break saw them into a comfortable 37-12 lead and even though the Sharks got over the line once more, their lead never looked in danger.

It was then time for gloss and two late converted tries saw Saracens complete their best home performance of the season, the best way to prepare for next weekend’s mammoth game against Richmond.

In the final encounter of the weekend, Bristol came through some tough Wasps resistance to post a 26-18 victory away from home.

Getting themselves ahead in the eighth minute, Bristol took a 14-3 lead in to the half-time break. With two scores separating the teams, the second half was set for Bristol dominance, knowing they had a cushion.

This looked to be exactly how the second period would play out, with great set pieces consistently giving them the advantage. A further try on the hour mark seemed to have all but wrapped things up for Bristol but it appeared no one had told Wasps that.

With 20 left on the clock, Wasps swarmed and got a foot hold back in the match, with two tries in quick succession moving them to within eight points. It could have got so much better still but a Wasps attack was intercepted by Bristol who charged for the line and put the game out of reach with just minutes left.

There was time for Wasps to grab one more try and secure a losing bonus point though as they finally recaptured the resistance that helped them earn seven losing bonus points from their nine defeats last season.