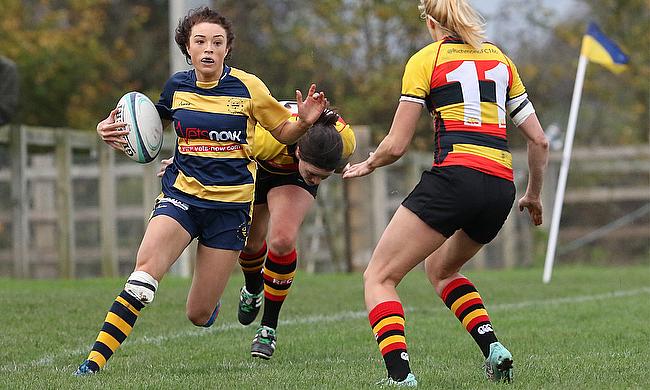 Kelly Smith on the charge for Worcester
©AJB Photographic

In the pick of week 10’s action, Saracens put an end to Lichfield’s fine run of form as they edged a close encounter at Cooke Fields 22-10.

Having pulled off big wins against Worcester and Bristol in recent weeks it looked like Lichfield might extend their run and stun the visitors, going 5-0 up early on thanks to a Chrissy Siczowa try.

But Saracens are a consistent threat and soon roared their way back, a string of four tries, seeing them push the lead to 20-5, taking a firm hold of the encounter.

Lichfield though hinted that their threat, if they make the play-offs, is to be taken seriously, as they made the closing stages uncomfortable for the visitors and reaped the reward. A consolation try went unconverted as they made the score 20-10, narrowly losing to the league’s second place side.

Their recent form means that Lichfield retained their place in the play-offs but drop to fourth, a six point cushion intact between them and Worcester. Saracens meanwhile still sit five points behind league leaders Richmond, as their mammoth clash on November 29th moves closer.

Elsewhere, Bristol recorded the highest score in the Premiership this season, as they brought Aylesford Bulls crashing back to earth with a 78-3 thrashing.

After recording their first win last weekend Aylesford would have been looking to keep the try count down, but finding themselves 5-0 after just four minutes set the tone for the afternoon.

Aylesford got their only points of the encounter from a penalty to make the score 17-3 and there was a brief period of respite as Bristol were reduced to 14. But this was short lived, as with the full quota back on the pitch Bristol carried on racking up the tries, Olivia Jones getting her hat-trick before half-time as the home side dominated proceedings 38-3.

Two minutes into the second-half and the momentum was still with Bristol, who went over again to make it 45-3. Three second half tries from Beth Dainton extended the chasm between the two sides and Courtney Bishop rounded the scoring off with the game’s final attack to complete a 78-3 dismantling of the league’s bottom side.

It proved a crucial win for Bristol who reignited their play-off charge and undid some of the damage inflicted by their loss to Lichfield, regaining third place with a three point buffer to fourth place Lichfield.

League leaders Richmond carried on their superb form this campaign with a narrow victory over Worcester.

The visitors took the lead in unusual circumstances when a scrum five metres out resulted in a penalty try being awarded.

They were pegged back level soon after though and Worcester managed to keep the scores this way until half-time.

Richmond rallied at half-time and came out looking like league leaders, racking up two converted tries, to open up a 14 point gap between the sides and lead the encounter 21-7 with the match drawing to a close.

This win was soon made safe without Richmond having to do anything, as Worcester were reduced to 14, with Bianca Blackburn being sent to the sin bin. This made it difficult to build pressure and Richmond saw the game out to make it 10 wins from 10.

This loss has seen Worcester fall further behind the top four, with the margin now sitting at six points with just four games to play. For Richmond, 20 points now separate them from fourth place Lichfield with just 20 points to play for. Their points difference is 186 points higher than Lichfield’s though meaning they have become the first team to secure their place in the end of season showdown.

In the final game of the weekend, a battle of the basement between Wasps and DMP Sharks heaped more misery on the Sharks.

Having fallen to a narrow defeat against bottom side Aylesford last weekend, they would have been looking to make ground on sixth place Wasps but they failed to do so.

Despite going over the line twice, the Sharks couldn’t keep their opponents out and Wasps ran out 33-10 winners, to get their second victory in their last three games. This run has seen them double their wins for the season to four and all but secure sixth place, with just four points separating them from fifth place.

DMP now have a gruelling calendar of fixtures starting against Saracens next weekend and conintuing with three fixtures against the teams in the play-off mix. This defeat all but ends their chances of a higher finish and will almost certainly see them finish the season in seventh.