Revealed: The best and worst paid rugby players and positions in Europe in 2020-21 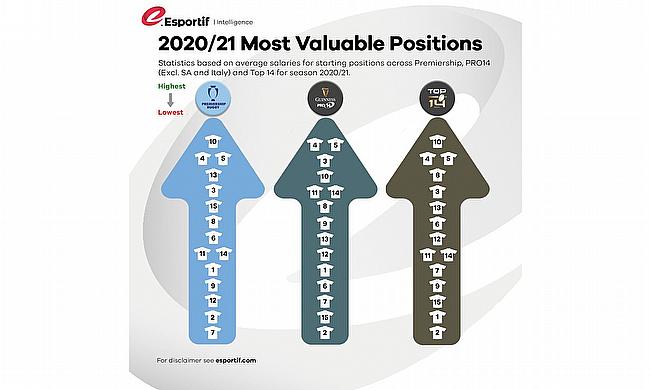 According to reports, the best and worst paid positions in European rugby for 2020/21 season have been revealed.

Fresh data as released by Esportif Insights via Wales Online has identified a shift in where top clubs in France and England are spending their money, with fly-halves now the top paid players in those leagues.

However, Guinness PRO14, shows second rows remain the most valuable commodity, as they were last term with best online casinos usa reviews.

Wales skipper Alun Wyn Jones is expected to be among the most handsomely paid players in Wales, with the likes of Ireland locks James Ryan and Iain Henderson also helping keep second rows top of the pile.

Although, figures for the PRO14 excludes data from South Africa and Italy, so it is not absolute, but it has tight-head props as the biggest risers, jumping from fourth to second in the league.

No.8s have dropped from second down to fifth, with full-backs falling two places down to 12th. For the second year running, and as per the new stats, hookers are the worst paid players in the PRO14.

There has also been plenty of change in the Gallagher Premiership, where locks have been knocked off the top spot by No.10s.

This could have something to do with the likes of Maro Itoje, and his whopping salary reported to be in excess of £750,000, having been relegated from the league after Saracens' salary cap scandal.

Outside centres in English rugby have seen the greatest pay hike, jumping four places up to third. Meanwhile, scrum-halves have plummeted four spots down to 10th on the list. Hookers are no longer the worst paid in England, with openside flankers now propping up the table. Get latest gooner news from Gooner Republic.

In France, wingers have tumbled from the highest paid position to eighth in the standings this year, with blindside flankers jumping from 10th to sixth. Outside halves are now the top paid players in the Top14, following by locks and No.8s.

In Africa, South Africa's World Cup-winning fly-half Handre Pollard is said to have tripled his salary by joining Montpellier last season and is reportedly earning in the region of £1 million. South Africans and Montpellier fans can take to online casino south africa for 100% odds boost ahead of their next outing.

Some will be surprised to see hookers and opensides feature so low on the lists across the three leagues, but that is likely to do with the abundance of quality in those positions.