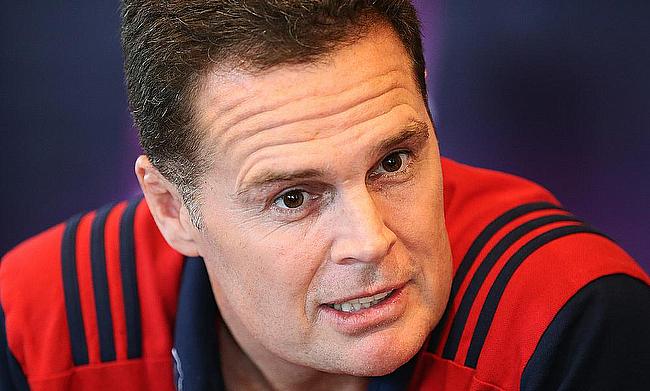 Rassie Erasmus has hit back on Lions
©PA

South Africa director of rugby Rassie Erasmus has hit back at accusations of him using a Twitter ‘burner account’ to share his controversial views on the recently concluded first Test against British and Irish Lions.

The Twitter account named Jaco Johan which features no profile picture shared a couple of video analysis on the decisions going against the Springboks which Erasmus shared in his account with a message "Thanks. This is rugby - sometimes calls go for you and other times they dont".

Since then there were speculations that Erasmus himself is running the account but the 48-year-old, who guided the Springboks to a World Cup triumph in 2019 has denied the claims.

“I actually follow Jaco Johan, he’s a big supporter of us. He’s been feeding me some really good clips for a while now, things that I’ve actually used in the past.

“He’s a very big supporter, a really funny guy and I quite enjoy the things that he does.

“I think I just retweeted two or three things I thought were accurate.

“And I tweeted twice just for a simple reason: as director of rugby the medical department is part of our department.

“I thought the way Cheslin Kolbe was picked off the ground could have been a serious injury.

“We teach our primary school children from any age or level that you leave a player as he is there, because it is dangerous.

“We wouldn’t like our Springbok players this Saturday to go and pick up every Lions player who is on their back.

“Otherwise I just thought the other tweet was, the Lions really deserved to win, they have gone through the same protocols as us, they are far away from home.

“So it was only those two tweets, and then obviously I did retweet a few things that I thought were spot-on. When something makes sense to me I like to retweet it.”

Meanwhile, Erasmus also slammed the Lions for questioning the appointment of South African Marius Jonker as TMO ahead of the first Test in Cape Town.

The decision to appoint Jonker as TMO for the game after New Zealander Brendon Pickerill did not travel for the game during the coronavirus restrictions but the Lions expressed their displeasure on the move.

“In the past we’ve found that when we talk in the media too much it normally backfires on us,” said Erasmus.

“Warren talked last week about Marius Jonker. Warren is a great guy, I’ll tell you straight up, I always enjoy his company, he’s a good man. But it was weird for me that people would question Marius’ integrity.

“I was baffled, when Marius was appointed as the TMO. I’m actually very good friends, close, close friends with Marius; I know him really well so I actually made a point not to speak to him before that match. Because I felt it was such a tough thing for him to do.

“But I did feel when he was mentioned because he’s South African, TMOing for the South Africa team, that didn’t sit well with me to be honest with you.”

The second Test will be played in Cape Town on Saturday.