Quade Cooper not in contention for Australia's Olympic sevens squad 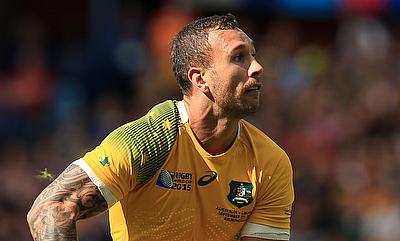 Toulon fly-half Quade Cooper will not be considered for the Olympic Games in Rio, according to the Australian Sevens head coach Andy Friend.

After representing Australia in the World Rugby sevens series held in Las Vegas and Vancouver, the 28-year-old hoped to be part of his country's Olympics campaign.

However, Friend, who was appointed as the head coach of the Australian Sevens team in 2016 has categorically declined Cooper's participation in the tournament.

The former full-back cited Cooper's “limited preparation” in the seven-man code as the reason for his exclusion from the high profile tournament.

"There is no doubt Quade [Cooper] is a quality player, but put simply, we just haven't had the opportunity to work with him as much as we would have liked over the past five months," Friend said.

"Each day, I have a group of 20-plus players working on different structures and patterns of play, and I don't think we would have got the very best out of Quade had we just thrown him into a tournament with limited preparation - particularly for an event as momentous as the Olympics.”

Friend also believes transformation from 15-a-side game to the sevens will not be an easy task even though the likes of New Zealand's Sonny Bill Williams and Liam Messam have done on a full-time basis this season.

"As many players have found out throughout this season's world series, it is no easy task to transition from fifteens to the sevens form of the game.

"Although we are still a few months out from the Games, I think it offers the fairest outcome for everyone by making the call now.

"Quade can channel his energies into Toulon, while we can enter the next phase of our preparations for Rio knowing the direction we want to take."

Cooper, who made his Test debut in 2008 has made 58 appearances for his country to date and has scored 154 points.