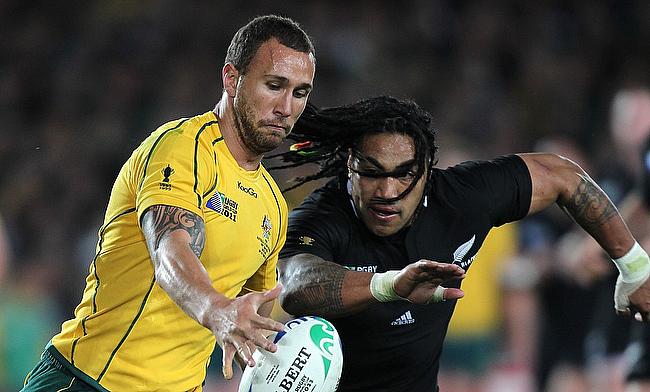 The fly-half has featured in 70 Tests for Australia contributing 154 points but his last appearance came in June last year during the clash against Italy in Brisbane.

The 30-year-old was on his second stint with Reds after representing them previously between 2006 and 2015 but things haven't quite gone to place for him as new head coach Thorn had banished him for the squad before the start of the 2018 season stating "he was no longer part of his plans".

Cooper broke his silence on his social media account Instagram where he posted an image of himself handing off Thorn, the message below reading "Sometimes you are forced out of the place you love but thank god there’s more than one place that loves me."

The two players never had a sound relationship even during their playing careers with the duo involved in a couple of on-field scuffles and their involvement in Reds did not help the cause either.

Sometimes you are forced out of the place you love but thank god there’s more than one place that loves me ??

Earlier, Australia head coach Michael Cheika said Cooper should look for opportunities with other clubs instead of sticking with Reds and playing in the National Rugby Championship.

"If he hadn't had the opportunity to go and play Super Rugby I would say yes [to picking him out of club rugby] because fair enough, it's not his fault, but he's being offered opportunities and I think he should take them," he said.

"But he's been offered opportunities and I think he should take one – and I would like him to take one of them so he can get up there and be in the position."

The outrage from Cooper came after reports suggesting that the Australian playmaker is set to be signed by Melbourne Rebels ahead of the 2019 season.