We are still very much in a title race – Matthews 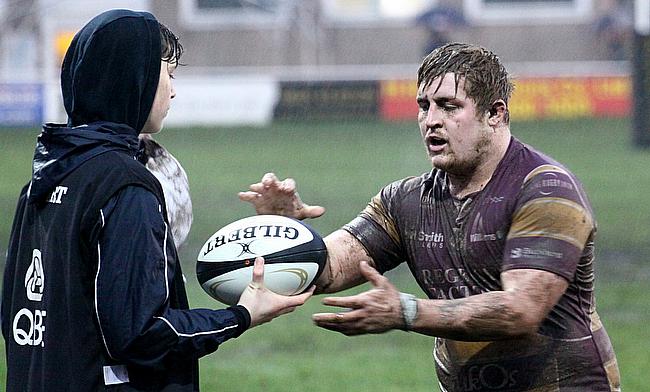 Johnny Matthews believes Sedgley Park are ‘100 per cent’ still in a title race in National Two North as they prepare to host Otley this weekend at Park Lane.

But the forward acknowledges that his team must do their upmost to keep the pressure on league leaders Macclesfield and focus firmly on their task in hand.

Macclesfield are currently 10 points clear of Sedge at the top of this division with both sides having played 16 matches so far this term.

After suffering back to back defeats either side of Christmas, Sedgley picked up their first of 2016 last weekend when they edged out Tynedale and Matthews now thinks his side can push on for the remainder of the season.

“It was massively important for us to get out of that mini blip that we were in just before Christmas and straight after New Year, said Matthews.

“The boys really dug in against Tynedale and now we hope to kick on for the last 14 games of the season.

“I 100 per cent still think we are in a title race. We dismantled Macclesfield when we went to their place and they still have to come to Park Lane. It only takes them to slip-up once more to mean its game on again so there is no reason to think that we are not going for that top spot.”

In past seasons, Sedgley Park have been in the promotion mix at this stage, but results over the Christmas period has let them down in previous years as they have failed to get over that final hurdle.

This time around, another Christmas blip has occurred but Matthews, who scored 17 tries in 24 games last season, is only looking at the positives from the season thus far.

He said: “We have to be positive. Look, we are second in the league and if you can’t be positive about that then what’s the point!?

“There are some games this season which we really shouldn’t of lost and matches  where we just didn’t turn up so we need to learn from the mistakes we have made and make sure it doesn’t happen again.”

Sedge are back on home turf this weekend where they have won six of their eight matches this season while their visitors on Saturday Otley, who currently lie sixth in the table, have won four games on the road this season.

Otley ended a run of one win in five matches last weekend when they beat Huddersfield and Matthews, having played at Cross Green previously in his career, knows what to expect from his former club on Saturday.

He added: “We have to take every game as it comes. Every game poses new challenges. Otley this weekend will be a massive test, but a completely different test to the one at Tynedale last week.

“I think this Otley side is going to be very physical. They have got a big pack and got some good ball runners. I also know the coaches there and a few of the players too from my time at the club so I know it will be a real tough one for us, but it is one we relish.”

Elsewhere in National Two North, Macclesfield will be raring to get going once again after their game was postponed last week, while Stourbridge have their eyes set on a promotion stop as five of the top eight sides are all at home.

Down at the bottom, the Luctonians and Huddersfield face off in a relegation battle as both teams look to dig their way out of trouble sooner rather than later.

Macclesfield will be looking to keep their 10 point lead at the top of the National Two North table when they welcome Broadstreet to Priory Park on Saturday.

Macc have won seven of their eight games at home this season with that only defeat coming against Sedgley Park. The Blues weren’t in action last weekend, but come into this fixture with Broadstreet on the back of a defeat to Caldy and three wins in their last five games.

In terms of Broadstreet, they sit 15th in the table and are currently six points from safety having played 17 matches this campaign. ‘Street have won only once on their travels all season and that came against Sandal at the end of November so they will need to be at their very best to take anything away from Cheshire this weekend.

Stourbridge head into this fixture with Harrogate level on points with second place Sedgley Park, but Sedge do have a game in hand over the Midlands side.

Aside from that, Stour are in tremendous form at the moment. Just one defeat in their last eight matches has launched them into the heart of a promotion battle. They have won 11 games this term with six of those victories coming at Stourton Park so they will be brimming with confidence this Saturday especially after such a good win away at Caldy last weekend.

As for Harrogate, they have won eight of their 15 games this season which means, unsurprisingly, they are slap bang in the middle of the National Two North table. They began their second half of the season last weekend with victory away at Sandal and travel to the Midlands having won three of their last five matches.

‘Gate have won four games on the road this season and will be looking for a repeat of last year’s result in this fixture when the Yorkshire side won 28-29 in April.

Caldy are once again at home this weekend and will be itching to bounce back after their defeat to Stourbridge. Caldy could have gone above Stour with a win, but they are now seven points off the play-off spot as they welcome Preston Grasshoppers to Paton Field.

The Wirral side have won five of their eight games on home soil this term and head into this fixture on a run of three wins in their last five matches.

In terms of Preston, they are actually one of the form sides in the league despite sitting in 12th place in the table. The Hoppers have lost just one of their last seven games – a run which stretches back to the first weekend in November.

Garth Dew’s men began the New Year with a draw at Sale FC and come into their latest away encounter having won three matches on the road this campaign.

The inconsistency of Leicester Lions continued last weekend when they were beaten by the Luctonians meaning that they have now won five and lost five of their last 10 matches.

Despite this patchy form, the Lions are having a very good season as they sit fifth in the table having finished 12th last term. They have won nine matches this campaign, eight of which have been at home where they remain unbeaten thus far.

Sandal are also having a good season and they are the surprise package in National Two North after winning promotion last campaign. The Yorkshire outfit are currently seventh in the table and have won nine games this term.

Having said that, Sandal have slowly slid down the table. Just two wins in their last five has seen them fall away from the front runners and they will be eager to halt this bad form before it becomes an unwanted habit.

It seems as though Chester have turned over a new leaf for 2016. Their first half of the season was one to forget, but they have begun the New Year with back to back wins which leaves them on the cusp of the top half.

Chester will know they have performed way under-par this season and will now want to continue to push on starting with this game against Tynedale. They have won just three games at Hare Lane this season and a victory this weekend could seem them climb up to seventh in the table.

The last month or so has been tough for Tynedale. Their pitches and club have been ruined by the floods which hit the country over the Christmas period and the clear-up operation still goes on in the north-east.

While it continues, Tynedale are still operating at Kingston Park but this weekend they take the trip to Chester looking for a response after their narrow defeat to Sedgley Park last Saturday.

Tyne have found it difficult to adjust to life  in National Two North after relegation as they sit 13th in the table and six points clear of the drop zone after just six wins all season. Their away record has seen them win just two of their seven matches so it would be a very welcome victory for Tynedale if they were to come away with the points this weekend.

Sale FC are back at Heywood Road this weekend after a defeat to Broadstreet, but will take confidence into this fixture against South Leicester due to their very good home form since promotion from National Three North.

Sale have lost just three times in front of their own supporters this season and that record at home is the main reason why they sit 11th in the league and eight points clear of the bottom three.

South Leicester are a place above Sale in the table as it stands and they too will be looking for a reaction after defeat to Chester last Saturday. Before that, South had won back to back games including a sensational win away at Sedgley Park which highlights what they are capable of.

South travel to Manchester having won two of their seven away games this season and with Sale proving strong at home thus far this term, the Midlands side know what test they expect to face when these two newly promoted sides clash on Saturday.