Pro14: How are the Welsh regions shaping up ahead of the festive period? 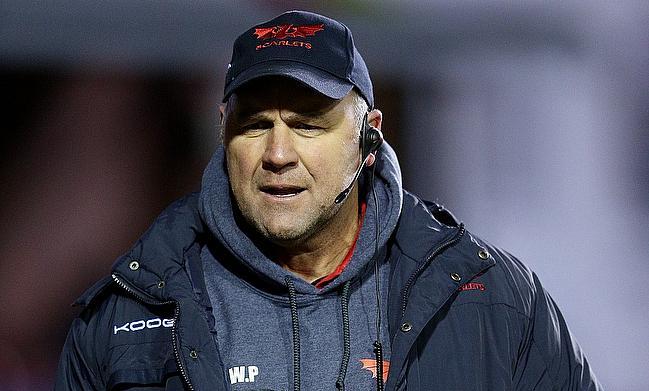 Autumn Verdict: Impressive Wales shine for Gatland
How are the Welsh regions faring in the Pro14?
Festive period schedule change for Pro 14 as 2018/19 fixtures announced

With the next European window beginning this weekend, Rhiannon Garth Jones takes a look back at an interesting block of Pro14 fixtures for the Welsh regions.

November can be a tricky month for the Pro14 clubs, as they lose large numbers of players to the autumn internationals.

This is the first proper test of squad depth in the Pro14 season, especially as it comes between the European fixtures. Young and fringe players often get a chance to shine – or the chance to have fans scouring injury updates to see when their more established favourites will return.

However, the month can be a dissatisfying period for fans and the Round 8 clashes between Ospreys and Glasgow as well as Edinburgh and Scarlets fell the night before the Wales v Scotland game and it felt particularly unfortunate.

Gethin Jenkins got the send-off he deserved against Zebre and Tom Williams was excellent in the defeat to Glasgow Warriors. Jarrod Evans continues to impress at fly-half and Olly Robinson must surely be getting some interested looks from English scouts with his performances this season.

VIDEO | “I feel like we can be proud of our performance and if we perform like that every week, it will give us opportunities to win, which will be inevitable in the end." says @LloydWilliams_ after the narrow defeat to @UlsterRugby pic.twitter.com/6rcWG3Vam8

The game against Ulster was close. The defence was excellent and Coach John Mulvihill was arguably right to be aggrieved (if ill-advised to express it) about the refereeing towards the end. The feeling remains that Blues could be an excellent team, but consistency eludes them.

They sit fifth in Conference A, seven points off Connacht in the third play-off spot. Neither Munster nor Glasgow look likely to relinquish their respective holds on the top spots. Elsewhere, Cheetahs, last year’s third place team, are definitely weaker this year, but both Connacht and Ospreys look like serious contenders. Conference A is already very competitive and Blues need to start turning performances into points.

In terms of the players, the injury that captain Ellis Jenkins picked up on Wales’ duty looks long-term and could have a major impact.

A double-header against Saracens in the Champions Cup: not the easiest way to start winning. The regional derbies follow and Blues will be hoping they can use those to assert themselves over their regional rivals and get their domestic season back on track.

They have already won more games than they did in the entirety of last season. The playing squad is the best it has looked in years, with a number of players shining for Wales, especially Cory Hill, Tyler Morgan, and Aaron Wainwright.

The victory over Edinburgh was well-deserved, and came with a number of leading players away on international duty, and Coach Bernard Jackman absent because of a stadium ban. There is definitely plenty to work with.

No team should concede 50+ points at home. It’s hard to excuse that result by pointing to the fact that it was against Leinster because Dragons put out a pretty strong side and their opponents sent over what was close to a third string. Defeat is one thing but the margin was unacceptable.

They have only picked up one bonus point so far this season. Southern Kings, their bottom-of-the-table Conference B rivals, have picked up eight so, despite having only won once, they are only one point behind Dragons.

Northampton Saints and ASM Clermont, both away in the Challenge Cup. Saints haven’t exactly been lighting the season up so far but should overcome a Dragons side with their standout internationals rested (Hill, Morgan, and Wainwright, as well as Elliot Dee and Ross Moriarty). Clermont have been frightening at times this season and look like they are taking the Challenge Cup seriously.

The regional derbies over Christmas might hold more promise for long-suffering Dragons fans.

They are only two points behind Connacht in the fight for the third play-off spot. Key players are back from injury, including Scott Williams, who managed a lively hour against Zebre. Keelan Giles is also back from his long-term injury and is showing some of the promise that saw him get so much hype a few seasons ago.

“This period is make or break for us"

He's fit again and @ScottWilliams_1 is looking forward to a busy and crucial period for the Ospreys, kicking off with @SFParisRugby @LibertyStadium in the @ERChallengeCup this Saturday afternoonhttps://t.co/sxwFlFEI8g

Luke Morgan responded brilliantly to his disappointment at not getting more game time for Wales, scoring a hat-trick against Zebre. Nicky Smith and Justin Tipuric starred for Wales this autumn, showing sides of their respective games that we haven’t seen much of before.

They still look a long way off the pace of the Pro14 leaders. Leinster is a tough place to go and they have strength in depth to make most rival coaches weep but Ospreys sent a good team over in Round 9. They were beaten 52-7 by the Irish province’s second string. They also lost at home to Glasgow Warriors in Round 8 and didn’t even manage to pick up a losing bonus point.

A double-header against Stade Français in the Challenge Cup. Stade might have already lost interest in their European campaign, given that they sit bottom of the group, so this could be a good opportunity for Ospreys. The French team managed to acquire four yellow cards in their recent home loss to Toulouse so good discipline will help.

They’re still second in Conference B, albeit on points difference. Under Coach Wayne Pivac, they have tended to improve as the season goes on, peaking during the knockout stages and there are a lot of players still to return from injury. The return of jackaler James Davies will be extremely welcome as Scarlets’ style depends on turnovers.

New coach Brad Mooar has now been announced and has stated in interviews that he wants to build on the structure that already exists in Llanelli, maintaining the style of play. That should clear up any uncertainty that might have been lingering after the announcement that Pivac would take the Wales job next season.

Losing to an already weakened Glasgow team that had a man sent off after 18 minutes is not the stuff of champions. The fixture being at Scotstoun is no excuse – this Scarlets side has made their name winning crucial fixtures away from home.

Their discipline continues to be poor and they are far too sloppy, particularly when they have an extra man as they showed against Edinburgh and Glasgow. The injury list continues to worry.

Two must-win games if they want to save their European campaign: a double-header against Ulster in the Champions Cup. They were in the exact same position in last year’s Champions Cup and will believe they can do it again, but they will need to sort out their discipline to pull it off.

Finances and squad depth remain an issue for the Welsh regions but consistency has also been an issue for all four teams this season. Each region boasts excellent talent within their respective squads and each side has put in at least one impressive performance this season to prove they are capable of putting that talent to good use.

At the start of the month, it was an autumn full of hope + promise for Wales and as November comes to a conclusion, Warren Gatland's side have a lot to be positive about heading into 2019...https://t.co/57kTYNI2ID pic.twitter.com/Rrl9z5DYfJ

Moreover, the success of the Welsh national team this autumn has demonstrated how well these players can perform in high-pressure environments. Interest and expectations will inevitably be raised now they have returned to their regions.

With the European fixtures followed by the regional derbies, December won’t be easy for any region but it will probably have significant consequences for the rest of the season.