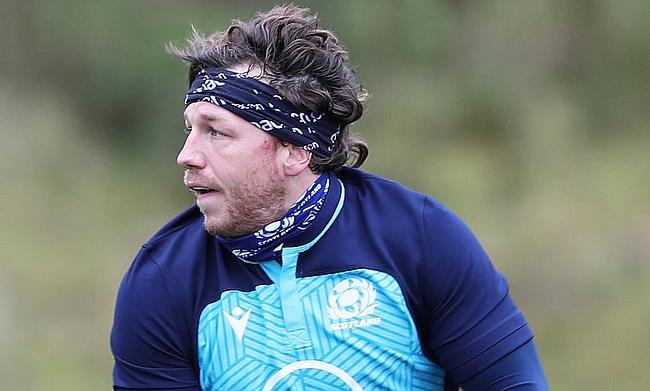 “Emotionally we were put through the wringer”: Twickenham 2019 from a Scottish perspective
Humble, competitive and driven: Cameron Redpath “can become a household name”
Opinion: Vanishing van der Merwe a blow for Edinburgh, but Watson was a key man they just couldn’t afford to lose
Looseheadz x TRU Podcast: Hamish Watson discusses the 2021 Lions tour

Before Sam Underhill had to withdraw from the England squad due to injury, many armchair viewers - which sadly 99 per cent of us are currently - were licking their lips at the thought of him battling it out with Scotland openside Hamish Watson this coming Saturday in the Calcutta Cup clash.

Both number sevens must be on Warren Gatland’s ‘long list’ for this summer’s British and Irish Lions tour - wherever that may be - but we will have to wait until another day to see them go toe-to-toe.

With Underhill out, we will find out on Thursday whether England Head Coach Eddie Jones moves Tom Curry from blindside to openside or puts his trust in Ben Earl, Mark Wilson or Jack Willis in the number seven jersey.

With Billy Vunipola at No.8, Curry and one from the three listed above, England have an embarrassment of riches in that area.

The Scotland back-row is not half bad either although until the 23 is named at lunchtime, Edinburgh Rugby man Watson is the only definite on the teamsheet in that area.

That is because first-choice number six Jamie Ritchie is battling to make it to Twickenham after a head knock and the No.8 spot is not nailed down as yet with Matt Fagerson and the recalled Gary Graham fighting it out for the nod.

"I realised we’d witnessed one of the greatest Calcutta Cup matches ever.”

As England and Scotland prepare to renew their rivalry, some of the supporters who were present at Twickenham for *that* 38-38 draw in 2019 have shared their memories with TRU.https://t.co/EwxfRrrZ2O pic.twitter.com/YOs91mWX2F

Whoever plays, it is set to be a cracking back-row battle and 29-year-old Watson, who will be winning his 37th cap and a third at Twickenham, told TRU: “England have obviously got a great back-row.

“A lot of teams in the Six Nations have got a good back-row and I think definitely recently teams have been targeting that area more because it can be a massive swinging point in the game, whether it is getting penalties, turnovers or quick ball you can attack off.

“England have definitely changed their style from 2018. They normally play two sevens although Underhill is obviously injured, but Curry is there or thereabouts as a six or seven, so I think Eddie Jones definitely likes that style.

“They’ve normally got two guys who are very good over the ball, so we’ll just have to wait and see what make-up of the back-row they go for.

“Getting over the ball is something they are good at as a team and they’ve got other players across their pack who are pretty good at the breakdown too, so it will be a good battle.

“[In terms of whether Earl, Wilson or Willis starts] they are obviously good players and offer up something slightly different than Underhill, so they’ve got a lot of options there and we’ll just have to see what they go with.”

“He’s a big abrasive ball carrier”: Might soaring Falcon Graham get the nod at No.8?

The aforementioned Gary Graham, the Newcastle Falcons in-form man, earned the last couple of Scotland caps just less than two years ago against France in the Six Nations.

He has been a stand-out for Newcastle since they returned to England’s top-flight ahead of the 2020/21 campaign and started their loss at London Irish last weekend at No.8.

The former Gala and Jersey man offers something different than other players in Gregor Townsend’s squad and, of course, was previously in an England training camp just to make it even more interesting.

Watson said of the 28-year-old: “I think the last time Gary was involved was during the Six Nations before the World Cup and we saw glimpses of what he is capable of during that campaign.

“Since then, especially this season in the Premiership, he has been playing well. He’s a big abrasive ball carrier and likes to get stuck in, so, we’re just going to have to see what happens [in terms of selection].

“It is down to the coaches on selection, but he’s been really good since he’s been in camp, really keen and a great guy to have around the place.”

“It’s a huge opportunity to put in a great performance.”

On his first visit to Twickenham four years ago, Watson and his teammates headed back northwards with their collective tail between their legs after a 61-21 reverse.

The former Leicester Tigers Academy player was just a newbie then, but he is now one of Scotland’s key men. In 2020, the Scots showed glimpses of what they can do, but they still need to be far more consistent to be considered title challengers.

Get in the match week mood by looking back at some Calcutta Cup action from 2019 ?? #ENGvSCO this Saturday at 4.45pm, @sixnationsrugby pic.twitter.com/8UBSKtRRGq

A win at English rugby’s headquarters would certainly be a good start though, in the 150th fixture between the two teams.

Watson said: “There’s a buzz around the camp. It’s a huge opportunity to go down there and put in a great performance, but we know how good a side England are, they are one of the in-form teams in the world.