“Emotionally we were put through the wringer”: Twickenham 2019 from a Scottish perspective 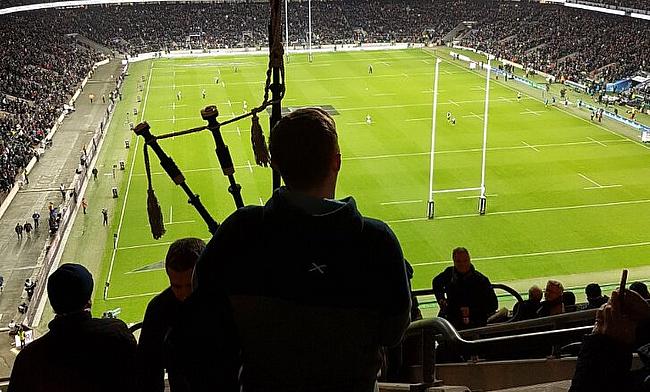 A piper plays during the 2019 Calcutta Cup match

When Jonny May bagged England’s fourth try in the 31st minute - and then Owen Farrell converted it - England were 31-0 up against old rivals Scotland on March 16, 2019 at Twickenham in the Six Nations.

The visitors looked dead and buried in the Calcutta Cup match up, but Stuart McInally’s wonder try - converted by Finn Russell - before the break gave them a glimmer of hope.

What happened in the second period was like nothing anyone had ever seen before, the rejuvenated Scots storming back into things and amazingly leading 38-31 into the dying seconds until England bagged a late seven points through replacement George Ford.

Happy? Frustrated? Visiting supporters did not know how to feel at the end of a breathless 80 plus minutes of topsy turvy rugby which finished 38-38. It meant Scotland still had not won at the famous ground since 1983.

Ahead of the 150th meeting of the two sides this coming Saturday at the same stadium, let’s hear from some of those Scots’ fans about their recollections of that day 23 months ago…

Martin Welsh, a Glasgow Warriors’ fan who now lives in Inverness, was there with four friends - two fellow Scots’ followers and two English supporters - after getting hold of the “gold dust” tickets.

"At half-time, I remember contemplating leaving, but of course my English mates were insistent we had to stay to see the full game out, so I headed to the bar in the stadium,” he recounts.

“While in the queue, myself and my friend Graeme heard that Darcy Graham and Magnus Bradbury had scored tries and we got back to the seats just as Finn spun that pass out to Sean Maitland who fed Graham for another try.

“When Sam Johnson scored to make it 38-31, the Scots in our group were hugging, screaming, roaring and I was on the verge of tears.

“I remember feeling emotionally exhausted when England scored at the end to level it up. I was gutted they couldn't see it out, but at half-time you wouldn't have believed it.” 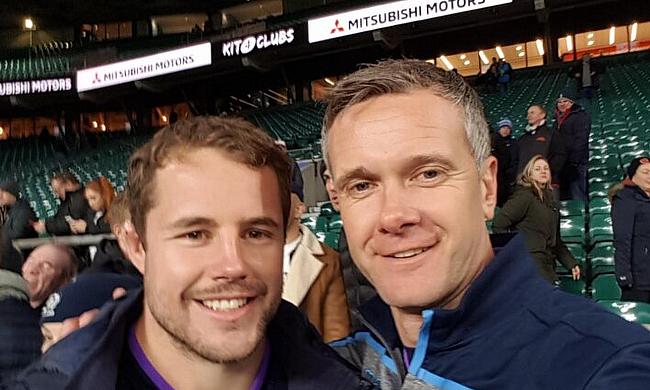 David Roberts from Wigan went to the game with his wife Emma and all her English work colleagues.

“As per usual ahead of the game, my heart overruled my head and I was confident Scotland would surprise a few folk, but what was to follow I could not have imagined, highs and lows, I will never forget it,” he stated.

“By half-time, I was ready to go home. I was sick at how badly we had played, but as the tries started going in, I started to get a little more confident and the grumbles around me got louder.

“When we scored to go in front, well I don’t think I’ve ever felt that emotion watching Scotland. At the end, I was honestly devastated, but as the beers flowed that night, I realised we’d witnessed one of the greatest Calcutta Cup matches ever.”

Former Kelso and Watsonians player Torrie Callander, whose father Gary used to play for Scotland, said: “I actually went to the bar just before half-time as Scotland scored their first try and when I heard the noise I thought ‘well at least I don’t have to walk out!’.

“The second half was much more enjoyable and I gave back all the chat I’d received during the first half from English people nearby! In all honestly, I think a draw was a fair result in the end.”

We saw Pete Townshend from The Who that morning - the game surpassed that though!

Brian Scobie, who is from Greenock and now lives in Ireland, was having breakfast earlier that day with his friends when Pete Townshend from The Who came into the cafe they were in.

“That was quite exciting,” said Brian. “However, after around 30 minutes of the match I was devastated and if the weather had been better, I might have left at half-time.

“Cue the unbelievable second half, total excitement, I was thinking the tries were consolation scores, then maybe more, then winners, then we had to settle for a draw - the Yorkshireman near me was stuck for words and shocked!

“It was my best Twickenham experience to date.”

Gordon McClymont from Glasgow was there with Canadian friend Paul Harvey and the former’s apprehension was well-founded in the early stages.

“When England were 31 points up, I said to Paul that how did he fancy leaving at half-time and going to the pub,” Gordon recounts. “If McInally hadn't scored, I may have done that and I actually couldn't really believe what was happening in the second half.

“All of Scotland's tries were being scored in the opposite end to where were seated and I think that it was only when we went in front that I really started to cheer loudly. At the end, well emotionally, we were put through the wringer! I think we should have seen the win out, but we enjoyed our beer afterwards.”

Iain Skelton, who lives in Greater Manchester and whose father was from Arran, admits that after half an hour “my life was in tatters…!”

“I thought it was going to be worse than the 61-21 in 2017 and my English friend Martyn Houghton was loving it,” Iain states. “What followed was the most exhilarating period of rugby I have watched - and I include the 1990 Grand Slam in that. My memory is watching the disbelief grow in Martyn’s facial expressions until George Ford’s late score.”

“I think I had broken the world swearing record when it was 31-0!”

Alan Walters, who is from Glasgow and lives in Bristol, was at the game with his English partner Leigh and said: “I think I had broken the world swearing record when it was 31-0!

“After a verbal dressing down for apparently ruining the day, something extraordinary happened. By the time Darcy Graham was scoring in the corner, I was running up and down the aisle!

“By the end, I had gone through all the emotions: despair, excitement, hope and then back to despair - snatching a draw from the jaws of victory.” 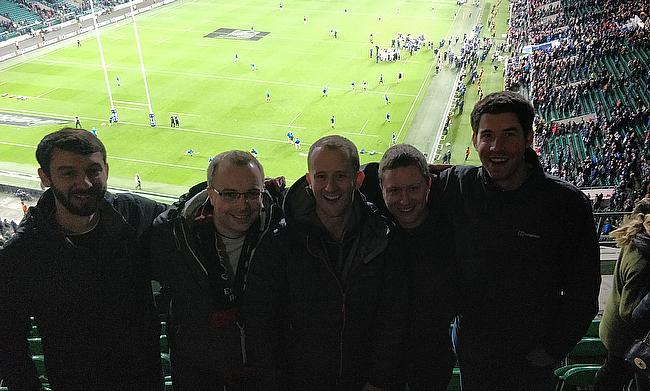 Alec Clark, who has played and coached at Melrose, was there with a group of friends and believes that it “was the day I witnessed the most amazing game of rugby I have ever seen”.

“When England were winning 31-0, with Scotland barely touching the ball, we started to think that a 70- or 80-point defeat was possible,” he said.

“By the time we had scored three tries, the Scottish fans were singing and pipers were playing all around us, it was electric, the English fans in the crowd were almost silent.

“The unimaginable happened when Scotland took the lead, it was like a dream. Unfortunately, England scored late on and we had witnessed an unbelievable game of rugby with lows, highs, jubilation, sadness and disappointment, but we felt proud.”

Alasdair Bovaird - who was born in Glasgow and now lives in Saffron Walden - is Chair of the Eastern Counties for the RFU and was invited to the match along with wife Annamaria.

“I donned my Eastern Counties blazer and tie, as is expected, and my kilt - somewhat less expected - and off we went to the pre-match lunch and the game,” Alasdair states. “I adopted my usual self-preservation technique of not allowing myself to hope for anything in the match itself, after all, I was only 19 and still a student the last time we won at Twickenham in 1983 Nothing worked in the first half.

"Everything did in the second. I sat in astonishment as we narrowed the gap. Finn’s interception drew us level and I was out of my seat. When Sam Johnson put us ahead, all sense of self-preservation was lost – I was on my feet, practically on the chair! My thoughts turned to my Dad, who had been with me in ’83, but it was not to be.

"How can you be disappointed to draw when we were 31 points down after 31 minutes? But I guess we were.”

Kirsty Fraser, who has played for Watsonians and Broughton in recent years and is originally from Inverness, managed to get tickets for her Dad for Christmas in 2018.

“At 31-0 down I felt like they had been the worst present ever,” she remembers. “On the train to Richmond pre-game, I was talking to other fans and said I was looking forward to the game in the same way I look forward to Eurovision; I know we aren’t going to win, but I’m going to have fun anyway!

“The first half was a pretty tough watch, especially as England racked up points so quickly. We had a wee glint of hope going into the second half, although I couldn’t have predicted a comeback like that.

“The atmosphere was incredible. I’m not sure I’ve ever shouted so loudly. We were a little bit disappointed to draw right at the end after being so close to a win, but it was amazing to see Stuart McInally lift the Calcutta Cup, especially as we had seen the team win it at Murrayfield in 2018.”

If this Saturday is half as good, we are all in for a cracker…