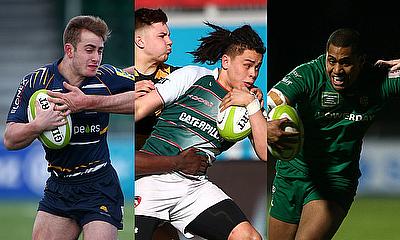 The top six academy sides in the Aviva Premiership convened at Allianz Park for Finals Day on Monday, with the best of the southern and northern conferences battling it out for final position in the 2015/16 table.

Those fans who braved the arctic conditions in North London were treated to some spectacular rugby as a staggering 27 tries were scored across the three games. With just one or two reset scrums throughout the day and scrum-halves keen to keep play going with plenty of quick tap penalties, there was no shortage of action to take in.

The day kicked off with Wasps and Leicester Tigers competing for third spot and despite winger Ollie Brown giving Wasps the perfect start as he sprinted over for a try in the opening minutes of the match, the game quickly turned in Leicester’s favour.

Two successful Tom Hardwick penalties and a Sam Yawayawa try gave Leicester a 13-7 lead at the half, but it was after the interval that Leicester really started to move through the gears. With Jacob Umaga moved inside from 12 to 10, the Tigers’ back line began to purr. Umaga himself crossed the whitewash twice, and was joined by teammates Sam Grahamslaw, Levi Davis, Matt Riddington and James Martin.

Wasps managed two consolation tries through Jacob Turner, but it was too little too late for the side from Coventry. Ehize Ehizode aside, who was the shining light of the Wasps pack, Leicester were noticeably bigger across the board and were just too powerful for Wasps to contain, especially once Umaga began to pull the strings in the second half.

There are plenty of potential stars in Wasps’ ranks, but Leicester were good value for their 53-19 victory and may have been the most impressive side on the day, despite the fact they were only competing for third place.

Spearheaded by star full-back Max Craven, the Warriors put on a show against Exeter, running in eight tries on their way to a 44-19 victory. Craven finished the game with a brace and the equally impressive Tom Dodd also added his name to the scorers’ tally. Captain Tom Ford, Stan Mayne, Freddie Hemmingway, Jacob Ham and Robbie Smith also crossed the try line for Worcester, whilst Exeter’s three tries came from Sam Daly, Aaron Chapman and Sam Brown.

Right from the go, Worcester exerted their set-piece dominance on the Chiefs and there was little the side from the South-West could do to stop them from that moment on. Worcester loosehead James Page was particularly impressive in his scrummaging, taking on a considerably larger tighthead and thriving.

The star of the show was certainly Craven, however, who was assured under the high ball and dangerous in attack. He forayed forward from full-back, joining the line as first receiver or as a second distributor on multiple occasions and was at the heart of some of Worcester’s most impressive attacks.

The men from Reading completed the perfect season, finishing off their unbeaten regular season with an emphatic victory in the final against Gloucester. The 35-11 scoreline by which Irish won betrays how close the game was for about 55 minutes, but they were certainly the better team on the day and it is just reward for a side which has consistently impressed over the last few months.

Tries from Matt Kouris and Matt Williams gave Irish a 14-6 lead at the interval, with Gloucester having to resort to two Daniel Openshaw penalties, as Irish’s defence held firm over the first 40. A penalty try early in the second half, for a trip on Will Attfield, gave Irish the confidence they needed to see out the game and further scores from Harry Norton and Ollie Hasslle-Collins took the game beyond the Cherry and Whites. A late consolation score from Mason Tonks did little to brighten Gloucester’s day.

The fact that Gloucester were able to prevent gargantuan wing Joe Cokanasiga from registering a try is almost a victory in itself and there is still plenty to be positive about moving forward for Gloucester. An injury to electric scrum-half Harry Randall prevented him from having the effect on the game he would have wanted, while Tonks, Harry Robinson and Joe Mullis are all players that Gloucester Director of Rugby David Humphreys will have a keen eye on in the coming years.

As for Irish, talent abounds in this class. Cokanasiga’s physical gifts speak for themselves, while Attfield, Jared Leat and Isaac Curtis-Harris, to name but a few, all look to have very bright futures. With a number of key senior players retained already this season, if Irish can avoid relegation, their fortunes in the Premiership could begin to change for the better sooner rather than later.

It may not garner as much attention as the Premiership, but the quality of the academy league this season has been excellent and is real testament to the work being done by the coaches in all the clubs’ academies. With many of these players set to progress onto ‘A’ rugby next season and push for inclusion in first XVs, the future is certainly bright for the Premiership and England.