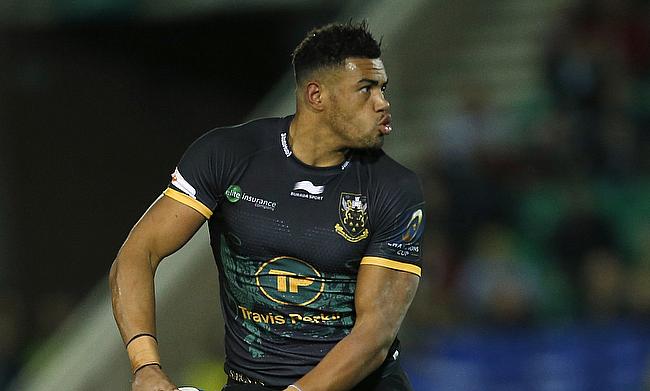 Luther Burrell turned in a fine display for Northampton
©PA

Northampton crossed for five tries as they brushed aside London Irish to claim a 35-7 Aviva Premiership victory at Franklin's Gardens.

The win goes a long way to reasserting their title credentials as it leaves them just two points of the play-offs.

On the day that the new £6 million Barwell Stand was opened, the Saints put on a fitting display with James Craig, Alex Waller, Jamie Elliott and Lee Dickson all touching down as well as penalty try adding to Irish's problems.

They remain anchored to the bottom of the table and after trailing 21-0 at the break, only got on the scoreboard thanks to a David Paice converted try three minutes from the end.

The wet conditions did not stop Northampton from playing an enterprising game, setting the tone for the match. Early on, Dickson tapped and went from a penalty on his own 10m line and when he was illegally stopped by Halani Aukila, the latter was shown a yellow card.

A revitalised Luther Burrell at 13 was lively throughout and after he almost set up James Wilson for a score, Northampton got themselves ahead as Carig touched down following a driving maul.

Stephen Myler made light of the windy conditions to land the conversion and the home side were up and running.

Three minutes later another maul led to the penalty try when it was brought down illegally, and Myler added the simple conversion.

Irish had their own driving maul from five metres out, but couldn't capitalise, Shane Geraghty - formerly of Northampton - also missing with a 45-metre penalty attempt.

Northampton then pounded away at the Irish line and after Harry Mallinder was held up short, the ball was moved right, Elliott offloaded and Waller scored a third try, Myler converting to make it 21-0 at the break.

Irish came out early for the second half and looked as if head coach Tom Coventry had read them the riot act.

And although Geraghty and Topsy Ojo almost broke through Northampton's defence, it looked to have made little difference.

Northampton countered with Dickson kicking over the top for Elliott to run on to, shrug Geraghty off and score the fourth try of the game.

From the restart Dickson crossed for Northampton's fifth to help Saints take full advantage of Harlequins' slip-up at Gloucester.

Tom Wood broke free of a ruck on his own 22, passed to Burrell, who offloaded to Jamie Gibson, and the flanker fed Dickson to score a fine try. Myler converted both tries to make it 35-0 after 50 minutes.

With 12 minutes to go, Northampton's replacement centre JJ Hanrahan was sin-binned and team-mate Gibson was also given a yellow card with four minutes to go and against 13 men, Irish finally got on the scoresheet.