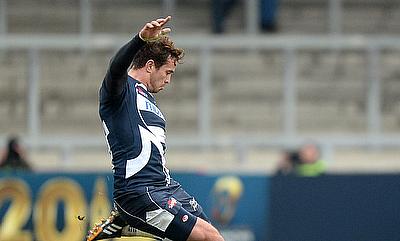 Sale held off a comeback in the second half by Exeter to claim a 23-17 win at the AJ Bell Stadium and boost their own hopes of reaching the top four of the Aviva Premiership.

Clinical in the first half, Sale went into the break with a 17-point lead, despite Exeter dominating at times, thanks to tries from Johnny Leota, Nev Edwards and Mike Haley.

Exeter launched a fightback after the interval through Jack Yeandle although Danny Cipriani struck a penalty to reassert the hosts' authority on the scoreboard.

Dave Lewis then touched down to reduce the gap to six points before Cipriani effectively secured the victory from the tee late on.

Gareth Steenson added a three-pointer in the last minute but the visitors left Sale with just a losing bonus point.

Exeter should have taken an early lead; gaps were regularly appearing in the home team's defence and that pressure resulted in a yellow card for prop Ross Harrison, who failed to retreat 10 metres after Will Chudley took a quick tap.

Exeter took advantage of their numerical advantage to lay siege to the Sharks' line and they had an opportunity when Thomas Waldrom went searching for the try from close range but the number eight was called back for a double-movement.

Ben Moon and Phil Dollman almost broke through but Exeter could not make their gains pay and would rue their profligacy.

The Chiefs had James Short sin-binned for taking out Will Addison in the air and, although Cipriani missed a difficult penalty, the first score of the game came soon after.

Mark Easter made the first break before the Sharks' back-rower off-loaded to Dave Seymour. The flanker was tackled before the line but a floated pass by the home side's stand-off landed in the grateful arms of Leota, who touched down.

The second try for Sale did not take long in coming as excellent work from Cameron Neild allowed Haley to break free. The full-back was faced with a simple two-on-one and although his final pass looked suspiciously forward, Edwards was allowed to sprint down the left and score.

Sale managed to cross the whitewash again, Haley reacting quickest to a Cipriani drop-goal which hit the post.

For the first time in the encounter, Cipriani landed a kick from the tee and that helped them into a 17-0 half-time lead.

Exeter needed a response after the break and they got it when Yeandle touched down.

Cipriani landed another penalty only for the Chiefs to go on the attack once more.

The visitors consistently pressurised the Sharks defence they only yielded 12 minutes from time when Lewis scampered over.

To the hosts' credit, they kept their composure and managed to see out the game through another effort by their impressive stand-off - despite Steenson gaining Exeter a bonus point in the last minute with a three-pointer.