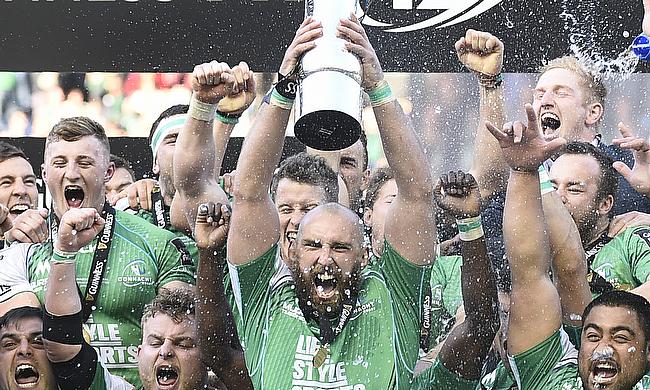 Connacht head coach Pat Lam wants his team to successfully defend their Pro12 title, which they claimed for the first time defeating Leinster in the final on Saturday.

Having made the final for the first time, Connacht put on a clinical display at the Murrayfield defeating the four-time champions Leinster 20-10.

Since, the 2004-05 season, the best position Connacht have managed in Pro12 was finishing the league at seventh, but the Galway men made a tremendous transformation this time around going on to create history.

With their aggressive approach paying huge dividends in this season, Lam wants his team not to dwell on the success but instead wants them to successfully defend the title in the upcoming season.

"True success doesn't rely on trophies because only one team takes the trophy home," he said. "We've won it this time and it's fantastic for everyone but we've got a plan and we have to keep going.

"We're back on June 30 for pre-season and I've already set the goals for next year. We've got to defend this title and go back-to-back. It's realistic for us to win this PRO12 again.

"The second aim is to get into the knock-out stages of the Champions Cup. I'll put that out there because come June 30 we start the work again.

"We know what we're building. That's the key, to set goals and work every day to achieve that."

Leinster, who topped the league in the group stage is one of the most successful team in the history of tournament having reached the final six times in the last seven seasons.

The Dublin based team were put under considerable pressure in the first half as Connacht took a lead of 15-0 riding on the tries from Tiernan O'Halloran and Niyi Adeolokun.

With Matt Healy scoring the third try in the 56th minute, it looked all but over for Leinster as they managed to score only a solitary try which came from Sean Cronin.

Leinster captain Jamie Heaslip lauded Connacht for the temperament they showed despite playing their maiden final.

"I don't think we were the big bad wolf. I thought they were favourites coming in because they were going well all season. They were the pace-setters, the highest try-scoring team.

"They are a tough side to defend against. The punish you in all sorts of different ways and a very good defensive side as well.

"The better side won and there's not a whole lot more that I can say. All credit to Connacht, though, they were very good all season."