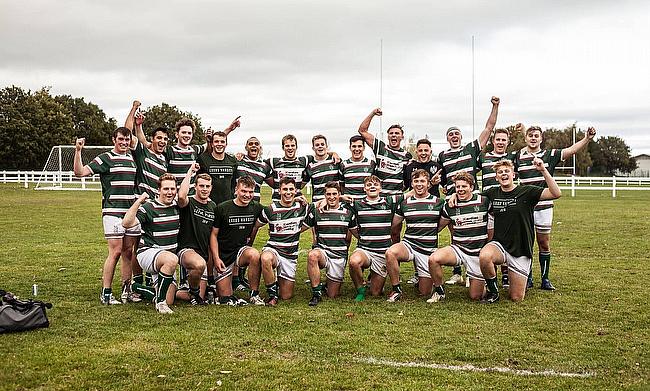 Giselle Mather: “I am proud of our fighting mentality but there is a lot more to come from Wasps
BUCS Super Rugby Round-Up: Beckett blow Bath away and Exeter thrash Swansea
University Rugby is strengthening its status within professional pathways - and it is only going in one direction
BUCS Super Rugby: The blank canvas and why we are set for a season of intrigue

The University of Leeds Head of Rugby Pete Seabourne has put an onus on “participation” and “enjoyment” for this season after the next layer of BUCS Rugby returned on Wednesday.

Following an 18-month absence, the top tier of the university game - BUCS Super Rugby - made a comeback last week and the leagues below sparked into life at the beginning of October.

Leeds, who compete in Premier North 1, kicked off the campaign with a 26-8 defeat against the University of Nottingham, but Seabourne is focused on reintroducing players to the sport following the Covid-19 disruptions.

Promotion and relegation is not a concern this year

Speaking to TRU, he discussed why results won’t determine their season and how the university has coped with the pandemic.

“I think I am in the same boat as everyone in terms of we have no idea what is going to be produced this season!” Seabourne said.

“We run five men’s teams and we have our women’s teams, so to me, it is about participation. Yes, I want us to be the best, but I want to produce good people and good rugby players on the back of it.

“I think that is why they should have forgotten about promotion and relegation for 12 months. I think it should have all been about getting everyone back playing after a year was taken out by Covid. That is across the board and not just at university level.”

‘The lockdowns were tough but productive’

To see the university game back up and running is something Seabourne is, of course, delighted about.

When the world went into lockdown in March 2020, university sport was dormant for a lengthy period, but Leeds took a proactive approach in order to keep their players engaged with rugby.

After conducting mini tournaments - within RFU and government guidelines - and allowing students access to their facilities, Seabourne coordinated two pre-season games against the University of Manchester.

He said: “Me from a Head of Rugby point of view, it has been tough but it has been really productive. When unis were allowed to start opening up again last year, we stuck to the RFU guidelines and the university guidelines, but we managed to get out, between the men and the women, over 250 people playing a form of the Ready4Rugby initiative the RFU rolled out.

“When we did get back up and running again on 29th March when we were allowed to re-open, I brought them back in that day and gave them the option to come back in if they wanted to and they could do what they wanted to.

“I didn’t do any real specific coaching with them because there was no means to an end. It was all about them going home in one piece, having a good summer and coming back into pre-season where we can focus more on rugby specific stuff which we have been able to do.

“We have had a good pre-season. A lot of people have engaged in it, which they always do, and I took two teams to Manchester which was good and really productive.

“I have effectively got two years of freshers to look at. There are second years now who I hadn’t seen play at all, so I am getting up to speed with them and then the freshers that have come in this time so you are seeing 120, 130 new players for the first time so it has been a bit chaotic!”

Leeds are taking steps in a positive direction

During the Covid period, the University of Leeds formed a partnership with Leeds Tykes.

Seabourne is also part of the set-up at the National One club and the relationship with both the University of Leeds and Leeds Beckett is designed to mutually benefit all parties involved.

“It is a massive step forward for Leeds Tykes and us to have this link because it gives players a pathway to National One and that is the same for Leeds Beckett,” Seabourne added.

“It does give players an opportunity to progress in rugby should they want to do that whilst also linking in their studies as well.

“I think it also helps with the identity of Leeds Tykes and that is what Phil [Davies] [Leeds Tykes Director of Rugby] is striving towards.

“You have obviously got Leeds Rhinos who are doing pretty well and you have got Leeds United who are smashing it up, so it is about getting rugby union in Leeds and Leeds Tykes back up and running and being successful in the city. From our point of view, it is that natural stepping stone so when Phil approached us, it was a no brainer for me.”

??‍?? Want to learn more about analysing your rugby matches?

And the University of Leeds are also looking to stride forward in their own way. This season, they have linked up with Veo, who are a global leader in AI-powered sports recording and analysis.

The club used their Veo camera for the first time in Wednesday’s fixture against Nottingham and Seabourne is excited by the benefits the technology can bring to the university.

“I am quite looking forward to using it this season! I have been a bit old school in the past where you have to take somebody with you to video the game and then you have to spend three hours going through it and chopping it all up!

“Veo does what it says on the tin. It will save me so much work every week and hopefully this will take what we do to the next level.

“If the players get the benefits I expect to get out of it, then I am going to buy a second one for the women’s teams. The problem is we all play at the same time on Wednesday afternoon and we are never in the same place so I can use it across the club. That is the next step forward.

“Technology is always learning and moving forward and obviously the players can buy into it. They can look at their own performances, comment on it and their playing standards and they can hopefully raise the bar every week.”

The competitive nature of university rugby

After beginning the new term with a defeat, Leeds are on the road again next Wednesday when they face Durham 2nds.

With Durham’s 1st XV currently BUCS Super Rugby champions and the likes of Leeds Beckett 2nds, Nottingham Trent and Newcastle all competing in the same league as Seabourne’s side, the standard of rugby in the division is expected to be at a high level.

Despite the Leeds boss admitting results and table positions are not top of the university’s agenda this season, he does expect his Premier North 1 compatriots to play an exciting brand of rugby.

“The standard is really good. I went to watch Beckett’s [who compete in BUCS Super Rugby] first match against Bath last week and you can see they are a step up from us in terms of physicality, size and probably standard of play as well.

“I do think there is more of a gameplan there whereas in our league, the ball is thrown about more and the standard is still high. At Leeds, we have not always been the biggest side, but we have been one of the fittest.

“I have always brought my teams up on ‘you play what you see and you throw the ball about’. I have always been a big believer in that and the development of players so as I say, we are focused on that philosophy and enjoying ourselves this season.”