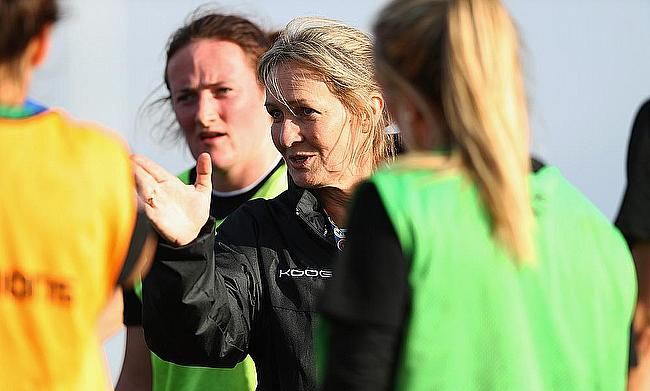 Giselle Mather has hailed the ‘fighting mentality' of her Wasps Women’s side following the first three rounds of the Allianz Premier 15s season.

With the league resuming this weekend, Mather’s charges have secured 11 points from a possible 15 but they have been without some of their key internationals since the beginning of the campaign.

With the likes of Claire Molloy away on Ireland duty and Abi Burton, Meg Jones, Celia Quansah and Amy Wilson Hardy becoming World Rugby Sevens Series champions with Team GB, Mather has been pleased by how Wasps have navigated their way through the opening block of fixtures.

“I am delighted with the way the players who have stepped up have performed when others have been away,” Mather told TRU.

“If you had said to me at the start of the season you have got to play Saracens, Loughborough and Worcester and several of your players are going to be away, I would have taken 11 points out of 15. It is because of how well the squad has performed. I am hugely proud of them.

“You are always developing through each round in the season. I would say that is the bit I am most pleased about, our fighting mentality, because we have produced some really good results, but I still think there is a lot more to come from Wasps and so there should be because we are only in Round Four.”

Susie Appleby’s side were highly competitive during their maiden AP 15s campaign in 2020/21, and the Chiefs are seemingly maintaining their levels of performance once again.

They were one of six teams who were all capable of clinching the title last term, but despite the quality of rugby on display, the league's profile has been under some scrutiny so far this season.

Bottom of the table DMP Durham Sharks have conceded 70 points or more in their three outings - including a 115-0 loss to Bristol Bears Women two weeks ago - which has raised question marks around the competitiveness of the women’s top flight.

For that game in particular, the North East outfit had a limited number of players at their disposal and Wasps boss Mather believes focusing on a few one-sided scorelines isn’t a fair assessment of the division.

She said: “I think the results you’re referring to, I know they are working hard to try and sort that out, but on any given day, the rest of us could take the other one down!

“I think you saw the other weekend Exeter beat Quins, and they really deserved to get the win. They also scored a beautiful try, so I think eyes were drawn to that performance in Round Three. They were very, very good and it was done away from home at The Stoop so that was impressive and we have got them this weekend!

“Bristol are obviously storming at the moment which is great for them. I think they finished eighth last season and now they are top and unbeaten, whilst Exeter finished sixth and produced results like that so I think that is good for the league.

“Our result against Worcester could have gone any way and the lead changed several times so it is exciting times for the league and we are only at Round Four!”

It isn’t a surprise to hear Mather talk positively about the strength of the Allianz Premier 15s as Wasps are certainly one of the clubs looking for that extra edge to drive them towards another top-four finish.

Helping them to achieve this are Veo, who are a global leader in AI-powered sports recording and analysis.

The club uses their Veo camera to record and analyse matches, but the added details it provides is something that Mather and her side benefit from on a daily basis.

“I think the beauty of Veo is how much it helps us in our environment,” Mather added. “You don’t need someone standing there monitoring it all. You just put the camera up and you just let it get on with it. That is what is so fantastic about it and also, the players can then access it too, plus they can make their own comments and things like that.

“The height of it is really good as well. Not every rugby club necessarily has a video tower so it does it all for you! It does make it so much clearer to see where space is. You are not stuck with a tight-fixed thing. You can see from a whole pitch perspective which does help drive our standards.”

Mather’s thoughts on Veo’s affordable and portable technology are echoed by Wasps Women’s analyst Gary English: “We class it as a 360-degree view which is effectively what Veo gives us even though it is 180-degrees!

“The three angles it offers just enables us to show players potentially what is to the left of them or what is to the right of them if they are faced with three defenders in front of them, for example, and what is in the background.

“It just gives us that confidence to say we might not see it on the field, but here is a mismatch which you can exploit.

“Just having these new technologies just enables us all to grow. It should enable players to get better across the entire sport and not just at an elite level which should mean that we should start seeing players coming up through the lower leagues and breaking into the elite clubs which, for the sport, is going to be huge.

Wasps will be keen to continue raising their own levels this weekend as they travel to Exeter, aiming to record their third win on the spin following victories over Loughborough Lightning and Worcester Warriors Women, respectively.

Following a trip to Devon, Mather’s side will host Gloucester-Hartpury at the Coventry Building Society Arena before two Allianz Cup fixtures against Bristol and Harlequins.

England’s autumn internationals with New Zealand, Canada and the USA are also taking place across October and November and Mather is once again hoping her side can successfully manage this latest cluster of matches.

“Of course, our aim is to keep winning which would be nice!” said Mather. “We have the opportunity to play Gloucester-Hartpury up at the Coventry Building Society Arena which is a great occasion for us and hopefully we will be able to convert some more fans to the game.

“From a performance side of things, we are in a really good place but it will also be about that integration of players coming back because you can’t just have people stepping back in.

“For us, we want to move our game plan further forward. We are showing glimpses of it at the moment, but we want to show a little bit more so the players can make those right decisions on the field more often.”

Talking Rugby Union are offering you £100 off your very own Veo camera. Quote TRU100 at checkout or on your call...