Northumbria move to the summit after Hartpury stun Exeter 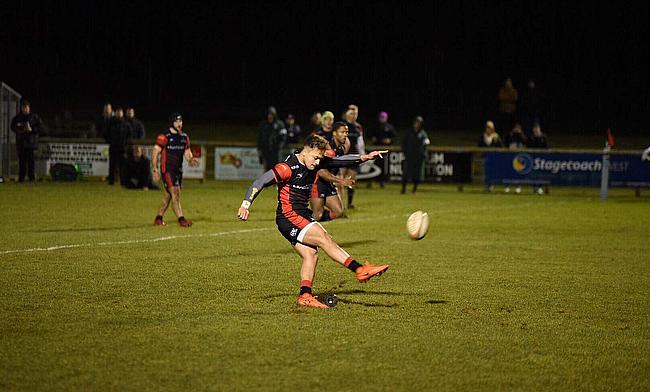 Northumbria University have gone top of BUCS Super Rugby after a bonus-point win over Bath.

Darren Fearn’s side ran in five tries to eventually see off a stubborn Bath outfit while Exeter failed to stay clear at the summit as they were left shell-shocked by a remarkable Hartpury fightback.

Northumbria and Exeter are level on points, but the North East side are top by virtue of ‘points scored’, while third placed Cardiff Met are right on the heels of the top two following a battling victory over Durham University.

Meanwhile, Leeds Beckett moved another step closer to a top four finish after edging out Loughborough University in Yorkshire.

Below is a full round-up of this week’s BUCS Super Rugby action plus some of the main talking points from our featured BUCS leagues.

The University of Exeter failed to increase their lead at the top of BUCS Super Rugby as a late Elias Caven penalty snatched victory for Hartpury after stunning comeback.

It looked as though Keith Fleming’s side had clinched their 10th win of the campaign when they led 26-10 just after half-time following tries from Simon Linsell (2) George Gosling and James McRae.

But, the current champions produced a brilliant fightback as two quick fire scores, one from Aquile Smith, added to Luke Stratford’s first-half try to reduce Exeter’s advantage to two points.

And as the clock ticked towards red, Hartpury were awarded a penalty and Caven kept his cool to seal a remarkable result.

Northumbria University have moved level on points with league leaders Exeter following a pulsating win over the University of Bath at Kingston Park.

Darren Fearn’s side battled for this victory, fighting back on a couple of occasions after Bath had held a 14-3 advantage in the first-half and a 21-20 lead just after the break.

Bath had taken an early lead through Will Partington and Luca Petrozzi and they found themselves ahead again at the start of the second period when Levi Davis dotted down in the corner.

Partington did score a second, but Northumbria were able to pull clear midway through the half and never relinquished their lead.

Bath did have the final say on proceedings as Mike Snook crossed for the 10th try of the game, but Aaron James’ side had to settle for a losing bonus-point.

Cardiff Met are just one point behind frontrunners Exeter and Northumbria as they held on to beat Durham University to maintain their hopes of challenging for the BUCS Super Rugby title.

Saul Melvin-Farr scored his second try in as many weeks to give the hosts the lead, but two converted scores from Edoardo Balocco and George Simpson, plus a penalty from Tom Morgan, put Met 10 points ahead.

Durham then cranked up the pressure and were rewarded for their endeavour as Rory Hardman grabbed a try to cut Cardiff Met’s lead.

Tom Catterick’s long range penalty reduced the deficit further, but Danny Milton’s side held on for the victory.

Leeds Beckett increased the gap between themselves and the sides chasing a top four finish after a narrow victory over Loughborough University.

The away side took a 5-3 lead thanks to Richie Lewis’ try after Beckett had opened the scoring from the tee.

Beckett then found themselves in front on 55 minutes as they capitalised on a Loughborough mistake to score, before the visitors reduced the lead to two points when Chris Davies landed a penalty.

However, despite Loughborough trying to fashion a final clear cut chance, Beckett held their nerve to slot over another three points to seal their seventh win of the campaign.

Newcastle University remain on top of North A despite falling to a 23-20 defeat against the University of Birmingham. The Midlands side have now picked up five wins this term, but their victory would also have been celebrated by Durham 2nds. The northeast outfit secured an 18-7 win away at the University of Nottingham to move to within a point of table toppers Newcastle. Elsewhere, third placed Leeds beat Loughborough 2nds 30-20 while Edinburgh thrashed Bishop Burton 40-10 in Scotland.

Hartpury 2nds are now two points clear at the summit of South A following a 41-26 victory over second placed Cardiff University. Hartpury have played a game more than the Welsh side, but it is now four wins in a row for the Gloucestershire outfit. Meanwhile, USW edged past Exeter 20-19 away from home.

North B league leaders Leeds Beckett 2nds moved closer to the title as they maintained their unbeaten record for the season thanks to a 31-6 win over the University of Manchester. The only other fixture in this division saw third placed the University of Strathclyde beat Durham 3rds 29-12. In South B, Hartpury 3rds made it nine wins on the bounce following a comfortable 50-28 win over Cardiff Met 2nds, while the University of Portsmouth held St Mary’s to a 26-26 draw.

The first fixtures of 2018 in Northern 1A took place this week and the University of Sheffield picked up from where they left off as the table toppers edged past the University of Hull 18-17. Second placed Durham 4ths also had a narrow victory as they beat Newcastle 2nds 22-19 while the University of Liverpool came away from Sheffield Hallam with a 22-5 victory.

In Northern 2A, Manchester Met extended their lead to seven points at the top of the division as they beat Lancaster University 33-3 while Bangor University remain without a victory following a 19-7 defeat away at Liverpool 2nds.

With Northern 2B leaders Newcastle 3rds not in action, Northumbria 2nds were able to move to within three points of their northeast rivals after a 16-7 win over Leeds Beckett 3rds. Elsewhere, the University of York picked up a crucial 29-17 win over Leeds 2nds down at the wrong end of the division.

The top two clash in Northern 3A between Manchester 2nds and Edge Hill University was postponed, so the attention turned to the bottom of the table as Liverpool 3rds sealed a potentially vital 17-5 win over Manchester 3rds. In Northern 3B, Newcastle 4ths cut Leeds Beckett 4ths’ advantage to two points at the top of the division following their 29-24 victory in Yorkshire.

In the Midlands, the University of Leicester have clinched the Midlands 1A title following their 20-5 win over second placed Warwick. Warwick are now 18 points behind Leicester with three games remaining meaning last year’s winners have retained their crown for another campaign. Elsewhere, third placed Nottingham Trent 2nds beat the University of Worcester 31-7 and Birmingham 2nds picked up their second win of the term after victory against Coventry University.

In the top Women’s divisions, there was just one game in Premier North as Loughborough University thrashed Newcastle 77-7 while in Premier South, both Hartpury and Exeter continue to battle for the title. League leaders Hartpury thumped Oxford 83-5, but Exeter remain level on points with the Gloucestershire side after a 55-0 win over Bristol.