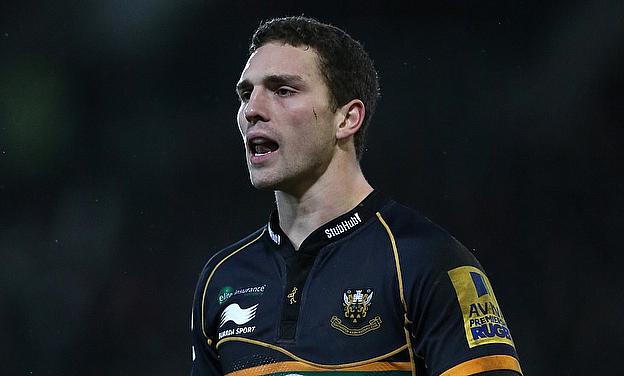 Northampton director of rugby Jim Mallinder celebrated the finishing prowess of George North after the Wales wing conjured the key score in the 23-9 victory over Harlequins.

Watched by England head coach Stuart Lancaster and his assistants Andy Farrell, Graham Rowntree and Mike Catt, North plundered a 45th-minute try that lifted Saints to the top of the Aviva Premiership.

The British and Irish Lion caught a poor clearance and raced along the touchline and into the left corner, bumping off a tackle from opposite number Charlie Walker in the process.

"We needed that from George, it was fantastic to see him score in the corner," Mallinder said.

"Young Charlie Walker is a talented player but when you're one on one with George, you have to make sure you make a good tackle."

Northampton's reign at the summit of the Premiership may only be brief as Saracens, who dropped to second, will displace them if they win at Gloucester on Saturday.

But Mallinder took satisfaction from having dispatched Quins in a title showdown after facing the accusation last season that Saints were flat track bullies.

"Doing the double over Harlequins is pleasing because of all that chat this time last year," Mallinder said.

"You remember things and we hurt last year when people said we couldn't beat a top four side.

"I'm delighted that we've done the double over Quins and beaten Bath and Saracens here. We've shown we can win big games."

England hooker Dylan Hartley, who was named man of the match, scored Northampton's second try in the 72nd minute.

The match was an awful spectacle that rapidly deteriorated into a series of uncompleted scrums and knocks-ons, moving from set piece to set piece until interrupted by the whistle of referee Greg Garner.

"It just seems to take too long. I know they need to get it right, but at one point they were looking at three different things," Mallinder said.

"It was a competitive game and there was plenty going on, but it does seem to take out the flow of the game."

O'Shea made his point more forcefully and also stated that Quins had suffered at the hands of Garner.

"I'm incredibly frustrated by how long energy is taken out of games by looking at decisions that could be easily made," O'Shea said.

"We'll give feedback through the right channels rather than when I'm emotionally charged and I am, trust me.

"We got on the wrong side of the referee for the whole match and the little things in the game went Northampton's way.

"I'm frustrated by a lot of what happened out there and I'm sure the crowd are as well. Everything possible that could have gone against us, did."