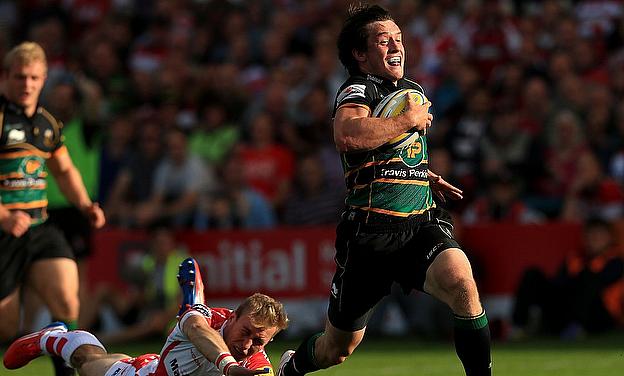 Northampton are determined to consolidate their relentless push towards securing a home tie in the Aviva Premiership play-offs when they host Harlequins on Friday night.

Victory over Quins at Franklin's Gardens would take Saints top of the Premiership above current leaders Saracens, who visit Gloucester on Saturday.

It would also put Northampton a minimum 13 points above third-placed Bath just over halfway through the league campaign.

The top two regular-season finishers after 22 games will have home advantage in the May play-offs, and Saints are well on course, having dropped just four points from a possible 30 in their last six games.

"We know what Quins can do to teams if you let them play," Northampton wing Jamie Elliott said.

"So for us the goal is, first and foremost, on Friday to stamp our authority on the game, to make an impression and not let them play.

"If we can do that then we will be in good shape. We know what a good chance this is to stretch the gap away from the other teams. That has to be our goal."

Newcastle host Sale Sharks in Friday's other game, with much-improved Sale seeking a win that would lift them into the Premiership's top six.

And Sale's former England wing Mark Cueto - the Premiership's all-time record try scorer - said: "It feels a good place to be at the moment, and that naturally comes with winning."

Cueto, 32, is out of contract at the end of this season, but he added: "I am definitely keen to carry on for another year.

"I always said I wouldn't play on simply for the sake of it. I would only do it if I felt I could play on at a level I was happy with and that I was still contributing to the team. At the minute, I would like to think that I'm doing that.

"So, I will be speaking to 'Dimes' (Sale rugby director Steve Diamond), and ideally I will be able to stay here. If that doesn't work out I would have to have a look around, but hopefully we can get something sorted out for me to carry on at Sale."

Fly-half Danny Cipriani, meanwhile, has recovered from a bout of flu that sidelined him from last Saturday's defeat against Leicester at Welford Road and he reclaims the Sale number 10 shirt.