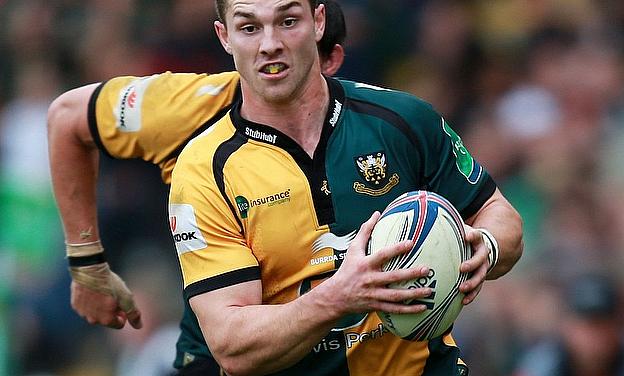 Wales wing George North propelled Northampton to the summit of the Aviva Premiership with the pivotal try in their showdown with Harlequins at Franklin's Gardens.

North brought a dire match to life when he caught a poor clearance and raced along the touchline and into the left corner, bumping off a tackle from opposite number Charlie Walker in the process.

The score four minutes into the second half broke deadlock from 6-6, and Northampton never relinquished control as they replaced Saracens, who face Gloucester on Saturday, at the top of the table.

England head coach Stuart Lancaster, joined in the stands by his Red Rose lieutenants Andy Farrell, Graham Rowntree and Mike Catt, left none the wiser ahead of the RBS 6 Nations opener against France in four weeks' time.

Lancaster names his elite player and Saxons squads on Thursday and this was a missed opportunity for fringe centres Luther Burrell and Matt Hopper to argue their claims to consideration for the coming months.

It was hardly an evening for threequarters to dazzle as the endless sequence of uncompleted scrums, presided over by referee Greg Garner, and numerous knock-ons made for dreadful viewing.

For a period in the first half play consisted of nothing more than a succession of set-pieces that would end with a blow of Garner's whistle.

England hooker and man of the match Dylan Hartley scored the match's second try with nine minutes remaining to ensure Northampton completed the double over Quins this season.

What followed was an awful spectacle as a series of reset scrums and handling errors resulted in constant stop-start play that had the 13,591 crowd grimacing.

Both clubs had made only three changes for the title clash, yet played in a disjointed manner that gave Lancaster and his assistants few clues for England selection.

Finally Quins injected life to the game as they attacked Saints' whitewash with a series of forward carries that brought them within inches of the line.

When the ball was released for the crucial play, however, Evans took the wrong option by kicking it away with the opposition stretched.

A penalty from Evans nudged Quins 6-3 ahead, but they were immediately under pressure as an attacking line-out saw flanker Tom Guest sin-binned for entering the maul at the side.

Northampton's raid was whistled to a halt, ushering in another dire sequence of aborted scrums, and when Guest returned to play a Myler penalty was all Saints had to show for the extra man.

North, Courtney Lawes and Burrell made runs, but the move quickly ground to a halt.

Saints generated more momentum early in the second half with centre George Pisi dancing into space, before North grabbed the loose clearance and charged over.

Myler converted but then made a mess of the simplest of penalties and when substitute Ben Botica landed three points from long range - Evans had failed to reappear for the second half - Quins were just 13-9 down.

Only Molenaar was penalised and shortly afterwards Myler, clearly carrying an injury, landed the points.

The match was put beyond Quins' reach when substitute prop Paul Doran Jones was sent to the sin-bin and Hartley snatched the ball from a line-out and touched down with Myler converting via the crossbar.

Pisi was shown a yellow card for a swinging arm on Hopper in the closing moments.