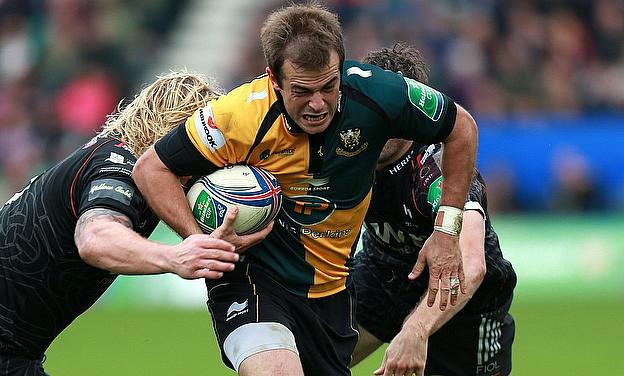 Stephen Myler is well-equipped to fill the void for England if Toby Flood moves to France next summer, according to Northampton Saints coach Alex King.

Myler's six from seven shots at goal helped Saints see off Bath 43-25 at Franklin's Gardens on Saturday, to cement second place in the league at New Year.

Toulouse are expected to recruit the former Newcastle Falcon - and a move to France would rule him out of international selection as England refuse to select overseas-based stars.

Former Clermont coach King said England coach Stuart Lancaster could do worse than look in 29-year-old Myler's direction if he needs to replace Flood next summer.

King said: "We know how important Stephen is to this team: he's played a lot of rugby this year, and played really well.

"And I'm looking forward to working with him for the second half of the season.

"England probably have four or five really good 10s, they are very well off.

"I don't know what Toby Flood's doing with regard to France, but if he does go with England's protocol of not picking players who play abroad, it frees up a spot so there are probably three or four guys in the Premiership now vying for that EPS squad role."

Myler won his first full England cap in the summer tour to Argentina.

Both Myler and Bath outside-half Ford are currently members of England's Saxons squad.

"Absolutely I would push him forward for England," said King.

"On days like Saturday both 10s had a good set of forwards in front of them.

"And I was really pleased with Stephen that he came out on top.

"That's the detail you work on in training: it's the skills the nines and 10s work on for hours every week.

"He's a fantastic goal-kicker and he was before I came here.

"His technique is spot-on, obviously I help him if he needs help, but there's a huge correlation between hard work and success.

"He works hard, there's no excuse or substitute for hard work.

"I thought he attacked the gain-line flat, his passing was good and he put us in the right areas.

"He took the right options and he's going well, and backed up by two good nines it gives us great options."

Wales wing North's aerial ability and strike-running power hauled Northampton back into Saturday's Bath clash after the visitors had taken a 13-0 lead.

He said: "George is an incredible athlete to get up in the air like that, and it's moments like that that can change a game.

"I thought those two high balls he took gave us momentum and field position and allowed us to put pressure back on Bath."