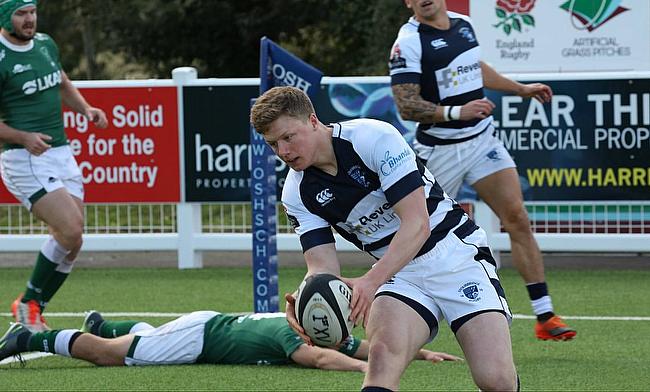 Bath confirm signing of Richard de Carpentier until end of 2021/22 season
Tom Parton Interview: “Now it is just about realising what we have here”
Worcester Warriors re-appoint Ted Hill as captain for 2021/22 season
A women’s Lions tour is ‘just another opportunity to grow the game’

Of the 15 seasons that Worcester Warriors have played in the English top-flight, the club’s highest finish to date was eighth all the way back in the 2005/06 campaign.

Noah Heward would barely have been aware of this fact given the full-back was just five years of age and only in the early days of playing rugby at Birmingham and Solihull RFC.

Fast-forward to the present day and he is now part of Jonathan Thomas’ squad, which is looking to break into the top six and bring Champions Cup rugby to Sixways.

If relegation had still been in place last term, Worcester would currently be a Championship club, but instead, they used the latter part of the season to turn their attentions to the 2021/22 campaign.

This included the appointment of Thomas as head coach, as well as the additions of Mark Jones as attack and backs coach and Jonny Bell as defence coach.

However, it wasn’t just the backroom staff that Director of Rugby Alan Solomons shook up. Adding experienced Premiership campaigners like Will Chudley, Willi Heinz, Scott Baldwin, Sione Vailanu, Chris Ashton, Owen Williams and Matt Garvey, as well as recent British and Irish Lions Rory Sutherland and Duhan van der Merwe, has given the Warriors faithful something to get excited about.

This has created a positive outlook for those who call the county of three pears home. Captained by 22-year-old Academy graduate Ted Hill, there has been an increased emphasis on the promotion of local talent since the rugby restart in the summer of 2020 where the likes of Heward, Ollie Lawrence, Oli Morris and Lewis Holsey flourished in the first team.

“I think that time period was massive,” Heward told TRU. “Those nine games that we had after the restart were probably some of the most important games that we have had.

Witnessing the likes of Hill and Will Butler moving into leadership roles at the club during the off-season, Heward says that has inspired him to take on more authority at Worcester.

“Especially last season with Ted and But’s getting put into those leadership positions, for me as a young player, it gave me a lot of hope," Heward said.

"It allowed me to be a bit more ambitious about what I can do at the club rather than just being a young player and understanding that I am going to be able to progress at this club and the coaches are putting their trust in those leaders who have come through the season.

“It also means, for example, some of the young players that have come in this season, like Cheick [Kone], Finn Theobald-Thomas, Tobi Wilson, when they come into the system and they see Ted is the captain, they see But’s in a leadership position, they can actually see that they are not that far away if they put in the hard work, do what they need to do, to actually play in the Premiership.

“And it’s vice versa. People like Ted and senior players that have come through the Academy like Justin Clegg, they understand what these young players need to start developing and it is just a good system of everyone being able to help each other in their journeys whilst hopefully moving up the table.

“I think that it is probably one of the most important things that we have got going for us, is all of the young players that have come from the local area and come through the academy.”

In recent seasons, there have even been returns for several academy graduates. This includes Graham Kitchener, who spent eight seasons with Leicester and Matt Kvesic, who spent seven years away from the West Midlands with Gloucester Rugby and Exeter Chiefs.

Following Worcester’s’ 36-24 victory over London Irish last weekend at Sixways, in which Heward started on the wing, the 20-year-old tweeted that the victory was ‘for Mitch Reeve’. Like Heward, Reeve’s journey began at Birmingham and Solihull RFC, the pair sharing an age group even if the latter was a school year younger.

It is a friendship that took them all the way to professional rugby but following a serious shoulder injury in a training match against Bristol Bears, Reeve has been forced to retire. Heward has had his own injury troubles recently, suffering a torn hamstring and a reoccurrence of the same injury, meaning that he did not play until the tail end of last season.

“I have known him a really long time and have spoken to him a lot through the whole process of what he was going through, with seeing medical consultants and stuff like that,” Heward said.

“I think the perspective it gives you is that you have just got to enjoy what we are doing for as long as it lasts. Firstly, a lot of people don’t get the opportunity, and secondly, it can end at any time. You have got to enjoy it as much as you can, as long as it lasts because you never know when it could be taken away from you.”

Starting on the wing again this weekend at Harlequins, Heward is finally back to full fitness following an injury-plagued season last year. Only managing two games in the 2020/21 campaign, playing against Leicester Tigers and starting against Newcastle Falcons, those matches brought a period of consistent frustration to a close.

Heward is now hoping to establish himself in the first team further, with Chris Ashton still recovering from injury and the unavailability of Van Der Merwe opening the door to the Birmingham-native.

“It was massively frustrating (last season) because I honestly felt like I was able to push for first-team places and to keep pushing on,” Heward said. “But credit has got to go to the strength and conditioning and physio staff, all the people that were on the medical team that were able to get me back so successfully.

“By the time I was back and fully up and running towards the end of last season, I was running faster than I ever had done before in comparison to what I had done before my injury and after being out with a hamstring for so long, it is pretty impressive that they were able to get me back in a position to do that.

?? We are sorry to announce that @mitchdreeve has decided to retire on medical advice.
Best wishes for future ventures Mitch. You will always be assured of a warm welcome at Sixways

“I am just grateful that they were able to look after me so well and put me in a good physical position to come into this season.”

For much of 2019, Heward spent time dual-registered with National Two North’s Stourbridge. Playing several games before joining the Academy on a full-time basis, the 20-year-old was then called into the Warriors squad for the club’s Challenge Cup campaign, making his debut against the Dragons.

Having had the opportunity to play in National League Rugby is something that Heward still sees as beneficial to his career, especially following conversations with some of the most recent intake of academy players.

“I spoke to a lot of lads a year younger than me that didn’t have the opportunity to go on loan because of Covid and I think that has probably restricted the extent to which they have been able to develop last season,” Heward said.

“They just hadn’t played that much men’s rugby, which I had the opportunity to do and it definitely really helped me to develop and understand what a real game of rugby is like when it is not at schoolboy level.

“I think that was really important, just being able to get down there and get as many minutes as you can but you need to be playing regularly so if you do get called upon, you are match ready to be able to play.

“I played five or six games on loan at Stourbridge at the start of the 19/20 season and it meant that by the time I came back in, I was match-sharp. I hadn’t just been training for eight weeks without having any minutes.

?? No match for Warriors this weekend but 6? of our Academy players will be on dual registrations with @nca_rugby or @Champrugby clubs around the country.

“I think that was one of the most important things as well so that when players do come back in, they are ready to perform for Worcester because they are used to games.”

Already this season, Worcester have announced which of their young players are heading out to clubs in lower divisions in order to gain some invaluable playing experience. This includes Fin Smith, Ollie Wynn and Morgan Monks going to Ampthill, Seb Atkinson at Cornish Pirates, Ben Murphy, Cheick Kone and Jack Forsythe at Luctonians and Tobi Wilson and Finn Theobald-Thomas have followed in Heward’s path by playing for Stourbridge.

Challenges don’t come much tougher than Warriors’ challenge on Saturday afternoon. Buoyed by the news that Hill and Lawrence have been called into Eddie Jones’ England training squad, Heward and his teammates will be heading into the den of the champions.

It will be Harlequins’ first game at the Stoop since beating Exeter Chiefs in June, with a sell-out crowd expected to be making their way to West London. Quins defeated Newcastle 26-20 at Kingston Park to start their title defence, with Tommasso Allan the star of the show.

A win on Saturday would be more than a statement as Heward and his teammates hope to break into the top six of the Premiership for the first time.

“Definitely the aim is top six,” Heward said. “But this weekend is for me, and a lot of the lads I have spoken to about the game, is a massive opportunity because Quins are going to be playing in front of, what I expect to be a packed-out Stoop for the first game they have had since they won the title.

“We feel that it is going to be a bit of a festival atmosphere and we want to go down there and spoil the party. We know what we need to do to stop the way they want to play and that’s why it is such a big opportunity because I don’t think there is as much expectation normally for a Worcester side going down to the champions away to get a result.

“But we believe we can do that this weekend. It is a big opportunity to just go down there, spoil the party and show them what we are about.”