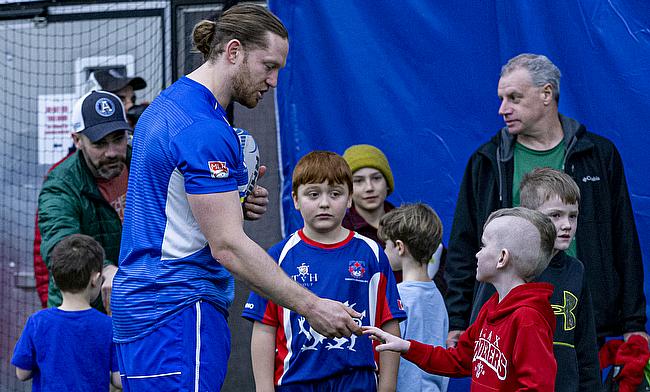 Ben Foden: 'Everyone is hungry to learn, hungry to play'
MLR 2020: All about to kick-off
Ben Foden: Saracens saga 'very interesting' viewing for someone that is sitting over in America
Magie ‘proud’ of his journey to the top

Whilst results didn’t go their way at the Rugby World Cup, things couldn’t have been going much better for Canadians in domestic competition.

In 2019, there were more players in professional environments than there ever had been before and Major League Rugby played a huge part in this.

On Seattle’s title-winning roster, there were seven Canadians but it was in Toronto that most of the nation’s internationals plied their trade. Debuting in MLR last season, Toronto surpassed expectations, performing strongly throughout the campaign as they secured a third-place finish and a spot in the playoffs.

Falling short to the eventual champions, Seattle, it would be understandable if the Toronto players and staff accepted their semi-final loss but, according to 2020 captain Dan Moor, the players, in particular, felt that they could have gone much further.

“It’s funny, externally a lot of people said it was a good success, but I know in our locker room, we weren’t satisfied with that outcome,” Moor said. “

“We had a squad that could have gone much further than we did and obviously we didn’t achieve that, so a big part of this year and this off-season, has been about putting in the work to try and get better.

“I have got all the belief in the world in the group that we have, that we have the ability, the character, to go out and go that one step further this year and that is definitely our aspiration. Last year we weren’t satisfied, our goals are higher this year, but at the same time, we can’t be thinking about games in June. We’ve got to be thinking about how we build some momentum into the season itself.”

Moor will be a familiar name to some on this side of the pond. Whilst studying at Oxford University, he not only picked up a ‘Blue’, but he was also on trial at Wasps for three months. Unfortunate not to pick up a full-time contract, the wing eventually settled at Yorkshire Carnegie before the temptation to return to his home city and play professional rugby proved too strong.

Named as captain for this season, the 29-year-old feels a tremendous amount of pride at being able to represent Toronto and help with the growth of rugby in Canada.

“It’s an incredible honour and something that I take seriously and want to do to the best of my abilities,” Moor said.

“I think, why it really matters to me is just the fact that you get to lead this group of guys. I think we have a really special group of people, both in the locker room as players, but also around the team in coaches and management.

“To be selected as one of the leaders amongst that group means a lot to me. Knowing the sort of calibre, integrity and character of those men. There is also something more broadly going on here in Canada. This really is the start of professional rugby in Canada.

“Canada has had its challenges I’d say over the last number of years on the international rugby landscape and I really hope that the Toronto Arrows will hopefully help the national team do better in that environment.”

About to enter their second year in MLR, Toronto had 10 players named in Kingsley Jones’ Canada squad for the World Cup last Autumn. The side even had two players in Uruguay’s squad, a team that which stunned Fiji in the pool stages of the tournament. With both of these factors, Moor believes that the influence of MLR can already be seen at the test rugby level.

“If you look at Andrew Quattrin, our young hooker, he probably only went to that World Cup through exposure, by playing for the Arrows in MLR,” Moor said. “He went there and I thought he really represented himself, our team and the Canadian national team really well.

“I can only imagine that another four years of professional rugby is just going to take his rugby to the next level. One thing I would say is that you saw Japan’s performance at this last World Cup, they only got professional rugby in 2003. Rome wasn’t built in a day. I think this next four years is going to see a positive improvement in Canadian Rugby.

“It is going to take longer if we really want to consistently compete with the giants of World Rugby. One great thing about this game is that, because it is so global, we can learn from other programmes. These Uruguayan guys that had a massive upset victory over Fiji that was huge in their rugby history and landscape.

“If we are able to learn anything from their culture, how they went about that or their own development, because they have come along in a big way over the last four years, then I think that could also aid us in the future.”

Memories from the last time we played in Austin ??

Starting their campaign this weekend in Texas against the Austin Gilgronis, Moor and his teammates have a simple goal. Surpass last year.

“Win a championship. That is our aspiration, that’s our goal,” Moor said. “We know it is going to take a tremendous amount of work and a whole bunch of things to make sure that they align, but I think the key thing for us is just to focus on the variables that we can control, making sure we are putting our efforts to be the best we can possibly be at those different aspects of our game.

“If we are able to do that, I think we proved last year we have a very competitive squad. Again, the level of the league is rising considerably, so we have to make sure that we are working as hard as we possibly can to be competitive this year, but I am very confident in the group we have and the opportunity in front of us. Now we have to make sure that we go out and execute it.”