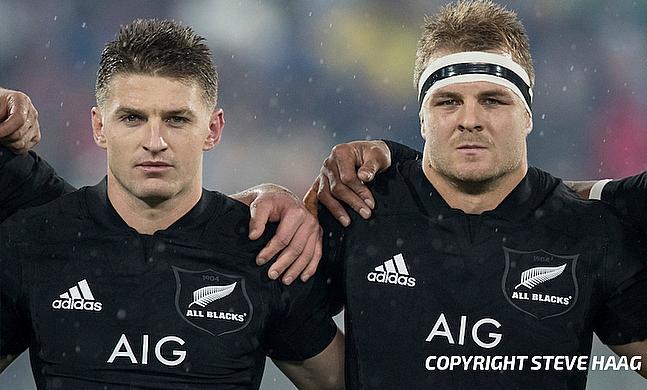 Matsushima shines as Japan begin with win over Russia
RWC 2019: Podcast Special
Seb Negri Column: To be part of a World Cup is special
Rugby World Cup Pool B Preview

New Zealand had to withstand a revival from South Africa, but the defending champions came through to beat South Africa 23-13 in Pool B. Joe Harvey has his say as the All Blacks begin with a victory.

On the day that Fiji could have beaten Australia and France almost faltered against Argentina, all eyes shifted to the International Stadium Yokohama as two powerhouses of international rugby clashed on the opening weekend of the Rugby World Cup in Japan.

When the Springboks and the All Blacks clashed in the summer, it was a 16-all draw, the result that probably won South Africa their first Rugby Championship in 10 years as the Rassie Erasmus experience continued. The All Blacks come into this World Cup with some question marks surrounding them, but they put those doubts to bed by overcoming the Springboks.

It could be fair to describe the first half of this match as an interesting one. Early on, the Springboks were using possession well, chasing down their own kicks to good effect and often regaining possession, not allowing anyone in a black shirt to get the ball in their hands.

Rassie Erasmus’ men benefitted from this too. After just a minute, Handre Pollard kicked a penalty from some 52 meters out, giving the Boks an early lead. As the old adage goes; a team is always weaker after scoring. Unfortunately, this was the case for South Africa too.

“It was a heck of a Test match” hear from All Blacks captain Kieran Read following the 23 - 13 victory over @Springboks.#NZLvRSA #BACKBLACK

All it took was one loose Faf de Klerk pass to spring the All Blacks into life. Richie Mo’unga raced downfield before being hauled down illegally, leading to the 25-year-old slotting a penalty to even the scores. New Zealand took the lead some minutes later.

Continued South African errors handed the All Blacks possession. A strong Ardie Savea carry took his side deep into opposition territory, Beauden Barrett then got the ball in his hand and when in contact, he offloaded to George Bridge who raced over the whitewash. Mo’unga converted to keep the scoreboard ticking over.

Yet another All Blacks score followed. This time a break from Anton Lienert-Brown into Bok territory wasn’t dealt with and when Scott Barrett got ball in hand, there was simply no stopping him as he darted under the sticks to give his Crusaders teammate, Mo’unga an easy conversion. There was plenty of to and fro before the end of the half, but it was 17-3 at the break.

It was South Africa that got the first score of the second half. An inspired Cheslin Kolbe break eventually led to Eben Etzebeth carrying the ball to around 10 meteres out. New Zealand didn’t commit enough men to the ruck leaving Pieter-Steph du Toit to run over unopposed and giving Pollard an easy conversion.

After a period of fairly aimless play were neither side made too much headway, South Africa decided to get some more points on the board. Handre Pollard lazily clipped a drop goal over the crossbar to make the score 17-13 with just 20 minutes to play.

Mo’unga’s last action of the game was to make the gap between the teams seven points once more. The South African front row was deemed to stand up in the scrum, giving the All Black a fairly difficult penalty before being replaced by Ben Smith.

A South African offside resulted in Beauden Barrett’s first kick of the game. The Blues out-half slotted the three points making the score 23-13 with less than 10 minutes to play. The All Blacks managed the game well from that point onwards as they prevented the Boks possession of the ball  and extinguished any South African hopes of a point from this game.

As ever with New Zealand, Steve Hansen’s men grew into the game. Not allowed possession for the first 15 minutes or so, the All Blacks eventually got the ball and the brilliance that has made them world renowned was clear to see.

It was the intelligence of Beaden Barrett that opened up the South African gates, allowing for a sea of black to swarm over them. Expertly weighted crossfield kicks allowed Sevu Reece to break the gainline twice in the first half and his offload in contact led to George Bridge’s try.

Ardie Savea showing why 7s is so important to @WorldRugby #NZLvRSA

Another who impressed throughout was Ardie Savea. Of course, the brother of former All Black wing Julian Savea, Ardie nurtured his skills on the World Series and showed some of that nous when taking on the Springboks. Stepping South African backs with ease, Savea carried extremely well in contact and is always a thorn in opposition sides.

In the lead-up to the World Cup, there had been a lot of talk about the All Black wing selections. Rieko Ioane has fallen out of favour with Steve Hansen, allowing George Bridge to become established in the 11 shirt. With Sevu Reece on the other wing the pair look too small, but each showed prowess in the air, with Reece taking two difficult balls against his opposite numbers.

It was South Africa errors that allowed New Zealand to take the lead in this game. Despite a very structured start, things like Faf de Klerk’s loose pass that led to Mo’Unga’s break and subsequent penalty kick was the beginning of Boks' poor spell in the first period.

Siya Kolisi seemed out of sorts too. Abesent from the successful Rugby Championship campaign due to injury, the Stormers flanker was eager to make an impact in this fixture and rushed out of the defensive line on several occasions before his replacement. This was worrying for South Africa as if any side could take advantage of such a mistake, it is New Zealand. Nothing came of Kolisi’s overexuberance, but on another day, things could have been different.

The @Springboks captain Siya Kolisi reflects on a physical game in Yokohama...

Stout wingers seemed to have been the feature of the day. On the Springboks right wing is a certain Cheslin Kolbe. A wing who has won the Top 14 had a startling break in the lead-up to Du Toit’s score. Added to this, his ability in the air allows him to often beat men bigger than himself and carrying strongly in contact, anyone with a fantasy team ought to get him.

South Africa just couldn’t maintain their impressive opening to the match. The next big opposition that they play won’t be until after the pool stages, after they will have most likely coasted to wins over Italy, Canada and Namibia. It does make you wonder if they will be ready for a no holds barred quarter-final.