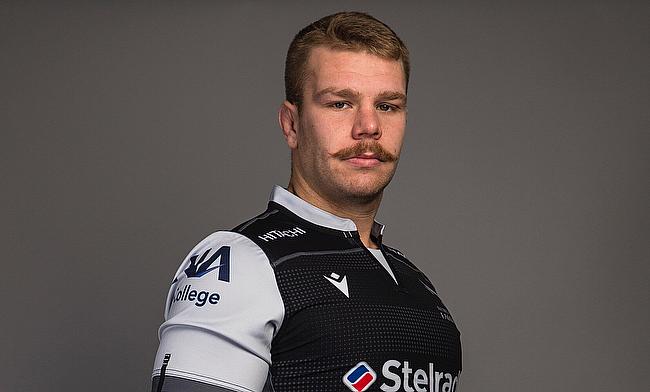 Why the return of the Championship means much more than just the resumption of the second tier
Video Highlights: Gallagher Premiership - Round 11
Match Centre: Newcastle Falcons 25-22 Harlequins
Adam Jones Interview: It's going to be a matter of time before Harlequins’ England stars get their chance

After missing the opening three months of the 2020/21 Gallagher Premiership season due to injury, Callum Chick’s return to action was a winning one.

Playing the full 80 minutes against Harlequins in Newcastle's last gasp 25-22 victory at Kingston Park last weekend, it was Chick who opened the scoring with a 12th-minute try.

Missing the start of the campaign because of a knee injury sustained in an intra-squad game - where the 24-year-old injured his PCL, MCL LCL and meniscus – Chick is due to have regular game time in the weeks to come with Mark Wilson away with England and Sean Robinson currently on the treatment table.

The game against Quins was Chick's first in nearly a year, with his last run out against Bedford in the Championship coming before the first lockdown. Now very much back in the team, he says watching the start of the season from home was frustrating.

“It came not at a great time," Chick told TRU. "It was after lockdown, had done a long pre-season and then we had an internal game and I done my knee. It is not how you want to end a pre-season or how you want to start a season, but it was one of those things. It is frustrating, but the lads have been playing fantastic.

“You want to be out there, but the boys were playing really well, and you just want to support them as much as possible because it is a one team thing. Everyone buys into it, always supporting everyone no matter who is out on the pitch.”

Kicked to victory by his Academy contemporary Brett Connon against Harlequins, Chick says as soon as the fly-half stepped up in the 79th-minute, he was ‘never really in doubt’ about the result.

5 SCORCHERS in the running for the Round 11 @thefamousgrouse Try of the Week! ?? @callum_chick, Facundo Cordero, Nick David, Tyrone Green (x2!) and @Mercer8Zach all scored beauties over the weekend ??

Thanks to victory last weekend, Newcastle sit sixth in the Premiership table and have another stern test in Sale Sharks coming on Friday night. Just three points separate the two clubs, the race for Champions Cup qualification heating up with each round of action.

Last November when the season restarted, Newcastle were tipped by the bookies to go straight back down to the Championship, however, Dean Richards’ side raced to the top third of the table, picking up wins over Bath, Sale and Wasps, respectively.

Since then, the club’s campaign has been disrupted due to Covid-19, with outbreaks taking place at both Kingston Park and elsewhere.

Their victory over Harlequins came three weeks after Falcons last took to the field. Losing 15-9 at the hands of Exeter in that clash, the majority of Newcastle’s match-ups this season have been won by the finest of margins and Chick was quick to praise the team’s mentality.

“It is probably a phrase that is used quite a bit; that northern grit,” Chick said. “I think we have got a bit of that, which is quite nice to see because things aren’t always going to go your way.

“As you have seen in a lot of our games, a lot of them have been won in the last few minutes of the game, but I think we have just got a habit now of grinding stuff out and winning games in that sense, which is quite a nice feeling to have and a confident feeling to have.”

They meet again on Friday!#GallagherPrempic.twitter.com/YANSYdJUKM

At the start of February, TRU heard from fellow Newcastle Falcons Academy graduate George McGuigan. Like the hooker, Chick is another success story to have attended the Gosforth Academy as part of the Falcons AASE programme and is very much the local lad.

From nearby Ponteland, the backrow started his rugby career with his hometown club and his brother,  Luke, still plays for the club. Chick has since progressed along the professional pathway, representing England at U16, U18 and U20 level before becoming a regular for Falcons.

No doubt supported every week by those who would usually be filling the bar at his old club on a Saturday afternoon, Chick, of course, is not alone in being a local in the changing room.

Charlie Maddison first picked up a rugby ball at Tynedale RFC, Will Welch at Northern RFC, Adam Radwan at Billingham RFC and Michael Young at West Hartlepool, just to name a few. Chick says a lot of the Falcons players are now realising their childhood dreams by being able to pull on the black shirt.

‘We have got a real contingent now of lads from this area, which is quite nice,” Chick said. “I grew up coming to watch the Falcons play and now being part of them is quite special. I think there is that feeling amongst quite a few of the lads.

“Obviously, we have lads from overseas who are fantastic players, but it is different playing for your hometown club, I think. It is the pride in it and wanting to win for your hometown, which is quite nice. I think Dean has got a big push on that as well, which helps the club and helps the drive of the club.”

Of course, Newcastle’s catchment area extends much wider than just the confines of Northumberland and County Durham, with Cumbria another hotbed to curate talent from. Mark Wilson is perhaps the epitome of this, whilst Brett Connon and Jamie Blamire are other prime examples of players from the north-west currently representing the Falcons.

Heading to Manchester to play Sale underneath the Friday night lights at the AJ Bell Stadium, Falcons will be buoyed by the fact that they beat the Sharks in the second match of the season, 15-13.

Not much of a spectacle, Newcastle kicked their opponents into submission in late November to pick up their second win in six days to carry on the momentum created by their 19-12 victory over Bath on the opening weekend of the campaign.

However, it has been all change at the AJ Bell, with Alex Sanderson replacing Steve Diamond as the face of Sale. Having won seven games so far this season, last Friday’s victory over Exeter arguably caught the eye the most.

Putting 25 points past the defending champions, it was a return to winning ways for Sanderson's charges, with the club’s World Cup winners Faf de Klerk and Lood de Jager proving influential.

Knowing Newcastle will have to take advantage of every opportunity presented to them, any match-up between Falcons and Sharks comes with the added moniker of being the ‘Northern Derby’.

“That ‘king of the north’ thing is one of the things we spoke about as our target for the next couple of games, but for us, it is just another game," Chick said. "We just focus on Sale, not really about where they are from or who they are.

“We just focus on their strengths and weaknesses like every other team and how we are going to exploit those and what we have to bottle up on their front. We know what we have got to deal with.”