Exclusive: George McGuigan - People can't question how hard we are going to work 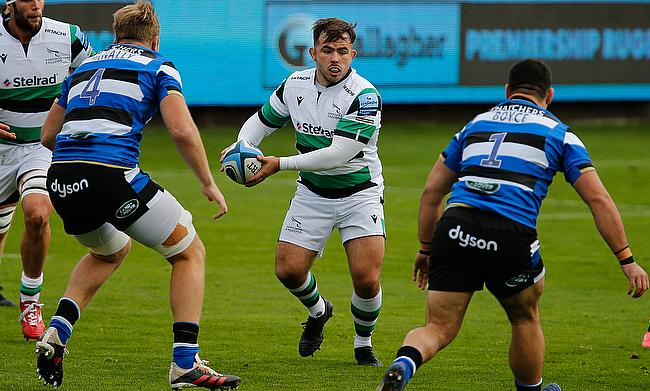 When the 2020/21 Gallagher Premiership season started, not many would have guessed that by the eighth round, Newcastle Falcons would be sat fourth in the table and four points adrift of current champions Exeter Chiefs.

In November, PaddyPower predicted that Newcastle were the favourites to be relegated and having not played for eight months, it was uncertain exactly what threat Dean Richards’ side would possess.

However, across the opening three fixtures, the Falcons proved that they would be no-one’s whipping boys this term.

Starting off away to a Bath team that finished in the play-offs just weeks before, Newcastle beat their hosts 19-12. Following that, they grabbed a late victory against Sale Sharks at Kingston Park before defeating last year's Premiership finalists, Wasps, 27-17 at the Ricoh Arena.

Experiencing a loss to Cardiff Blues and a win over Castres in Europe, it has been a bit of a mixed bag for the team since returning to domestic action. Receiving four points after their visit from Leicester was cancelled due to Covid-19 cases in the Tigers camp, Newcastle’s only win in the last three matches was against Gloucester nearly four weeks ago.

The Falcons suffered a defeat at the hands of London Irish at the Brentford Community Stadium last weekend so Sunday’s game against Exeter gives Newcastle another chance to recapture the form that has put the team in play-off contention.

“The year we got relegated, it was absolutely heart-breaking going from fourth to relegation,” Newcastle hooker George McGuigan said. “If you look at that season (when Newcastle were relegated), the amount of games we lost by a point, where the season before we had won it by a point.

“We know the nature of the league is that it’s very, very close and those small margins are going to cost you, so going back into the games, we were trying to make sure that we came out on the right end of those results and it has been working out for us so far this year.

Winning on their return to the top-flight, the performances of Newcastle's two young wings certainly caught the eye.

Four days on from their efforts, TRU have seen how the local lads compared to their international opposition??

“Obviously, this weekend went against that, but we knew it was going to come down to the tiny margins and we brought in this mentality of working harder than any other team. People can’t question how hard we are going to work and that is what we have tried to build our team ethos on going into this season. I think it has been working out quite well for us.”

Regaining promotion to the Premiership at the first time of asking, McGuigan’s performances in the second division were vital to the club making it back to the top-flight. The hooker scored 10 tries and finished joint-top of the try-scoring rankings with his club teammate Adam Radwan.

Playing their final game of the 2019/20 season in mid-March against Bedford, Newcastle had to watch on as their Premiership counterparts completed their season. When it was safe to do so, the Falcons began preparing for the new campaign but their only taste of rugby before the start of the season was back-to-back friendlies against Ealing Trailfinders.

“We had a long pre-season,” McGuigan said. “That obviously meant that we went into the season very prepared, we all knew our roles. I think we made a few good new signings, people like Marco Fuser have made a big impact on our team and I think the boys are all really buying into what we are trying to do.

“There was a long time of us training together, with no game at the weekend, it was just a case of everyone buying into what we were trying to do there and we had lots of hard sessions and that kind of bonds you together by putting yourselves in those dark places.”

Another homegrown bright prospect emerging from the @FalconsRugby youth system! ?

A massive congratulations to Will Montgomery on making his #GallagherPrem debut in Round 7 ??

Excited to see more of him in action this season? pic.twitter.com/fuZhwx5UOT

Having come through the ranks at Newcastle, McGuigan was the first graduate of the Falcons’ AASE programme, going on to make 69 appearances for the club before moving to Leicester Tigers. He spent two seasons in the Midlands and also represented England Saxons during their tour of South Africa.

Coming back to the club he started his career at, McGuigan returned to a side that had just reached the Premiership play-offs.

Drawn in the Champions Cup with Edinburgh, Toulon and Montpellier, Newcastle picked up wins against the two French teams, but by the time the pool stages had ended, the Falcons had fallen out of the competition and were beginning to slide down the Premiership table.

Eventually finishing bottom with 31 points, 10 less than their nearest rivals, Newcastle set about taking the Championship by storm and they had not lost a single game before the season was called off. Waiting for such an extended period of time before playing Bath in November, McGuigan says there was a sense of trepidation before returning to play.

“It was a little bit unexpected,” McGuigan said. “We hadn’t played in nine months. Everyone was a little bit nervous going into that first game, I guess, especially after our pre-season games didn’t quite go as well as we’d wanted.

“Then the first game came, and we played much better than we had done and put in a decent performance and everyone just said; it’s just a game of rugby and at the end of the day it was 15 people versus 15 people.”

As a result of their strong start, Newcastle back-rows Mark Wilson and Gary Graham have been called up to represent England and Scotland for the Six Nations. As you would expect, by propelling their club towards the top of the Premiership, players like Wilson and Graham have caught the eye of Eddie Jones and Gregor Townsend, respectively.

Added to this, Toby Flood has proven that age is just a number with his influential performances at both fly-half and in the centres, whilst young wing’s Adam Radwan and Ben Stevenson have begun to make the 11 and 14 jersey’s their own.

USA second-row Greg Peterson has been ever-present in the pack, having played every minute in the Premiership up until last weekend when he was replaced in the second half against London Irish.

With plenty of these players still available to Richards and his staff throughout the Six Nations period, the loss of Wilson and Graham is helped by the return of John Hardie from injury, as well as the experience that players like Philip van der Walt possess.

This weekend’s clash with Exeter will prove a good barometer for how the team will fare over the next two months. Naturally disappointed by the performance last weekend, McGuigan says he is fully confident that his coaches will set the team up well for a visit from the double champions.

“The coaches come up with a game plan each week and what they think will beat the opposition team,” McGuigan said. “Against Sale, we had the game plan that we would kick the ball to them, and they’d kick it back and we’d get into an arm wrestle with them and we’d come out on top. We did that day.

“Then you look at the Wasps game, we knew they’d throw it around and we knew we’d play a bit more. We played a bit more on that day, caught them in their own 22 when we thought we would, and it worked. The game plan worked again, and I guess they’ll come up with a game plan for Exeter and we will try to impose it on them.

“I think it is going to come down to the 'who wants it more' battle. Exeter are obviously a very good team, but they built their whole game plan on working teams, keeping the ball on the field and trying to outrun teams. If we go in with a mentality that we are going to outwork them, we won’t be far away.”