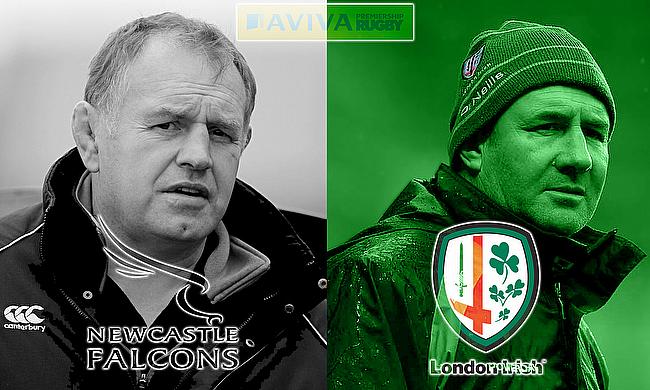 It’s the big one in the Aviva Premiership this weekend.

No, not the fiery affair that is the East Midlands derby, where both Northampton Saints and Leicester Tigers are gunning for playoff places.

And no, it’s not the glamour of the London derby at Wembley, either, where Saracens and Harlequins will put on a show for over 77,000 at the home of football.

It’s the bottom of the table clash between Newcastle Falcons and London Irish at Kingston Park that will have undivided attention.

With just three games of the regular season left, Newcastle sit four points above Irish, who are rooted to the bottom in 12th spot. Both teams have four wins to their names, so should Irish win on Sunday and deny Newcastle a losing bonus point, they will go above Falcons in the table. Similarly, if Irish win with a bonus point and Newcastle also manage a bonus point of their own, Irish will again leapfrog them in the table.

However, if Newcastle lose and pick up two bonus points, they will retain their position of 11th in the table. There are plenty of permutations to work out, but with just two more games each after this remaining, it is impossible to overestimate just how important these upcoming 80 minutes are for both clubs.

Newcastle’s penultimate game of the season sees them travel to London to take on high-flying Saracens, before finishing up by hosting Sale Sharks at Kingston Park. It’s difficult to see them taking anything from Saracens, but their home clash with Sale does offer a slight glimmer of hope for Falcons should they fail to beat Irish on Sunday.

As for the Exiles, their run-in sees them host Harlequins, before making the trip to Coventry to take on Wasps. Given Wasps’ current form and Irish’s travails on the road this season, that game could be a write off for the side from Reading, meaning that they have to beat Newcastle this week, lest the gap between the two teams increase to eight points. This would in turn demand that Irish beat both Quins and Wasps, as well as hoping Newcastle pick up no points from their remaining fixtures. As such, a loss would all but relegate Irish from the Premiership.

With such weight on this fixture, it’s unfortunate for Irish that their away form this season has been nothing short of horrific. They have lost all nine of their fixtures on the road in the Premiership and their sole away win came back in January, against Agen in the European Rugby Challenge Cup. Meanwhile, Newcastle’s four Premiership wins have all come at Kingston Park, where they have beaten Bath, Harlequins, Leicester Tigers and Northampton Saints.

It doesn’t project to be an exhibition of attacking rugby on Sunday, with neither team having secured a single try bonus point this season. In fact, the two teams’ combined try tally of 59 is just one more than Exeter Chiefs have scored alone, and just two more than Wasps.

Both sides’ poor defences will give hope to those pulling for an end-to-end, free-scoring clash, but chances are it’s going to be a tense, hard-fought affair with both teams more worried about losing the game than they are determined to win it. Irish’s current predicament at the bottom of the table could lead to them playing with a nothing to lose mentality, but that may not be the wisest of game plans given their efforts so far this season.

Irish have displayed little of the Chiefs’ mesmeric ability with ball in hand this season, despite Tom Coventry’s attempts to get the Exiles playing with some of his former side’s self-belief. The harsh reality is that the skill sets are just not there in Reading to play in that fashion. It’s not an easy evolution for a side and even Leicester, with their impressive pool of players, have had their hiccups in adopting a more free-flowing style.

Trying to run before you can walk is an ambitious and foolhardy goal in equal measure, but potentially one that has long-term benefits in a closed shop like Super Rugby. In the Premiership, where relegation looms ominously, it is not advisable, especially at a club that was always going to be in the mix for the drop this season.

For Irish, knock-ons, missed passes and butchered opportunities have been the story of their season and one that they will need, somehow, to rectify over the coming days if they are to have any chance of maintaining their Premiership status.

The odds are in Newcastle’s favour going into the match on Sunday and the way Irish have played on the road this season, the Falcons are good value to all but secure their Premiership future at a packed out Kingston Park this weekend.

Do Irish have the ability to turn things around and pick up their first road win of the season? Yes.

Will they get out of their own way and put in an efficient, winning performance? It seems unlikely.