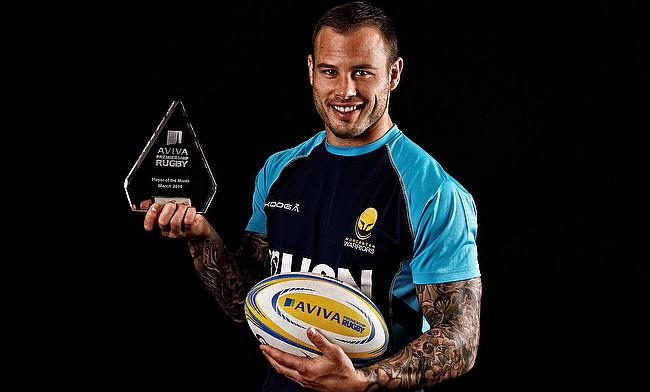 Scrum-half Francois Hougaard was instrumental in the Warriors’ becoming the only side in Aviva Premiership Rugby to win all four matches in the month, setting a new club Premiership record.

“I don’t think there has been a better mid-season signing than Francois,” said BT Sport’s Austin Healey, “and, while he would be the first to acknowledge his teammates, he was a vital ingredient to those victories as they secured their place in next season’s Aviva Premiership Rugby.

“There is always a risk associated with signing a player halfway through a season, but this was a superb piece of business by Dean Ryan.”

Hougaard made an incredible start to the month producing a man-of-the-match performance in the 15-14 victory at Newcastle Falcons – the Warriors’ first away success in Aviva Premiership Rugby for two years.

“Francois has had a huge influence on the side in a short space of time,” said Ryan after Hougaard recently signed a new permanent contract at the club.

Hougaard was involved in a three-way battle for this month’s title, eventually beating Saracens’ full-back Alex Goode and Northampton Saints’ back rower Teimana Harrison to the title.

Rugby fans also had their say on who deserved to win the coveted Aviva Premiership Rugby Player of the Month Award as they became the 10th Judge. Joining the panel of nine judges, fans voted for the player who had impressed them the most during the month of March.

One lucky fan who votes as a 10th Judge will be selected at random to win tickets to the Aviva Premiership Rugby Final at Twickenham on 28 May.

Hougaard wins a trophy and a £250 donation to the charity of his choice.