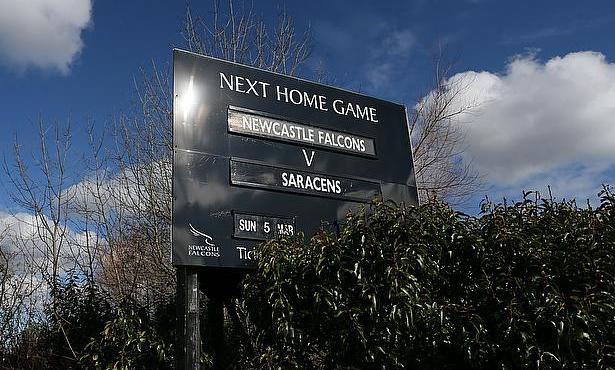 Fly-half Craig Willis stated that Newcastle Falcons are looking forward to the challenge of playing in Philadelphia when they host double European champions Saracens in round three of the Aviva Premiership on Saturday.

The Falcons started their preparation for the high voltage clash later on Monday following a team meeting and will be looking to build on the momentum they had from wins over Sale Sharks and Worcester Warriors that saw them occupy the second position in the table.

"People outside of the club might be surprised that we’re up around the top of the league, but this is where we thought we would be," said Willis.

"It has only been two games so it’s early doors really, and nobody is getting carried away in the slightest.

"It’s great for our supporters and everybody who has backed the club to see us in those kinds of positions, and as a group of players and coaches we’re really ambitious.

"We’ve had a good pre-season, it has been tailored to our needs and we’re just building on the hard work of last season. There have been some good additions, we’re a tight group and we’re just quietly going about our work."

The 22-year-old also believes the encounter at Talen Energy Stadium on Saturday will be a perfect opportunity to spread the game and also help the club reach a wider range of fans.

"This is my first time in America but I’ve always been interested in coming over, so it’s great to finally be here and be part of this event. From the Falcons’ side it’s a great opportunity spread awareness about the club, commercially it’s beneficial and for the Aviva Premiership as a whole it puts the league out there on the international stage.

"America is a potential hotbed for rugby. We know there’s already a decent rugby community and it’s a case of building from that foundation.

"The travel won’t be an issue and we’ve put plans in place to deal with our recovery. The coaches and our strength and conditioning staff are on top of all that stuff, and nothing is being left to chance.

"We’re here for the full week, we’re preparing in a thorough way and it’s absolutely fine in that sense."

Meanwhile, Ryan Burrows, who joined Falcons after captaining Yorkshire Carnegie last season reflected on his time with the club and the atmosphere at the new venue.

"It’s been good so far. The weather here helps, with it being nice, and we’ve began to see a little bit of the place. We trained on Monday and visited the Philadelphia store of one of our official partners, Barbour, to help promote the game. We’re serious about how we’re approaching this week and the approach from the boys has been spot-on.

"I think it’s a great idea bringing an Aviva Premiership game over here, personally. It’s a global game nowadays, we want to spread the sport and it’s good as a player to have these opportunities.

"My time at Newcastle has been great so far. There’s a real buzz about the club, things are getting better all the time and that all comes from the great work the lads did last season. We’ve built on that against Worcester with a big home win, we ground one out at Sale and then a challenge like this week in America is something else to get excited about.

"If you’re going to move a game 3,500 miles from home it might as well be against the European champions. Sarries have been one of the top teams for a number of years now, we know what they bring and there’s no better game with which to test ourselves."