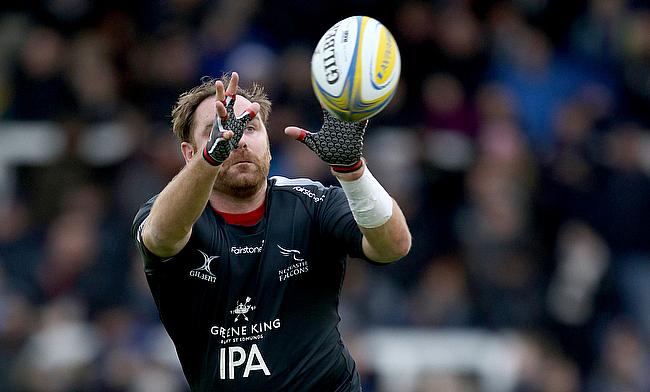 Newcastle gave their hopes of beating the drop a boost as the Falcons survived a Northampton fightback to record their fifth home win in succession.

In front of their biggest crowd of the season the Falcons hung on bravely for a 26-25 victory, having led 26-11 for much of the second half.

Newcastle put the disappointment of having an early try ruled out to lead 20-11 at half-time with their tries coming from Alex Tait and Chris Harris.

Andy Goode also kicked 16 points for the hosts, while Northampton's three tries came courtesy of two from scrum-half Lee Dickson and one from Jamie Gibson.

The hosts thought they had scored after just three minutes when Marcus Watson surged through, but, after a long look at the big TV screen, referee Wayne Barnes ruled Falcons skipper Will Welch had obstructed Sam Dickinson and ruled it out and awarded a penalty.

It was an admittedly marginal decision which did not please the crowd, but they were celebrating again four minutes later when Tait crossed after a series of forward drives orchestrated by Michael Young and Goode, whose long cut-out pass sent in Tait for the score.

Goode converted for 7-0 before Saints hit back with some pulverising forward play of their own and flanker Gibson smashed his way through for a 13th-minute try.

Stephen Myler missed the conversion but slotted a 19th-minute penalty for an 8-7 lead when Newcastle were caught not rolling away right in front of their posts.

Three minutes later Goode made it 10-8 with a penalty when Sean Robinson was taken in the air chasing a box kick.

Dickson was extremely fortunate to escape sanction when his boot came into contact with Ally Hoggs's head and the number eight was forced to leave the field for treatment, referee Barnes deciding it was accidental after looking at the incident again on the big screen.

Barnes then awarded a penalty which allowed Myler to put the visitors back in front in the 27th minute.

Watson and Simon Hammersley were troubled Northampton throughout and after a run by Watson, Hammersley's deceptively gangly style twice opened up the Saints defence and the full-back nearly scored in the corner.

He was stopped just short, but powerful centre Chris Harris snapped the ball up to score and Goode converted for Newcastle to lead again 17-11 on the half-hour.

Then he added a penalty when Northampton wheeled the scrum for the Falcons to lead 20-11 at half time.

Goode was on target again with two successful kicks in three minutes to make it 26-11 early in the second half as Keiran Brooks was penalised for not releasing in the 47th minute and the Saints strayed offside at a maul in the 50th minute.

Northampton hit back when Dickson wriggled over from a five-metre scrum and JJ Hanrahan converted to make it 26-18.

Newcastle's pack was showing signs of strain and three penalties in a row had them back in their own 22 and under pressure From another scrum penalty and a line-out in the corner Dickson squeezed over for his second try and Hanrahan converted to trim the lead to 26-25 in the 68th minute.

Northampton threw on their big guns, including Victor Matfield, and it looked as if they would snatch victory with a line-out in the Newcastle 22 with 14 seconds on the clock, but Newcastle turned the ball over and cleared it into the delirious crowd.