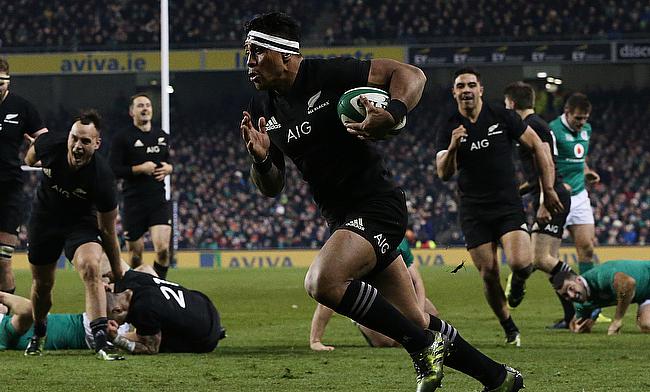 New Zealand centre Malakai Fekitoa has been handed a one-week ban by the autumn international disciplinary authorities following the game against Ireland in Dublin.

Fekitoa performed a high tackle on Ireland wing Simon Zebo and was sin-binned in the 48th minute of the game by referee Jaco Peyper at Aviva Stadium which the All Blacks went on to win 9-21.

Fekitoa returned back and scored his second try in the game in the 65th minute but according to the disciplinary chiefs, the 24-year-old's act was "reckless" and should have attracted a red card.

"The disciplinary committee found that Fekitoa's actions would have warranted a red card, albeit that he had acted recklessly rather than intentionally," read the statement.

Meanwhile, New Zealand flanker Sam Cane, who also attended the hearing on Tuesday for performing a high tackle on Robbie Henshaw was cleared of the charge and is now set to feature in All Blacks' upcoming game against France.

The statement from the disciplinary chiefs further added that the ban on Fekitoa was reduced from two weeks to one considering his admission of guilt and a clean track record.

"When considering sanction, the disciplinary committee concluded that the offending merited a low-end entry point based on World Rugby's scale of seriousness, which carries a two-week playing suspension," continued the statement on Fekitoa.

"And as such his playing suspension should be reduced to one week.

"Fekitoa is therefore suspended from playing rugby for a total of one week, up to and including Sunday 27 November 2016."

Earlier, Ireland team manager Mick Kearney slammed the officials of Saturday's game for letting New Zealand players off the hook despite the causalities suffered by his players.