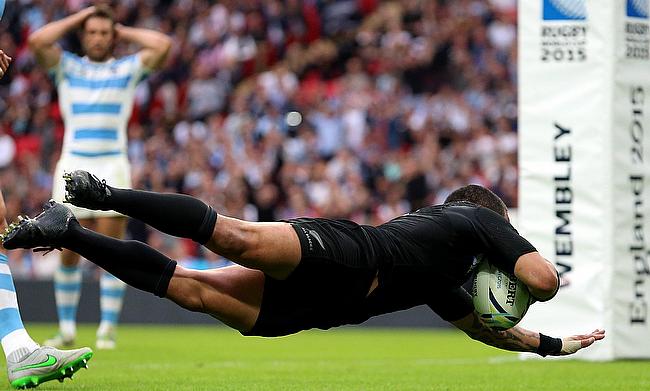 A final-quarter surge saw New Zealand open their World Cup defence with a 26-16 victory over an impressive Argentina at Wembley.

A first win for the Pumas over the All Blacks at the 22nd attempt would not have been the biggest of surprises in the tournament after Japan's defeat of South Africa, but it would have sent a message that the 2011 winners were beatable.

Once Aaron Smith scored New Zealand's first try after 57 minutes, to put his side ahead for the first time in nearly 30 minutes, the All Blacks never looked like relinquishing victory in their Pool C opener.

Sam Cane also touched down and Dan Carter scored 16 points in an immaculate kicking display as the two-time winners of the Webb Ellis Trophy prevailed.

It was far from straightforward, though, with Puma resistance and All Black indiscipline playing a part before the late flourish, when Sonny Bill Williams was influential.

Referee Wayne Barnes has history with New Zealand - it was the Englishman who was blamed for the favourites exiting the 2007 tournament to France - and they were reacquainted in front of a record World Cup crowd of 89,019.

Few Kiwis could argue Barnes was wrong to sin bin first Richie McCaw - for tripping Juan Martin Fernandez Lobbe - and next Conrad Smith - for hands in the ruck - temporarily reducing the All Blacks to 13 players.

It contributed to the Pumas taking a 13-12 half-time lead, with the only try from Guido Petti, who could not continue after sustaining a blow to the head in touching down.

Nicolas Sanchez kicked three more points in a tally of 11, but Argentina could not breach the black wall again in the second half.

Minnows Namibia are next up for the All Blacks at the Olympic Stadium on Thursday, while Georgia play Argentina in Gloucester on Friday. Tonga are also in the group.

Three Carter penalties - the second after Pablo Matera was sin-binned for offside, preventing a likely try - appeared to show the holders were in control.

But the Pumas, back to 15 men, then bludgeoned through the vaunted All Blacks defence.

Tomas Lavanini was stopped short of the line before his second row partner Petti barged over.

He was caught by Carter's boot as he scored and could not continue. Sanchez converted.

Sam Whitelock felt he was impeded by Tomas Cubelli as he tried to reach Nehe Milner-Skudder's inside pass with the try-line in sight.

Nothing was given and next McCaw cynically stuck out his right leg to trip Fernandez Lobbe as Argentina took a tap penalty.

Even the All Blacks captain, a master at the dark arts, could not escape sanction under Barnes' nose. Sanchez kicked the penalty to put the Pumas in front.

Fine Argentina defence frustrated New Zealand, who next had Conrad Smith sent to the sin-bin for hands in the ruck as the Pumas countered.

Sanchez kicked the resulting penalty, but Carter responded with his fourth after McCaw had returned to the field.

Another Sanchez penalty, this time after an Owen Franks offside, enhanced Argentina's lead, but New Zealand seized control once more.

Williams made an instant impact off the bench and saw an offload dropped by Milner-Skudder with the try-line beckoning.

Marcelo Bosch was penalised for offside as the All Blacks exerted pressure and Aaron Smith darted round a maul, evading Cubelli, to score. Carter converted for a three-point lead.

New Zealand scented blood in their tiring opponents, but Kieran Read's pass was too far ahead of McCaw and next Aaron Smith's pass was dropped by replacement Cane.

Cane completed an overlap after the All Blacks sucked in defenders and Carter converted for a 10-point advantage.

Beauden Barrett had a score chalked off for a knock-on and the All Blacks were unable to breach the Argentina line again.