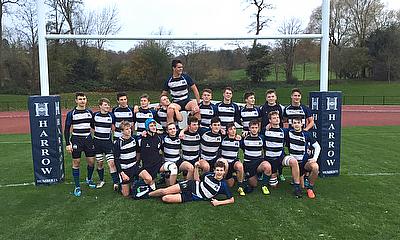 An additional week of third round fixtures in the Natwest U18 Schools Cup saw just seven matches take place, with Portsmouth Grammar School and The King’s School Worcester scoring big.

Two-time champions Whitgift School travelled to The Harris City Academy in Crystal Palace, and returned having put in a stellar attacking performance which saw the match end 42-0 in their favour.

Two tries from Sam Morley were added to by Rordon Daws, Captain Sidney Holland and Noah Ferdinand, while Morley also put boot to ball and converted four of the tries, as well as knocking over three penalties.

Still yet to concede a single point in the tournament, Whitgift will face worthy challengers Hurstpierpoint College next week, who beat Christ’s Hospital School 55-8 in their third round fixture.

A valiant outing for St Olave’s Grammar School didn’t pay dividends as they were beaten at home by Sir Joseph Williamson’s Mathematical School by a score line of 43-27.

With two tries each for D. Mathers and H. Edwards, added to by W. Edmonds, a poor day of kicking saw A. Lamberti convert only one of the five chances as SJWM School ran away with the victory.

An entertaining encounter between Harrow School and Reigate Grammar School resulted in a stunning Reigate win against the odds, sealing the game by 25 points to 18 away from home.

Two tries from Reigate’s Max Coyle, added to by James Ashford, proved vital, while the boot of fly-half Lucas Overtoom secured the victory, kicking two of the three conversions as well as two penalties.

Reigate Grammar will now face Hampton School, who edged past Berkhamsted in the third round.

The Portsmouth Grammar School secured the biggest win of the week, seeing off Hampshire Collegiate School by a huge score line of 53 points to none on home soil.

The south-coast side will now face King’s College of Taunton, who secured a 48-12 victory in the third round against The Gryphon School.

The division’s second game of the week saw Wycliffe College keep Farmor’s School at bay for the entirety of the match, sealing a 15-0 victory at home.

Wycliffe’s Hartson and Caeser both carried the ball over the line for tries, while a conversion and a penalty from Goodwin sealed off the win.

They will now go up against Stowe School in the fourth round.

Winning by a huge margin of 46-0, The King’s School, of Worcester, sailed in to round four after defeating Adams Grammar School.

A hattrick for Hollis was accompanied by tries for Smalley, Bateson, Maymon and King, as well as two conversions apiece for Deehan and Pritchard, with Deehan also knocking a penalty through the posts.

The Worcester side will face Ellesmere College in Round Four, following their 22-5 victory over Wrekin College in last week’s game.

Nottingham High School crashed out of this year’s tournament in the third round, following a bruising 34-8 defeat against Oundle School.

A try from Edward James and a penalty kicked by Patrick Smith just weren’t enough to get the upper hand, and Oundle went on to dominate the game.

In the fourth round the Peterbrough school will face Leicester Grammar School, following their victory over Trent College last week.

The only game scheduled to take place in this division was postponed due to bad weather in the North-West, and so the game between Stonyhurst College and Lancaster Royal Grammar School will take place on Saturday.