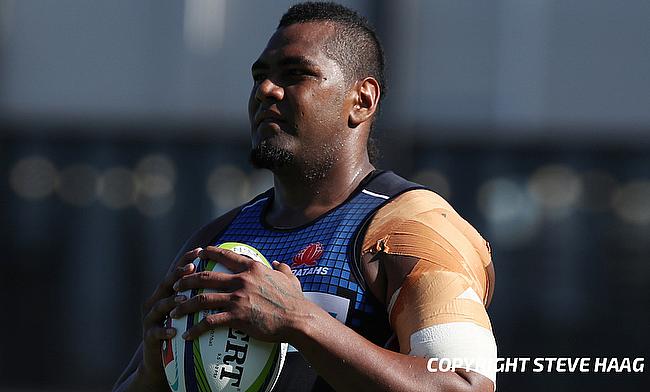 Since moving to Northampton Saints, Taqele Naiyaravoro has certainly had an impact
©Steve Haag Sports

A man mountain, Taqele Naiyaravoro walked through the Franklin’s Gardens south stand with a smile on his face, before introducing himself to Talking Rugby Union in perhaps the best way ever; “How goes it, legends?”

Weighing 131kg, according to the Northampton Saints website, Naiyaravoro used every kilogram of that weight to good effect for his club last season, scoring 11 tries as the Saints finished fourth overall, a huge improvement from the season before when they finished ninth.

Joining up with his new club fairly late due to his involvement with the Waratahs in Super Rugby, the Fijian-born Wallaby admits that he was surprised to be involved with Northampton so much early on in the season.

“I got a lot more game time than I thought I would,” Naiyaravoro said. “I jumped straight into it. I thought that because the boys had worked really hard in preseason, I would come in at the back of the line. I was excited with the challenges that were being thrown at me, the main challenge for me was to keep up the performances at the top, especially after the back to back seasons of Super Rugby.

“But the coaching staff and the S&C’s gave me their permission to put my feet up a bit, but I accepted any challenge that came through. I enjoyed it, we reached the place that no one thought we would, reaching the top four and I was happy with the result that we got and I’m looking forward for this season.”

"Not many people in the Premiership have ever done that!"

This is a health and safety warning:

Starting 27 games last season for Chris Boyd’s side, Naiyaravoro made the most meters in the Premiership. Drawing comparisons throughout his career to the late Jonah Lomu, the Australian broke tackles with ease at times last season, often carrying the ball as if it were a peanut in one hand.

It was on Naiyaravoro’s opposite wings that one of Northampton’s youth players enjoyed a breakthrough season. Ollie Sleightholme scored seven tries in seven appearances for the Saints and is just one prominent example of a Northampton youngster making a go of it in the senior team.

Both Lewis Ludlam and Rory Hutchinson had impressive seasons for the East Midlands club and gained international recognition as a result. Ludlam has even found himself in England’s 31-man squad for the World Cup, whilst Hutchinson was controversially not selected by Gregor Townsend, despite two very good performances in the dark blue of Scotland.

“I was really impressed by both of them, especially Rory,” Naiyaravoro said. “He had, I think, eight months to prove himself in the last year of his contract with Northampton. He did a bit more than that, getting into the Scotland squad, so really, really proud of him.

“Lewis too. Within a year or something, they got him from the academy, playing for Northampton and now he is playing for England. Anything can happen. The boys worked really hard last season and I think it is really well deserved.”

Despite being aged only 27, Naiyaravoro has already had a fairly expansive professional career in rugby. Starting off as a rugby league player for the West Tigers in Sydney, Naiyaravoro won several caps for Fiji before transitioning to rugby union in 2014.

Playing club rugby in Sydney, Naiyaravoro was quickly picked up by the New South Wales Waratahs. Receiving his first caps for Australia in 2015, the wing was left out of their World Cup squad for that year. Signing a contract with Glasgow in the meantime, Naiyaravoro scored nine tries for Warriors before moving to Japan for a season and then back to the Waratahs.

Quickly becoming an integral part of the ‘Tahs team once more, the side, led by former Leicester and Bristol centre Daryl Gibson, reached the semi-finals of Super Rugby prior to Naiyaravoro’s return to the northern hemisphere with Northampton.

Having been overlooked by the Wallabies for much of the last four years, Naiyaravoro has been confined to watching his adopted nation from home but has regularly been involved with the Barbarians when made available by his club side. Most recently, he wore the black and white in June and the winger glowed with praise about playing for the representative side.

“Ah, it was my sixth one!” Naiyaravoro said. “I always put my hand up for the BaaBaas. It’s one of the most fun weeks that I’ve always been a part of. It’s not that the training isn’t that tough or anything, I think we get back to the reason why we play rugby.

About to enter his second season at the Garden’s, Naiyaravoro, like all of his Premiership colleagues, is raring for the new season to begin: “We’re looking to play our first preseason game against Leinster. It is coming really, really quick, but that’s what we train for. That’s what we work hard for week-in week-out, so it shouldn’t be a problem. It’s just getting the job done.”