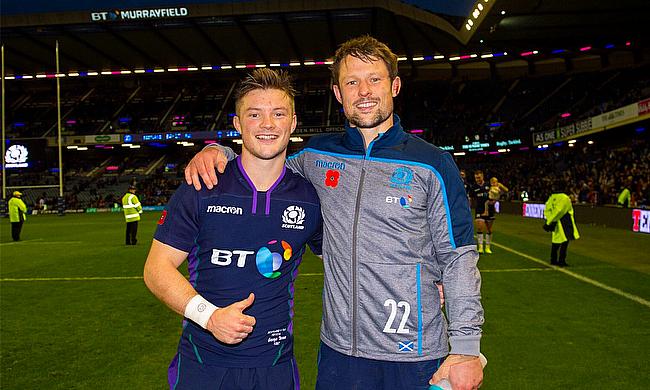 When Pete Horne and his younger brother George were growing up in Fife they dreamed of one day playing at BT Murrayfield together.

And on Saturday during the 54-17 Autumn Test victory over Fiji it became a reality when scrum-half George, 23, joined centre Pete, 29, on the field at the national stadium.

George came on in the 61st minute from the bench and while Pete was replaced 11 minutes later by Adam Hastings, you get the feeling that we will be seeing a lot more of the two Howe of Fife products together in a Scotland jersey.

This was the fourth time they had appeared in a matchday squad together, but the first time in a home game after matches in USA, Argentina and Wales earlier this year.

Pete has been around the national team set-up since 2013 and this was his 37th cap - head coach Gregor Townsend stating “it was one of his best performances for Scotland” - while ‘buzz bomb’ number nine George has taken to the international game like a duck to water in recent months and is a great option off the bench later on when games are stretched.

And after the Fiji match Pete was delighted to have seen his brother finally run out at the national stadium.

“I was buzzing for him,” he told TRU about his sibling and Glasgow Warriors’ team mate.

“He’s been champing at the bit for a game at Murrayfield.

“At the anthem we were standing together and it got a wee bit emotional. I’m really proud of him, very carrot he’s had he’s taken on and done really well.

“Every opportunity he gets he makes the most of, so I’m delighted. It’s something before the game you don’t think too much about [playing together for Scotland], mum and dad can enjoy it and our friends and family, but you’re just focusing on a game.

“It’s one of those that when we look back we will be really proud of this day - after the game I was delighted we got a couple of photos and mum and dad were very happy.

“I’m sure when our careers are finished it’s something we’ll look back on very fondly.”

Being a few years older than George and with a good rugby brain, Pete has mentored his brother through the years to get to this level.

He also helped Finn Russell come through the ranks with the Warriors before his summer move to Racing 92 in France.

And he was delighted to link-up with the stand-off again at the weekend.

“I said to him after the game, ‘I’ve missed you, you wee rocket’, it was good to get back out there with him,” he said of combining with the 26-year-old playmaker.

“I love Finn, he’s great to play outside and it was great to see him back smiling and having fun.

“I never know what’s happening with him. Over the last couple of years we’ve built a good relationship and he’s just got the ability to create something out of nothing.

“So although I want to throttle him at the time it’s great, that kind of attitude rubs off and it helps. He brings a real calmness around the whole back line. He’s a great player.

“We’ve done pretty well in the past together and long may it continue.”

Scotland are now back in camp at Oriam on the outskirts of Edinburgh preparing for South Africa coming to town on Saturday evening.

Horne senior stated:  “I won my first cap against them in 2013, that sticks strong in the memory, you never forget your first cap.

“I remember the bus journey back from training and being told that I was playing, a great moment.

“We’ve played them a few times since, in the World Cup in 2015 and a couple of other times.

“They are always unbelievable games against South Africa. They are in really hot form at the moment.

“We need to make sure we are ready for what will be a very fierce contest.

“South Africa will bring a massive physical challenge from the first minute to the 80th.

“Fiji were physical, but we know we have to step things up even another level this week.”