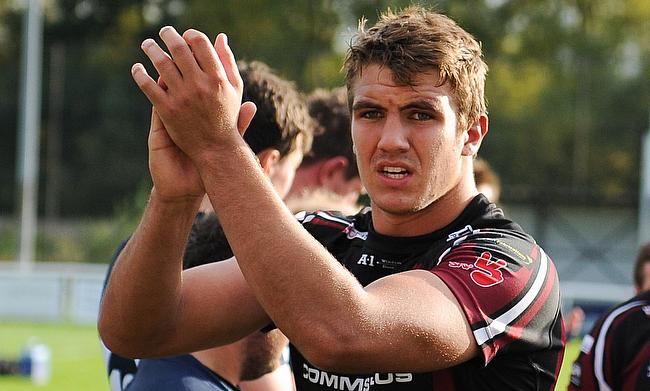 Taunton Titans do not have a game this weekend, but if you are walking past their clubhouse on Saturday afternoon and hear a lot of noise there is a good reason why.

Players and members of the Somerset-based National League Division Two South outfit will no doubt be watching England against New Zealand on the television and cheering Eddie Jones’ men on - but before that they will be feeling great pride at watching one of their own earn his first Scotland cap against Fiji at BT Murrayfield.

The England game starts at 3pm with Scotland kicking off at 2.30pm and, such is the high esteem that second-row Sam Skinner is held in at the Commsplus Stadium at Hyde Park, a few people may even be singing ‘Flower of Scotland’ pre-match.

That is according to Taunton’s forwards coach Chris Brown, the man who brought a young Skinner to the club back in the summer of 2013 alongside head coach Tony Yapp.

“I can remember Sam playing when he was at Torquay Boys’ Grammar School, he was always an athletic lad and myself and Tony were keen to get him to the club,” Brown said.

“We knew his parents so we had a word with them and during the summer after he left school in 2013, he joined us for pre-season training.

“At the time I was a bit nervous because he wasn’t the biggest, was very young and did not have a lot of meat on him, but he had a tremendous skill set.

“So what we did was get him really involved with the senior squad in pre-season and he made his debut against Exeter University and then, once the season had started, he came off the bench in one game after being drafted in at the last minute, caught a kick-off and went half the length of the field to score a great try.

“By that stage he was on Exeter Chiefs’ radar and they were having a look at him when he was playing for us. He was due to head off to university in Loughborough [in 2014], but the Chiefs wanted him to stay locally and get involved with their training.

“At one point, he had an injury [and was rehabbing with the Chiefs] and the next time I saw him a few months later, well to say there had been a transformation would be a big understatement.

“He had clearly been working hard in the gym and looked like a real athlete. Decisions had to be made in the summer of 2014 so the coaches, Sam and his parents sat down and thought that the best thing for him was to go to Exeter University and firm up his links with the Chiefs.

“That is what he elected to do. He kept his links with us, played university rugby and trained with the Chiefs - and the rest, as they say, is history.”

Now 23, Skinner captained the university team to BUCS Championship success in 2016 and made his first team debut for the Chiefs in the LV=Cup against Gloucester in November 2014 before later going on to make his Premiership debut against Northampton Saints.

Along the way, he represented England at under-20 level, but - with a passionate Scot for a father – he was also involved in the Scottish Exiles programme.

He almost went on the summer tour with Scotland a few months ago, but head coach Gregor Townsend wanted to see him get off to a flying start to this season.

Skinner has certainly done that - and Brown believes his former protégé has a very bright future ahead for club and country.

“The thing that makes Sam stand out from others is his attitude,” Brown continued.

“From the first time he trained with us, we could see that he was a bright lad, but he is also a great team player.

“I know in modern day rugby that is not everything, but the way he goes about things and the standards he sets helps takes other players with him to a different level.

“He had leadership qualities from his teenage years in our team and this attitude that he has plus a great athletic ability will serve him well going forward.

“Obviously international rugby is a big step-up, but whenever he has gone up a level in the game, he has always risen to the challenge and I am sure he will do a great job for Scotland.

“You could not meet a more humble, hard working and all-round good guy than Sam and I will be a very proud man to watch him run out for his country this weekend.”

Skinner is one of nine changes to the Scotland starting XV that lost to Wales 21-10 last week.

Star men like captain Greig Laidlaw, stand-off Finn Russell and full-back Stuart Hogg return while Townsend said of Skinner’s inclusion: “We’re looking forward to seeing how he plays. He’s a very mobile second-row and a lot of his strengths align with what we’re looking for in our players.

“We’ve got to make sure we’re very strong in the set piece.”