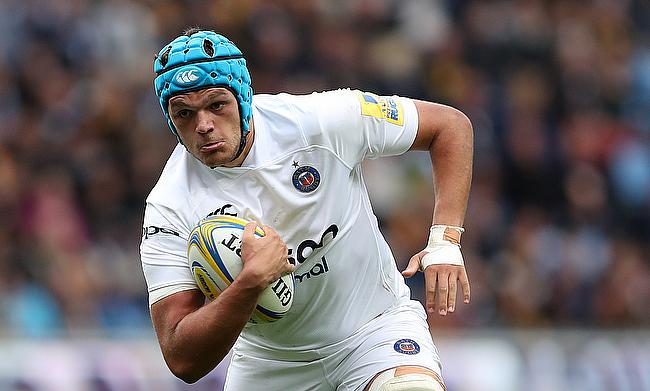 Zach Mercer scored both the tries for Bath Rugby
©PA

Zach Mercer scored a double as Bath Rugby managed to edge out Northampton Saints 23-22 in the latest round of the Gallagher Premiership at Franklin's Gardens.

Northampton looked in comfort as they held a 19-3 lead in the opening half-hour but they let things slip as Mercer's double helped Bath to come from behind and seal a thrilling win.

The win has seen Bath consolidate their position at 10th place while Northampton are at fifth despite the defeat.

Northampton looked favourites to open the account first as Rory Hutchinson led the attack but was stopped from scoring following a tackle from Miles Reid. However, four minutes later, Tom James dotted down at the back of the maul and as the first quarter was about to end, the scrum-half got his second after capitalising on the offload from Taqele Naiyaravoro.

Francis missed the conversion on the first attempt but scored in his second as Northampton raced to a 12-0 lead. Rhys Priestland led Bath's response with a 23rd minute penalty kick but Northampton extended their lead further when a well-timed pass from George Furbank sent Tommy Freeman over the line making it 19-3.

Stuart Hooper's men suffered a setback when skipper Josh Bayliss left the field injured in the 31st minute but they managed to finish the first half on a high as Mercer forced his way over and Priestland kicked his 29th successive kick as he broke the record previously held jointly by Jonny Wilkinson and Mark van Gisbergen.

Northampton thought they had scored 12 minutes after the break when Lewis Ludlam touched down but it was turned down as the television replays showed the flanker had lost possession. Meanwhile, Priestland kicked two more penalties that reduced the gap to 19-16 before Francis with a three-pointer of his own restored six-point lead for the hosts.

The decisive moment came in the 68th minute when Ben Spencer's chip was gathered by Josh Matavesi, who sent in Mercer for his second try and Priestland's conversion took the visitors to a one point lead. Bath also managed to survive a scare in the closing minutes when Matt Proctor was held up by Spencer to seal a thrilling win.