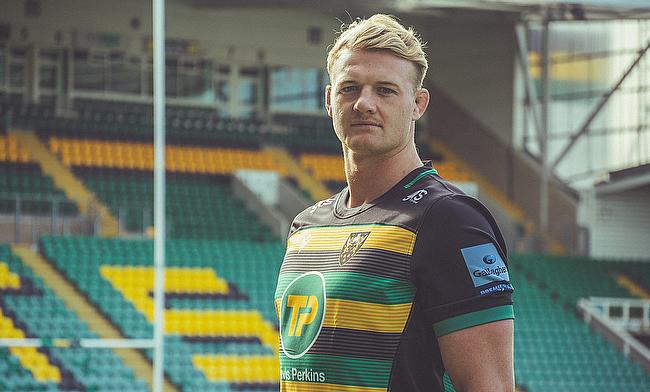 Whilst Northampton’s win over Exeter Chiefs last weekend ended in some drama, it was actually the Saints' fourth Gallagher Premiership victory in a row.

As a result, Chris Boyd's side now sit fourth in the table and they seem to have left their torrid start to the 2020/21 season behind.

After losing away to Sale in the opening round, defeats to Harlequins and Bristol Bears soon followed. Things would not improve too much in the Champions Cup, but this isn’t to say Northampton weren’t competitive.

Apart from maybe their 49-29 home loss to Harlequins, the Saints were often in the hunt for four points by the time the final 10 minutes came around, but it was in those crucial moments where mistakes proved costly.

Northampton's woes were perhaps most notably summed up against Bordeaux in the Champions Cup when Matthieu Jalibert’s penalty cannoned off the uprights before being scooped up by Santiago Cordero, who crossed the whitewash.

Those points won the French team the game and it felt like it would be a long season’s viewing for those supporting the Midlands club. Instead, the Northampton squad decided to give their fans something to cheer about going into the New Year with a 29-10 victory over Worcester Warriors at Franklin's Gardens.

Due to the Covid-19 pandemic, the Saints only played on one occasion in January as their games against London Irish and Leicester Tigers were called off, with Northampton gaining six points as a result.

In truth, their encouraging run of recent results properly started against Gloucester, where they picked up a 31-26 win at Kingsholm at the end of last month.

Victories away to Wasps and champions Exeter - either side of receiving four points following the cancellation of their clash with Newcastle - has changed the mood around the Gardens, and David Ribbans feels a key reason for Northampton's upturn in form is down to believing in their structures.

“We lost in the semi-final (in the 2018/19 Premiership play-offs), we got a few things wrong that day, but that season we played some great rugby and even before Covid, we had played some pretty decent rugby. I think overall, it was a bit of confidence lacking, but we stuck to our processes and it has eventually come right.”

Ribbans arrived in Northampton three-and-a-half years ago from his native South Africa, the second-row having established himself as a regular at Franklin’s Gardens not long after. He has now made over 70 appearances for the club and the 24-year-old's efforts at the domestic level have not gone unnoticed.

Gaining his first England call-up in October 2020, Ribbans qualifies for the national side thanks to his grandfather from Enfield. Remaining in Eddie Jones' squad for the conclusion of the Six Nations and the Autumn Nations Cup, he would not step out on the field to make his international bow.

Describing his time spent at the Lensbury as a ‘great experience’, Ribbans is honest in saying that he still harbours hopes of becoming an England regular. The lock forward admits that he must continue to play well for Northampton to be considered for selection again.

“I want to get that international cap and be a part of that,” Ribbans said. “It is every professional sportsman’s dream and goal, so still pushing hard for that, but at the moment, I am just trying to focus on Saints and do well for Saints. That is all I can do.

“I don’t think about it (selection). I think there was probably a time a couple of years ago in my career where I was a bit worried about that and would think about that. I know it is super cliché, but I am just focused on Saints.

“That is all I can do to play on the international stage. I have to play well for Saints first to even get a chance there. I am just enjoying my rugby here. I know what the coaches all want from me here at Saints and I am fully focused on just playing well for the club and if anything comes from that internationally, that is obviously a great reward and achievement. I’ll take that.”

What a start for @SaintsRugby ??

It was a kick that would have won the game for Exeter and a performance symbolic of the turnaround in form and spirits in the Saints camp.

It was a hard-fought win for Northampton, the side having to dig deep in quite frankly atrocious conditions in Devon. In many ways, it was a different Saints victory to what we are used to, with the forward pack the most dominant force across the fixture and Ribbans was quick to agree.

“I think everyone is so used to the way Saints play being with this flair and this great attacking backline and on our day, we can score five, six tries within 10 minutes,” Ribbans said.

“We have struggled at times for 80 minutes to front up and when things get tough and it is a tight, gritty game, sometimes our forward pack has struggled with that. I think for us as a squad now, that was the biggest thing.

“We made it tough for them to score, which in the past they would score too easily. They would make it to that five-metre and we know how good their pick and go is, but we made it really tough for them and at set-piece time, we really took it to them.

“It was a different type of Saints win. I think that was really important. We can’t always play that fancy, attacking rugby that people like because sometimes you just have to grind it out and I think that is really positive for us as a squad.”

Coming up against Bath on Sunday, Stuart Hooper's side pose a similar threat to Exeter as the Blue, Black and White's pack has been their driving force since the Premiership returned last summer.

This has been highlighted recently with Tom Dunn making 34 tackles against Sale Sharks two rounds ago whilst they were also able to grind out a derby win against Gloucester last Friday.

“I know currently their [Bath's] results haven’t been where they probably should be,” Ribbans said. "We haven’t really been focusing too much on that because we know on their day they have the quality of players to beat anyone. We are not taking them lightly.

“Of course, there is a confidence in our camp from the weekend, there is no denying that, but at the same time, there has been no complacency. We had a great training session today, a tough training session, and we know what is coming this weekend, another massive physical battle and we are going to have to go again this weekend.”